We had a cold walk again this morning and by the time we arrived at Meisters the snow flurries were flying. Eva Jean, Diane and I had more mail today than Tuesday. 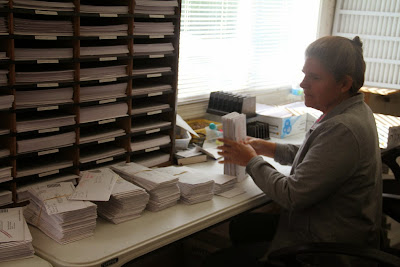 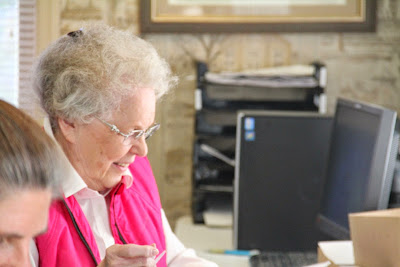 We were short Emily and Rhoda. Emily had to get tested for drugs for her CNA class and Rhoda is working on wedding plans.  We were very thankful when Lisa arrived with 2 of her children, Maddie and Dillon and did we ever work them. 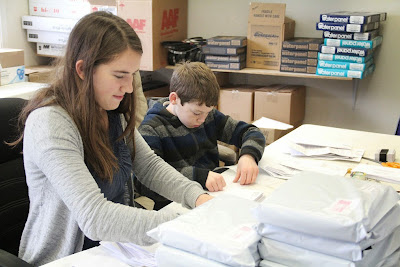 We were able to process all the studies, all the letters, fill all the requests and got all the stuffing finished and mailed out. Click here for the  Berean BlogWe had Mark come to lunch with us so he could help unload all the heavy boxes of Bibles.  I was in a big hurry to get home I needed to get  Missy, Cookie and Katy loaded into the trailer and meet Karin at Middle Grove after work. Emily helped load then off we drove sending Karin a text that we were running late. We arrived to find the gate open and Karin up on the hill with Soul, Oksana and a few others. We unloaded and tied up Missy and Cookie and were going to unload Katy when the herd came galloping down to the trailer. The 2 walkers were quickly untied and they promptly took the herd with them as they galloped over the hill and out of sight. That would have been fine except they took Soul's colt with him and he was suppose to go with us. Karin is holding Soul who is having a fit calling for her colt when Oksana realizes there is new horse by the trailer and came galloping down. Katy was unloaded and took off running. 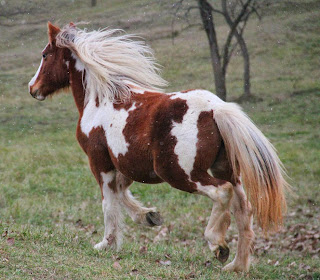 Oksana came prancing down to meet her all ready to show off for the new kid on the block. Oksana is a gorgeous 2 year old Friesian filly out of Eliza by Raven. She is one of the special ones we kept. 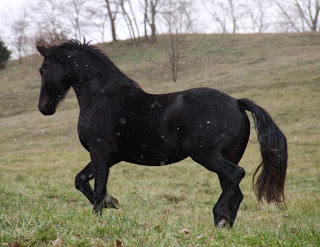 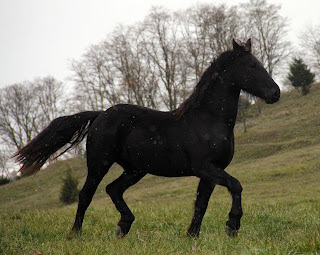 Oksana who thinks everyone loves her runs right into Katy and Katy kicked out at her. Notice the snow in the pictures, the flurries were flying the wind was blowing and we were freezing! Soul is dancing around Karin calling all the while Oksana and Katy are galloping around them.
Emily hiked up to get Ayanna and her filly in the hopes that Soul's colt would come back and brought with her the herd again. Our plan was to bring home Soul's colt and Ayanna's filly for weaning leaving Ayanna. Karin's plan was to load Ayanna and Soul into the front then when the foals were in take Ayanna out the side door. Well Ayanna and Violet loaded right up, Soul was on her way to the front but for some reason I thought Karin wanted Ayanna unloaded out the side as she was bringing Soul up so there would be room. I opened the door, Ayanna jumped out, Violet tried to but the door was slammed shut so she decided to burst out the back. Oksana sees that no one is guarding the back of the trailer and jumps in as Karin is trying to hold Violet in the front of the trailer. I opened the door to stick Ayanna's head in so Violet would leave Karin and come to the front when Soul saw the door open and burst through. At that point we had Oksana in the trailer which Emily had to kick out and none of the horses in the trailer we needed to bring home. At this point Karin took over and told Emily and I exactly what she wanted done and wouldn't you know it worked. Soul was loaded and tied, her colt Ripper was loaded and tied, Ayanna and Violet were loaded into the back, Ayanna unloaded and the divider shut as Violet was locked in with Soul and Ripper. About this time Karin is wondering if I should have been tested for drugs instead of Emily.  Emily hiked back up the hill to bring Rhiannon to the trailer. She needs her travel papers before she leaves at the end of this month. We still needed to get the truck and trailer out of the field without letting any of the mares out. Karin was in charge of opening and shutting the gate behind me as Emily shewed away the horses. By the time we were on the way home we felt like we had just been through an episode of Keystone Kops. What was actually amazing is all of this happened in less than 40 minutes. We made it home with enough daylight to settle the horses in next to Killian. Violet has attached herself to Rhiannon so her weaning is going well. We will wean Ripper tomorrow.
Posted by Judy Sceggel at 9:20 PM