There really was no time to blog yesterday other than the short moon/campfire shot. Yesterday the weather was unusually beautiful, cold on the walk with the temperature in the 40s but the sunny and clear. I had to cut the walk short as I was needed in East Peoria doing one of my favorite jobs (play) watching Braelyn and Taegan. By the time I arrived home it had warmed up nicely into the 70's. Steven was here. He announced he will be moving to St. Louis, he was hired to be the equine manager at one of the top rated therapeutic riding centers in the country, Therapeutic Horsemanship. We are so pleased for him. While telling the good news he helped bring Hadassah and Solomon into the outdoor arena for a short video.

A few new pictures were taken of this little almost month old show-off. 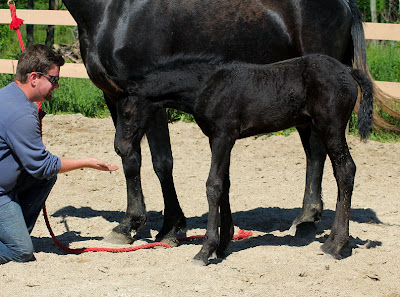 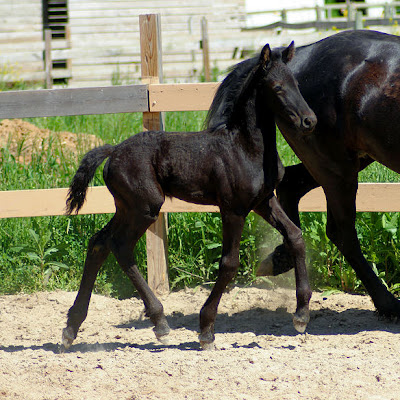 He is really spectacular and very friendly.
Lexi was teased and thankfully she said "NO." Her count down will continue here, her owners would like to leave her until she is confirmed in foal. Steven groomed up the boys before putting them back now into their separate pastures. He didn't believe me about their fighting and was shocked at how they now act towards each other. It was just 3 weeks ago they went swimming together still friends. Mark and I left for Middle Grove around 6:30pm and arrived just in time for the safari tour with the Redneck Rover. 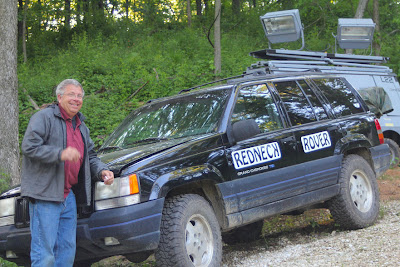 They held off so I could take a few pictures of this unusual camp. This is in a hollow down by a creek completely isolated from the outside world and yet they have electricity by solar panels, running water via the creek, a huge generator if needed, even television. 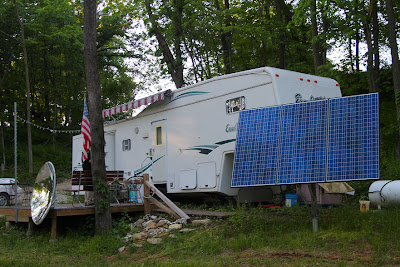 The solar panel in the picture above supplies all of their electricity until they turn on the generator that big round mirrored dish thing is not a satellite dish it is a solar cooker. 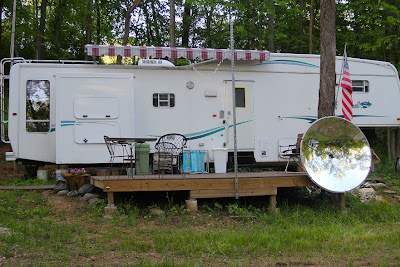 Below is mom in her motor home while Heidi keeps a watch on her. Mom is staying with Faith tonight, then Joan & Tim will be joining her. 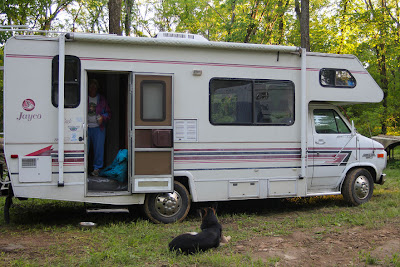 We loaded up with Faith and I in the rumble seat and headed out to visit the wild country. Below are a few scenic shots of our experience. 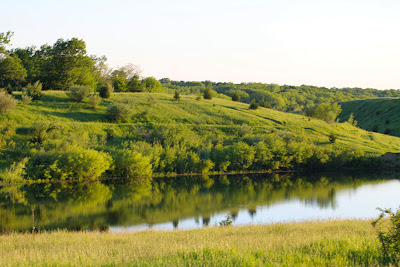 Above is one of the lakes and below up on a hill over looking a beautiful valley. The locust trees are blossoming and the entire trip our noses were delighted with a pleasant sweet perfume. 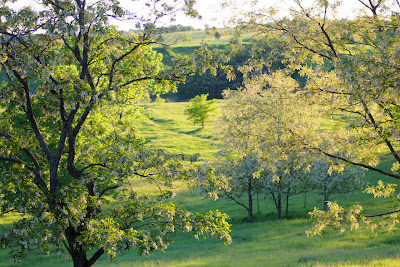 The lakes are so impressive for Illinois. Psalm 23 just kept running through my head, He maketh me to lie down in green pastures: He leadeth me beside the still waters. 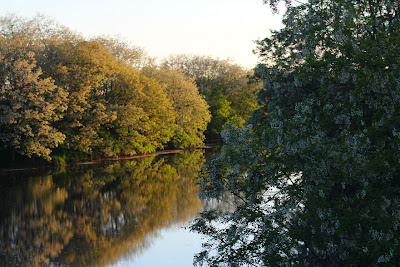 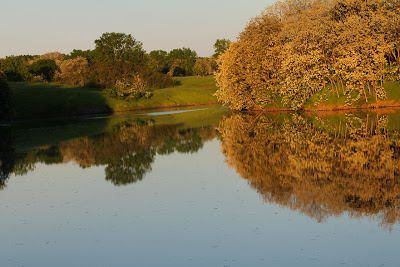 Below is the jeep with Faith and I on the rumble seat. At one point we scrambled inside sure the jeep would roll, some of these hills are steep. 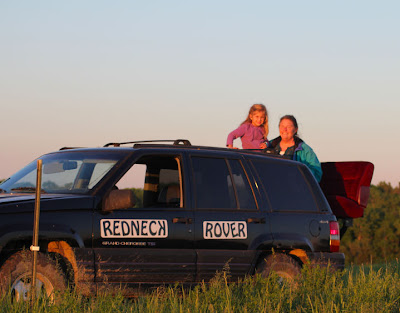 Most of the time Mike and Diane led the way scouting out the best way through the creeks and hills. 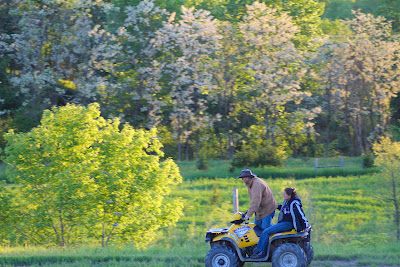 Spark and Rhonda were asked to get together and act like they like each other. I think maybe they really do. 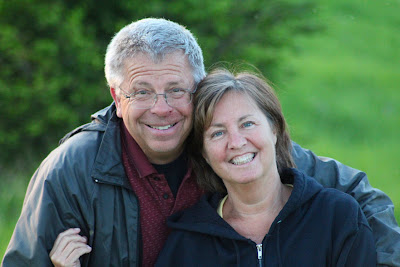 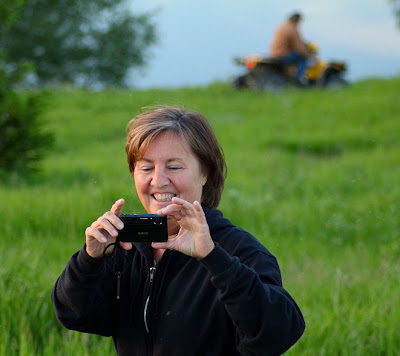 Mom was sure Ebby was getting tired and asked Diane to give her a ride on the 4 wheeler. That didn't last long. She was soon off and running. 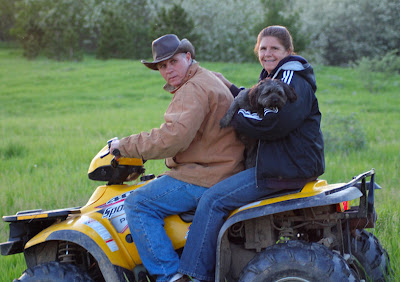 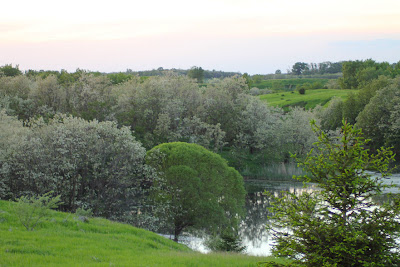 A couple of pictures of the pleasant green pastures and cool still waters. 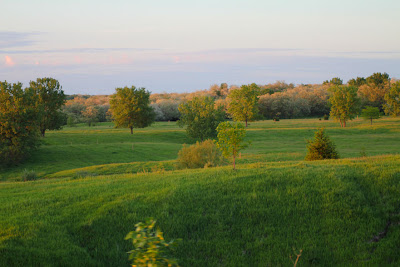 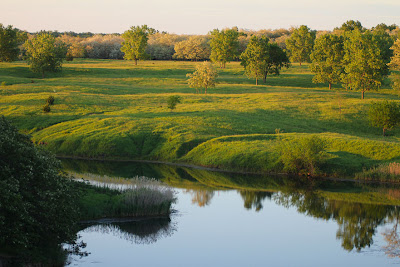 And now for the best part of the tour, the wild band of horses we came across. 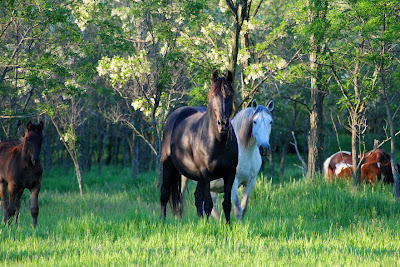 Above right to left is Rosalie, Lily, Sangria and back into the woods, Ella and Scarlet. Below is Jasper and Jewel in the front. 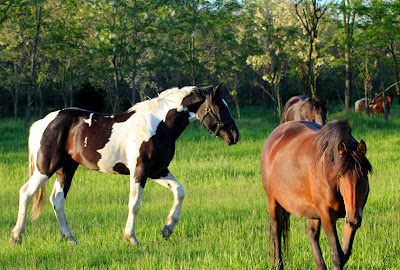 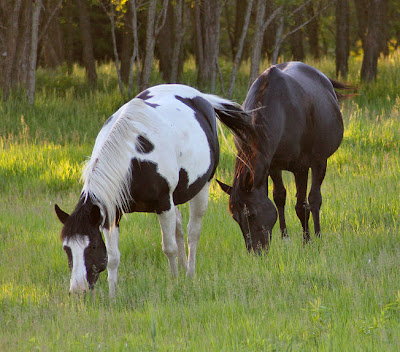 Lola and Mytross above Star below 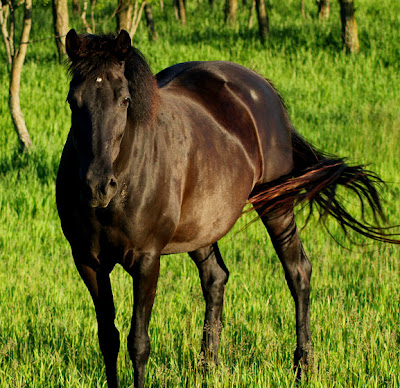 Sissy below enjoying the pleasant pastures. 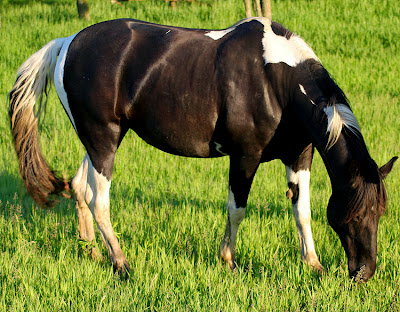 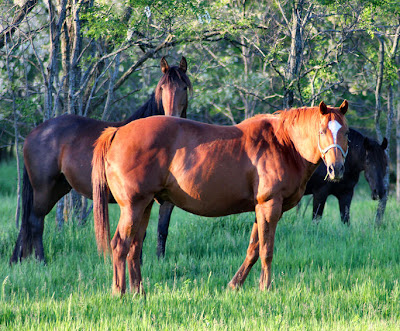 Mika and Jewel above Lily and Sangria below. 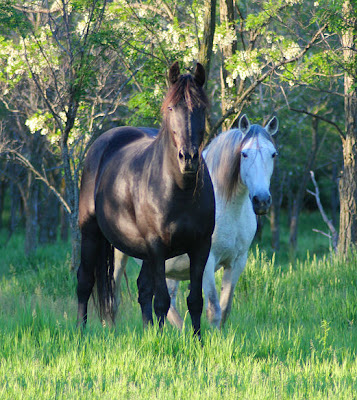 Not only are they not wild they came up and surrounded the jeep. The camera was outfitted with the zoom lens so no shots of that could be taken.
The weather has changed dramatically from yesterday, it is cold, cloudy and threatening rain. Mark is working on the stallion paddock and is hoping to finish removing manure before the rain hits. And I can't close this post without wishing my best friend Amy Koch a special birthday greeting, she is now older than I am for a few more months.