In NEED of a Stock

We had a beautiful sunrise this morning as I was heading toward the walk. Rhonda took the picture below. 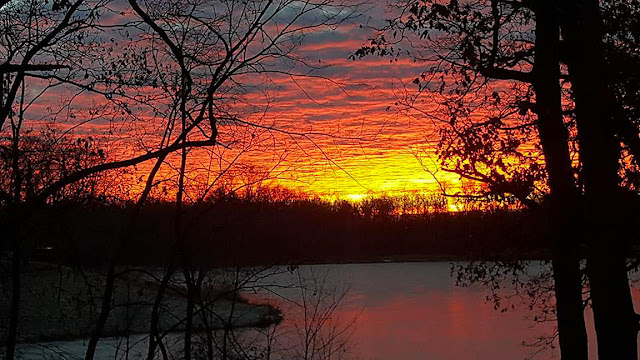 What a beautiful start to a Monday. Right after the walk and after the horses were fed it was time to start working the weanlings. They had been in stalls since bringing in for weaning on Saturday. Roxanne's filly was the first foal worked.  She was tied and groomed in the stall. She had a few burrs in her mane and tail and also one in her ear. She was excellent standing quietly even while tugging on the one inside her ear.  Valiant just seems to throw very sweet trainable foals. Her registered name is Giselle. She was taken out to the round pen and asked to move for pictures so I could update the website. She moves very nicely and it was easy to get a picture with all 4 hooves off the ground. 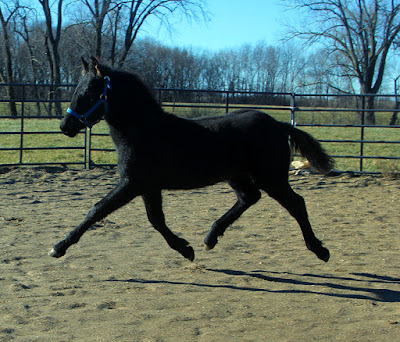 However those kinds of shots don't make the best conformation shots. She is a well built filly and the picture below shows how nicely balanced she is. 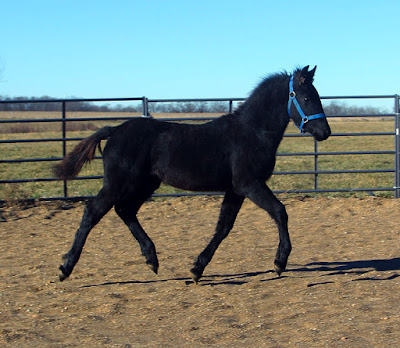 She was tied so her legs could be handled and she stood well for that also. 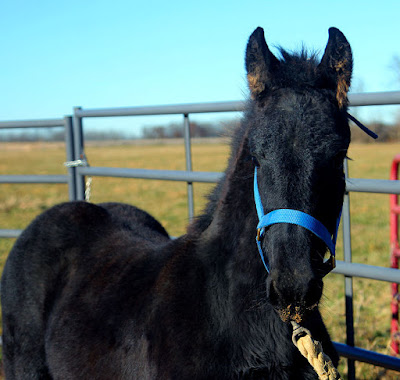 She was taken into the outdoor arena, given a leading lesson and another tying lesson.  I was just so very pleased with her behavior. 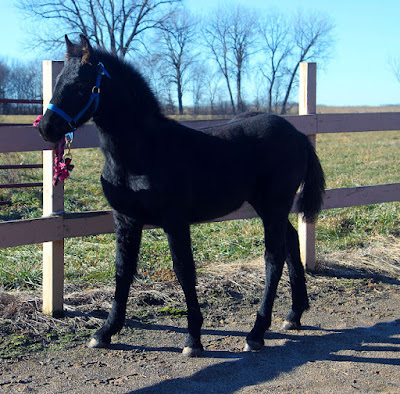 Giselle was born July 7th and is now considered weaned. She inherited the mega hair from her dam, check out that tail in the picture below. 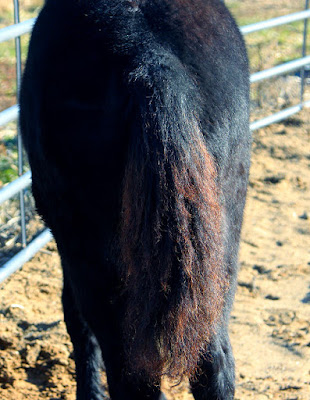 She is only 5 months old and already it is down to her hocks, thick and bushy. She is exactly what people want, a well behaved Friesian with HAIR! She is available for purchase for only $8000.00.  She is a good investment as she can make her purchase price back with her very first foal. She was led back to the stall and Missy's filly taken out. She was also groomed first and had practice leading in the indoor before taking her out to the round pen. Her sire is Evan and every one of Evan's foals have that BIG movement. 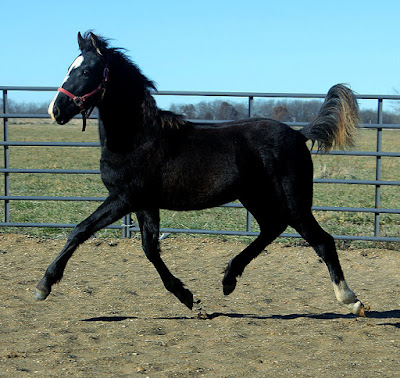 She is a very fancy mover and her owner will be well pleased. 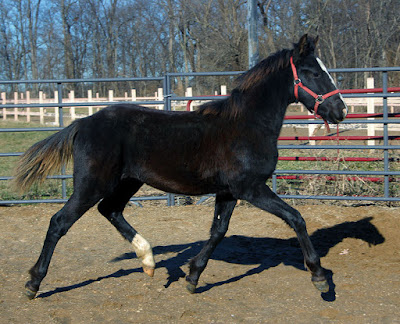 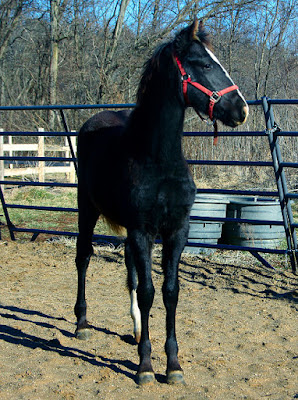 She was just taken right to the paddock instead of a stall then Roxanne's filly taken out to join her. They were initially put in with the other three weanlings but that didn't go very well. Foxy's filly was chasing them around until they ended up standing at the back of the paddock while the other three were in the shelter eating hay.  Tatiana's colt was then taken out. I couldn't find a halter that fit him and he ended up with a much too big halter for his tying lesson. 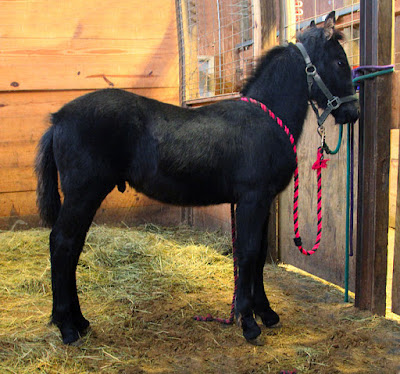 He was led out to the round pen and that ugly halter removed before taking a few pictures. He too moves nice and has a lot of hair. 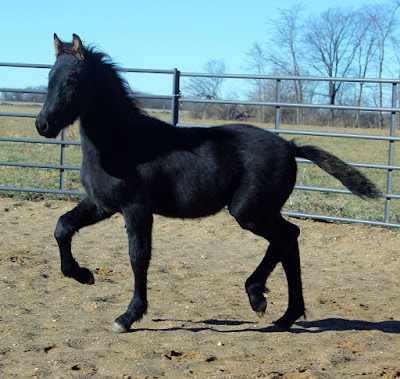 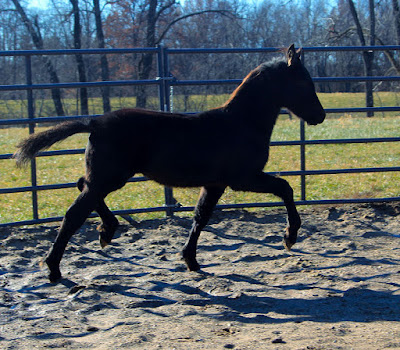 He was put in with Zalena's colt then grained. Both boys were so happy for the companionship they were eating out of the same feeder. 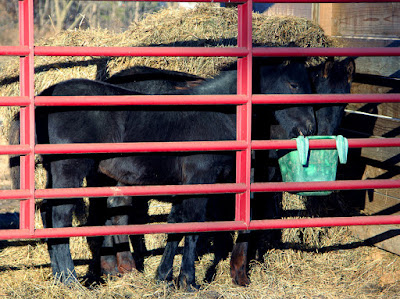 Karin arrived after work and helped me move the three older weanlings out of the far paddock into the middle paddock leaving the far paddock for Giselle and Amelia. Once they were all eating we pulled out Galena and Valiant for training.  Karin had Faith and Rebekah come to help with that today.  They started with round penning the 2 horses in the indoor then Rebekah got on Valiant while Faith rode Galena for the warm-up. 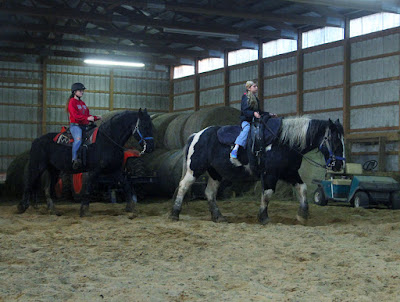 Karin had them do an exercise where one stayed in the middle while the other cantered around both directions. 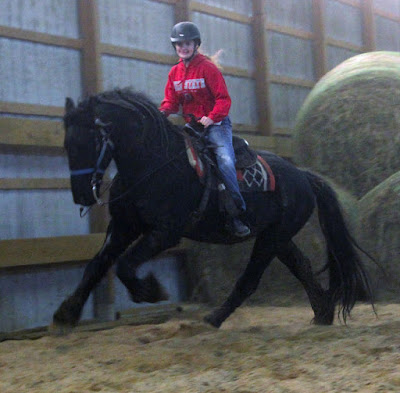 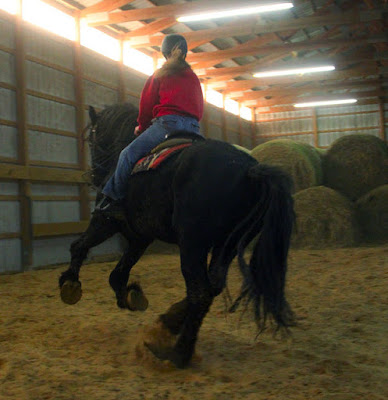 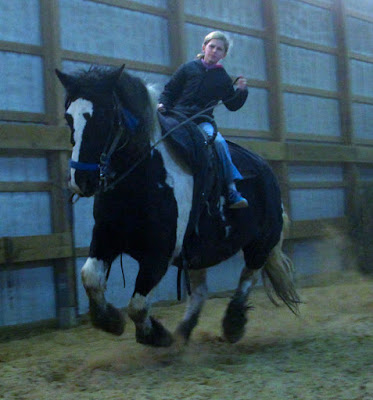 Then came the real reason for today.  Galena hates to be ridden double but with vaulting we need to have 2 and 3 vaulters on at the same time. Karin had Faith behind her as she asked Galena to move and did that ever make Galena mad. She tried her best to throw them off. 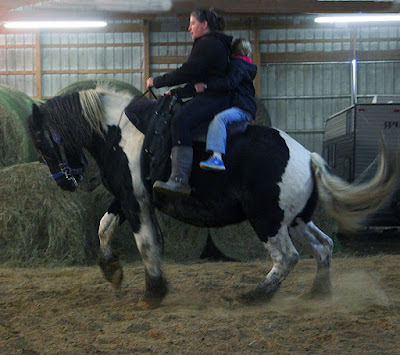 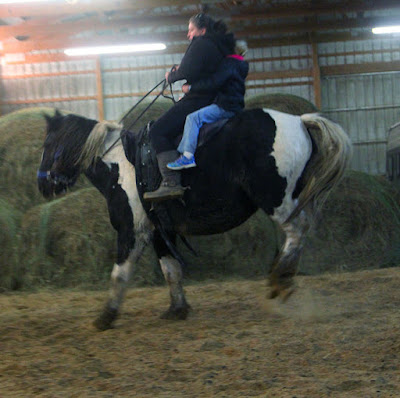 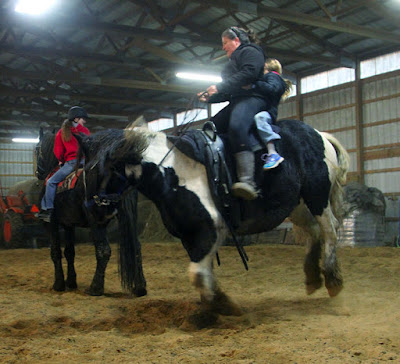 Good thing she isn't very athletic. After realizing Karin wasn't going to stop or get off she finally settled down and gave Karin a nice trot. 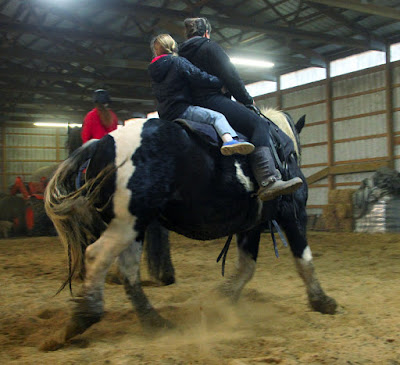 They finished up with letting her stand in the middle resting while Faith and Rebekah did some vaulting moves at a stand. 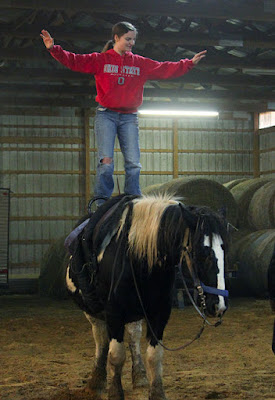 Mike took Ripper and Indy out yesterday and discovered the stock trailer has some major problems. It cannot be used without some extensive repairs.  We will plan on purchasing another stock trailer next spring but our specifications are non negotiable and 14 years ago we actually had to have ours special built.  We must have at least 7 feet tall, 6 feet wide, 18 feet long, a middle divider, an escape door at least 3 feet wide in the front section and it must be a bumper pull.  So far we haven't found a used one with those dimensions and may have to have another built. I have the 2 horse hooked up for any emergencies right now. I ordered 20 more small halters on Saturday, hopefully they will be here soon.
Posted by Judy Sceggel at 8:37 PM