From Dawn to Dusk

Today we worked outside from the earliest light until it was just too dark to see. It started of course at the stall barn with lights on but by the time Dakota and her filly were taken care of it was light enough outside to get the rest of the feeding done. Mark had Nick come help and together they worked on fencing until after lunch. We had 2 trail rides scheduled which Karin was in charge of and she took care of both. The first was for Bethany who was here visiting from Bluffton, IN. They took out Jenis, Anna, Missy and Cookie. I asked them to start in the arena as I had just finished pulling all of the weeds in there and before more pop up would like proof this job got done. Hanna rode Missy, Mackenson rode Cookie, Karin and Faith rode Anna and Bethany and Berlica rode Jenis. 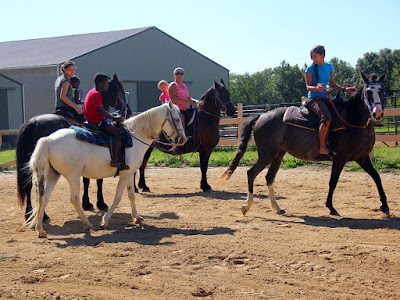 Below are a few fun pictures of their ride in the arena. 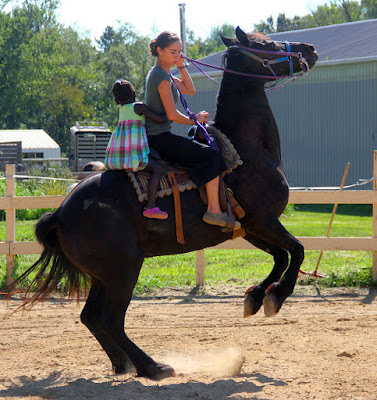 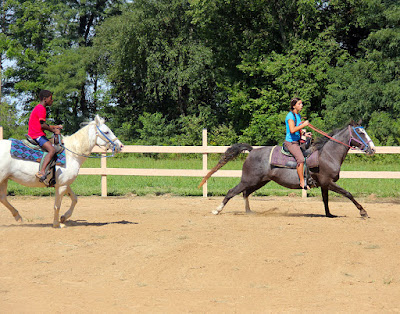 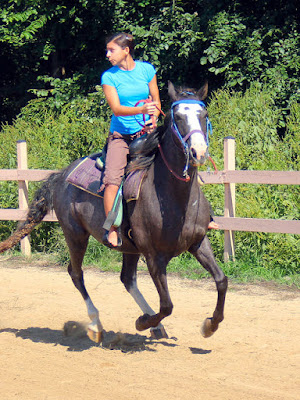 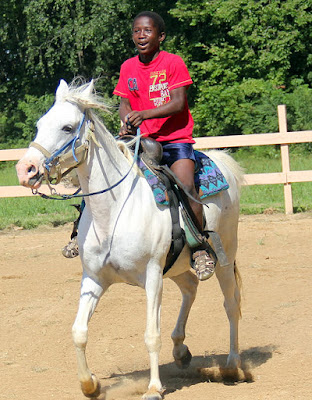 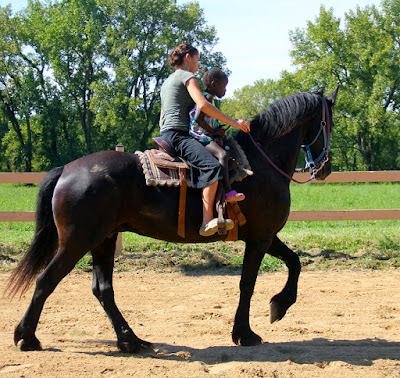 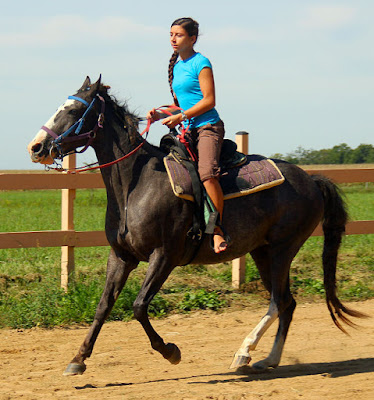 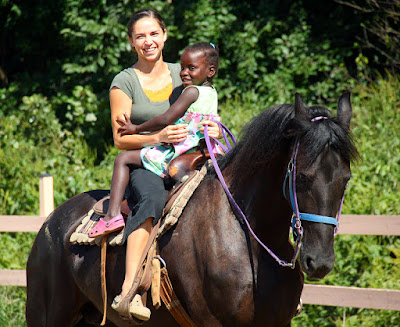 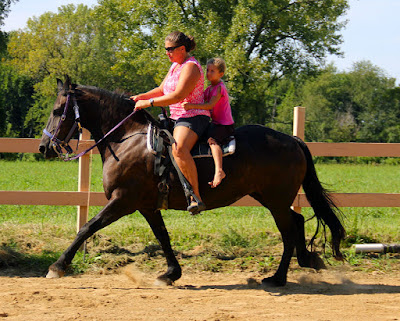 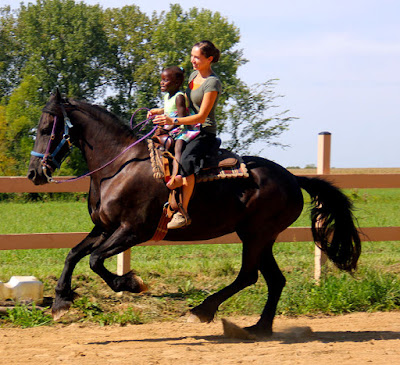 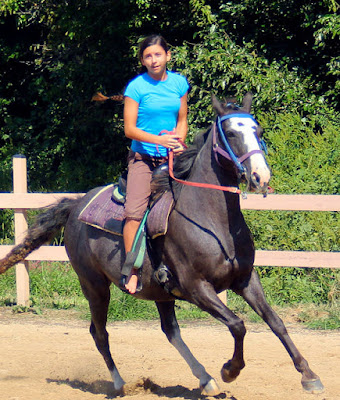 Next off they went across the field to do the 'death trails' backward. 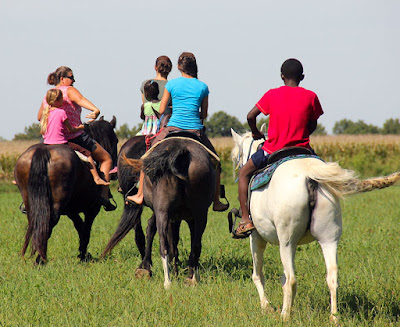 Right after Nick and Mark were served lunch I hooked up the stock trailer and headed for Middle Grove to bring back Joanna for weaning. Mike was working there with the tractor and road scraper and helped hold Lily back while I drove Joanna away. He and Diane took a long trail ride this morning at Middle Grove riding Bunni and Mika. Diane was just heading out on the jet ski with her grand kids when I arrived.  Karin was just heading out on the second trail ride when we got back to the farm and offered to help me get a few pictures when they got back. That trail ride was for Faith and Ava, Karin owed them as they helped her at the Library. Joanna was groomed up in the trailer and stood very well for that. She was taken to the round pen where we thought she would take off running but instead she wanted to be with us. She was missing her mama. Still we got a few nice shots for the website. 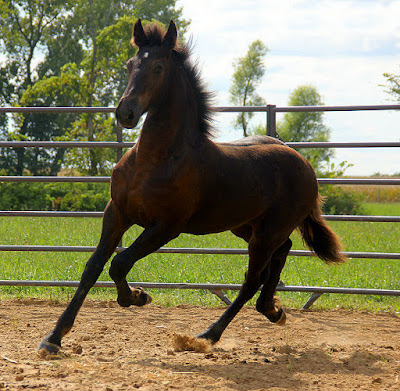 She is HUGE and has such presence it was pretty easy to get a good shot. Just look at that neck! She has an abundance of hair, she has unbelievable movement and towers over the other weanlings. She is for sale for only $5000.00 and this really is a bargain, a quality filly like this usually goes for much more. Everyone that ends up with a Lily foal is a happy customer. 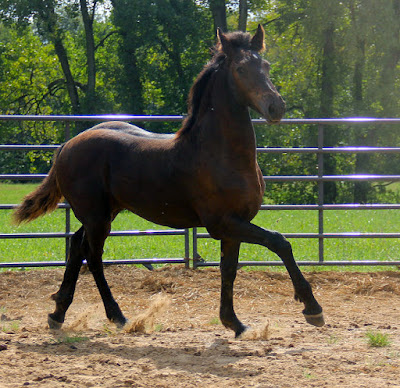 She was put in with the other weanlings so they can show her the ropes on this living without mama thing she is being asked to do.
The weather was so nice that Dakota and her 1 day old filly were taken outside for a couple hours this afternoon. She would run around her mom making Dakota spin trying to keep an eye on her wayward child. 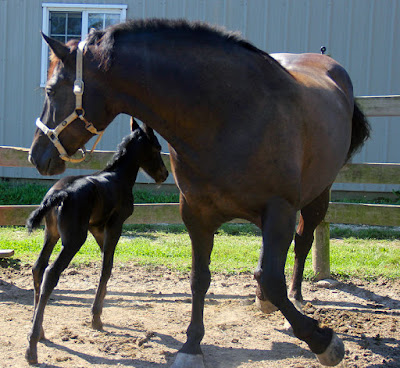 It was cute when she stopped to rest under her mama's tail. 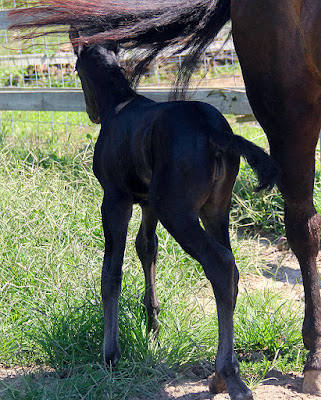 Mark spent most of the afternoon mowing the trails in preparation of the Labor Day rides then scraped the paddock next to Evan's. Ralph and Jamie came this evening to spend some time with Dakota and her 1 day old filly. They are still in awe of this special gift and sent this picture of their visit: 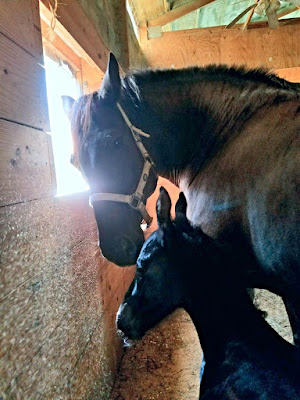 Dakota and her filly are doing wonderful. Jamie has named her Legacy.
Dan brought out his boat and camper for the Labor Day weekend. He and his boys will be spending the night on the boat. Below he is taking Rachel, Dave and Logan for a three hour tour around the lake. Hope they don't get lost. 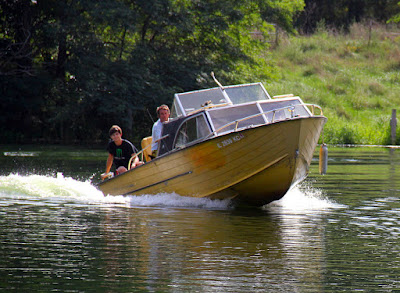 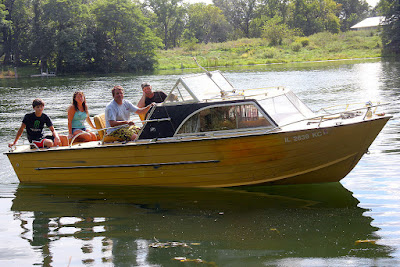 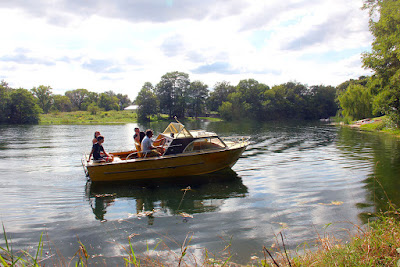 Susan and the girls will be sleeping in the camper. me thinks they might be the smart ones. Dan's camper is really nice, completely self contained. Tomorrow I'll get some pictures of that. This evening Mark and I worked on repairing Evan's paddock. We finished just as it was getting too dark to see so we really did work from dawn to dusk plus. What a great day.
Posted by Judy Sceggel at 8:50 PM