These 2 colts are the luckiest fellows around. They haven't been separated since Prius was 2 weeks old. From the time Prius' mother let him go play with the big boys he and Solomon have been best friends. Not only were they sold to the same loving family they get a deluxe home. Their new family is pictured below. 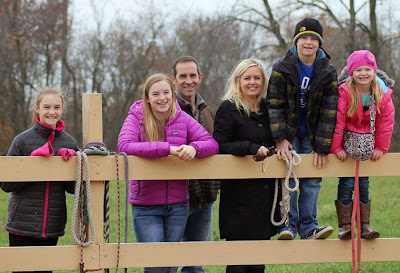 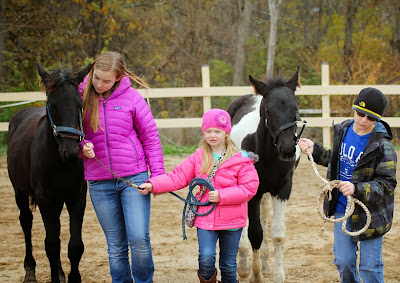 Rhoda and Emily will be delivering them, probably on Wednesday.
We had a very busy day but what else is new. Mark and I worked on setting poles for the new gates going up in the far pasture, then hooked the road grader up to the new tractor. Finished cleaning out the barn garage by moving the old woodburners out of that and into the house garage to make room for the tractor. If anyone would like to burn wood this winter we have a couple woodburners for sale. One is a Vermont Castings Defiant model and the other is an Osborne. Both are older working woodburners both would heat a moderately sized home. The Osborne is $125.00 or best offer, the Vermont is $250.00 or best offer. The Vermont is rusty looking but actually a better stove. Both are fully functional. I'll get pictures later.
This afternoon Amy Koch and I went to Rose Schaer's memorial service. I enjoyed hearing all the stories about Rose. One the way home Sarah called to ask me to stop at a store to pick up a pumpkin pie but there are no stores between the fellowship hall and home so I told her to call Jubilee Cafe and order the pies. She decided on a peanut butter pie and a pumpkin but when I stopped in the waitress told me no one had called in and they had no pumpkin pie and only 1 peanut butter pie left. As we were trying to figure out what other kind of pie the kids at home would like, another waitress comes over and says, " there is a guy on the phone is asking for a pumpkin and peanut butter pie but there is no pumpkin so what should she do?" I got on the phone and told him "there is just one peanut butter pie left, take it or leave it," then a second later "sorry someone just came in and bought the last peanut butter pie." It was David Jacob on the phone and he says, "was her name Judy?" I answer I think her name was Ilene." He was very disappointed and hung up, as I'm getting ready to leave with the peanut butter pie and an apple pie my phone rings. It is Sarah to tell me nevermind about stopping at Jubilee Cafe, they are out of pie so they are going to order pie from Gils and would I go there. Of course I had to confess it was me on the phone with David Jacob and I was bringing home a peanut butter pie and an apple pie. Amy and I stopped at our house first to grab a piece of each before taking it to Sarah, cut into the peanut butter pie to find it is NOT peanut butter but chocolate pie! The joke was on us.