Mark came along to the farm and helped hooked up the trailer, then started on the tree lines with the saw attachment hooked up to the skid steer. Sanna's leg was unwrapped, scrubbed off, then hosed for about 15 minutes. She was let into the field for her leg to dry. She was so glad for the grass she almost forgot about her sore leg. When it came time to put her back she went straight to the mare paddock asking to be put there instead of a stall but back into the newly cleaned stall she went so the medicine and new bandage could be applied.
Rhoda showed up to ride Jenis at the perfect time. She helped put Kenzie into the trailer. It didn't take much she wanted to follow her mom, she just had to figure how to jump the 2 feet up into it.
Mark was left at the farm and I headed to Bridlewood for the fun day.
Wynne and Kenzie were put in the paddock, then the cotton candy supplies taken to the barn for later.
Cathie had the kids divide into different groups and each group was given 10 to 15 minutes at each station. Below are some of the pictures of the day. 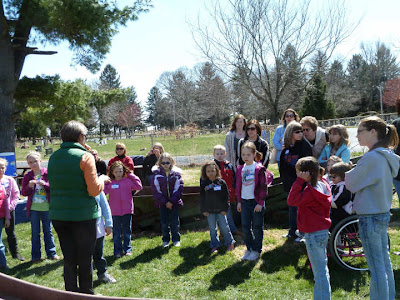 Amy Koch brought in her mini for the grooming session. We were laughing because Mocha is as wide as she is tall. 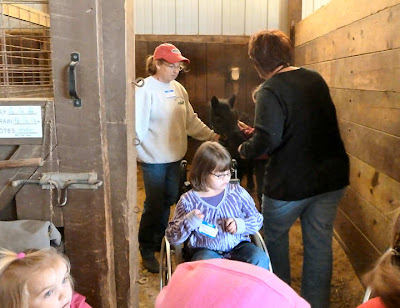 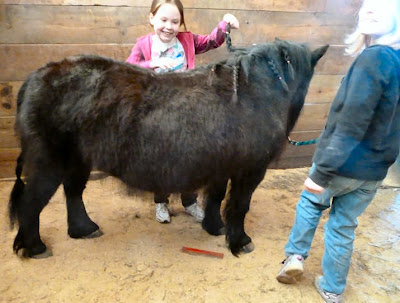 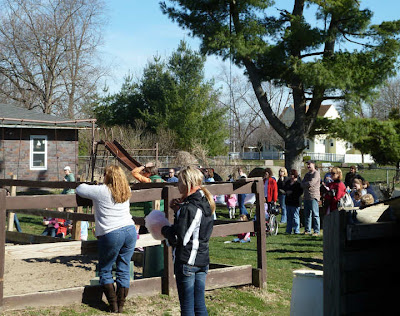 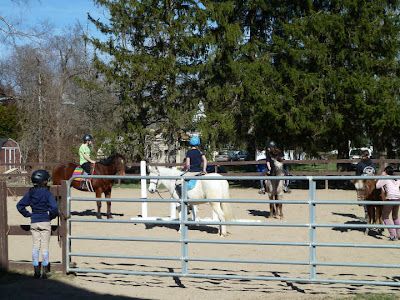 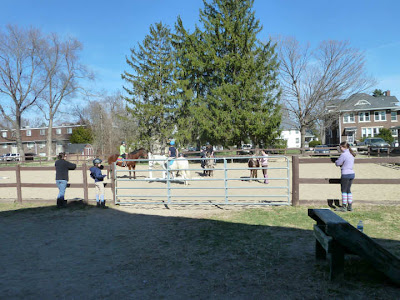 This was a huge success but even with the many many hands it was still a lot of work. After all the riding was finished and the ponies put away it was time for the yummy sweet cotton candy on a stick for each person, then we started bagging cotton candy for the kids to take home with them.
The machine was left in the barn while Wynne and Kenzie were loaded and taken back to the farm. They were so glad to be home. Sanna was given her bute, then brought out and put in an empty paddock that has an automatic waterer, given food and left for the night. I'll be back early tomorrow morning to check on her. As long as the weather holds she is much happier outside plus it is good for her to walk around on her leg.
Mark helped unhook the trailer and we headed home both exhausted. We were invited to Ben and Taunya's for dinner and all the kids were going to be there but called and cancelled, driving to Bloomington and back when both of us are tired isn't very wise. We picked up Chinese for dinner and will have an early night.
Posted by Judy Sceggel at 6:52 PM