Today for the first time in what seems to be months although it is really just weeks the temperature hit 33 degrees. It didn't stay there long, unfortunately the next cold spell is on the way and will be here by morning. Both Mark and I were sure there was church cleaning this morning. We were making arrangements to go when mom called. She was SURE it wasn't this week and sure enough she was right! I'm glad she called before heading in to Peoria.
That gave me a free morning. The stalls were cleaned then the camera taken out for a few pictures from around the farm. None of them were groomed and most had been laying down in the hay. 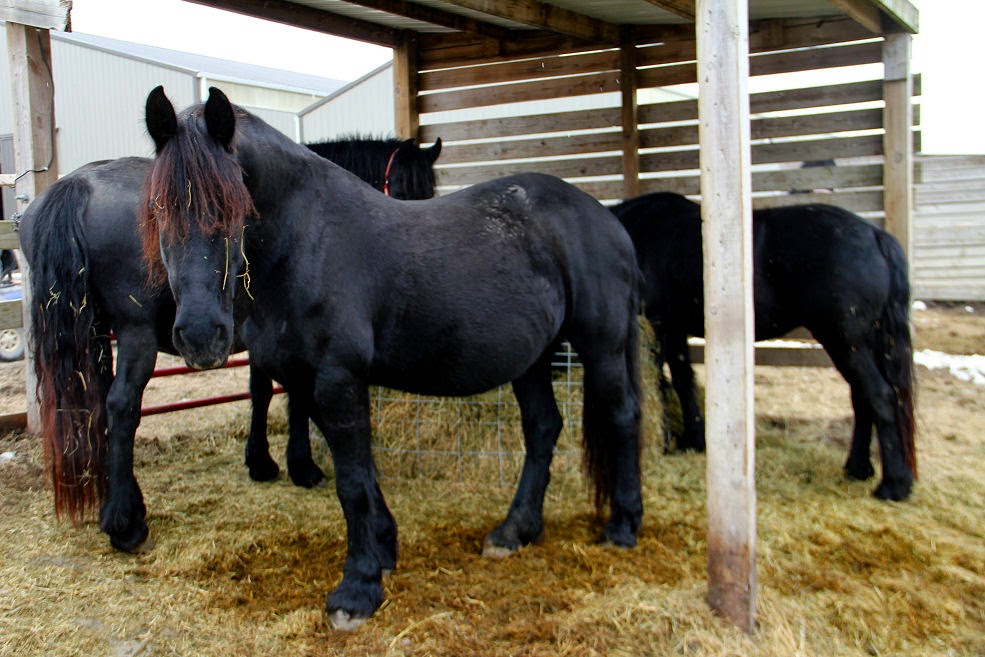 Above is Eliza, she was bred to Evan last year and is due May 19th. We are going for the mega hair on this foal. Below is Ayanna with her face in the hay, Ayanna was also bred to Evan and is due June 22nd. She does not look pregnant to me so I will have Dr. Hoerr check her on Monday when he comes out to sonagram Anna.  Killian is peeking around the corner. 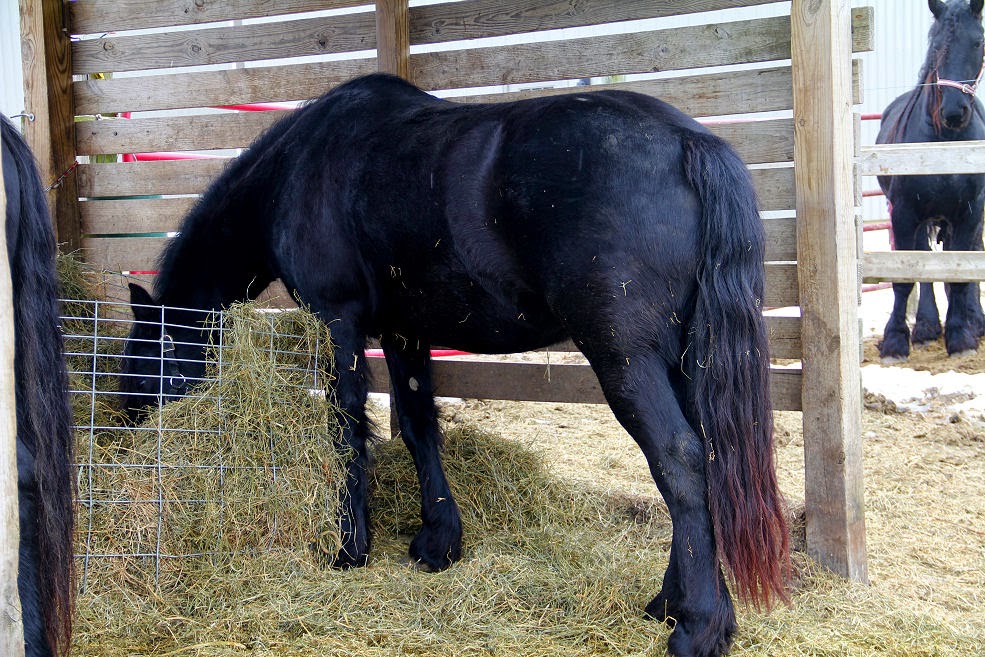 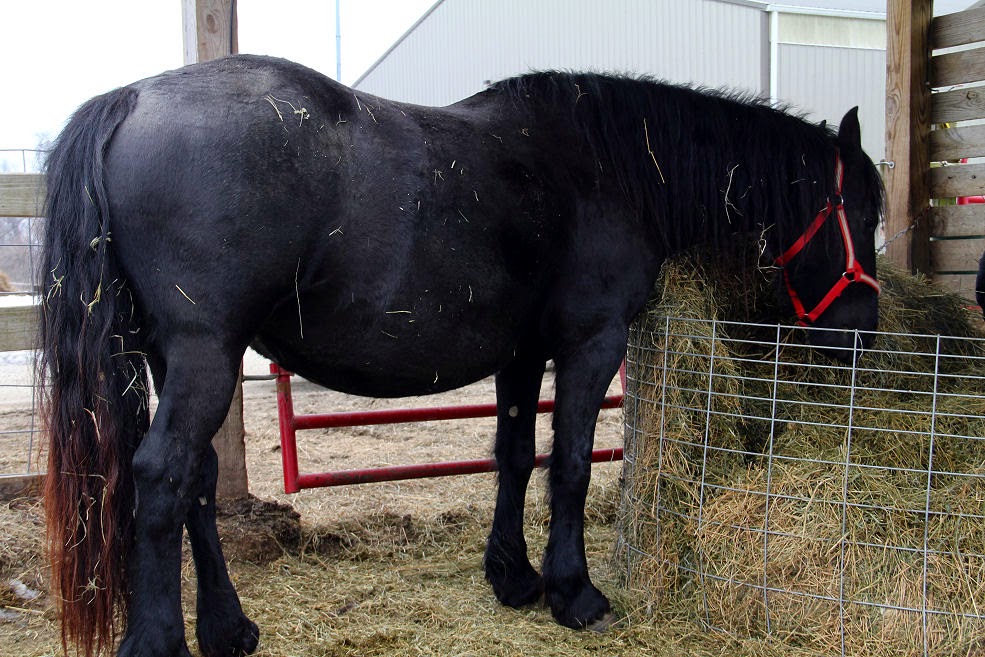 Above is Indy, She was bred to Evan and is due March 11th, she had obviously been laying down and below is Anna's colt by Valiant coming to check out the camera. 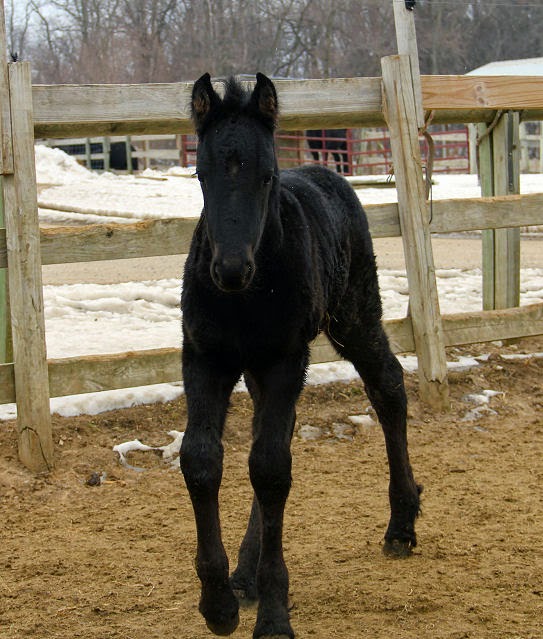 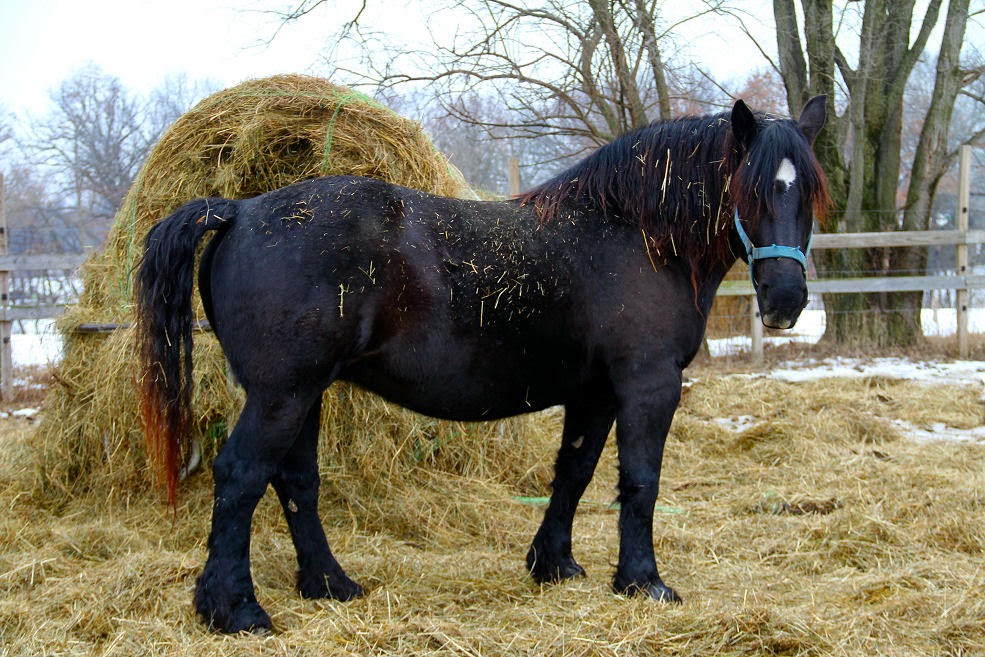 Ribbon had hay all over her side and back. She must have had a good roll after taking her nap. Check out her baby bump in the picture below. Ribbon is due May 13th. 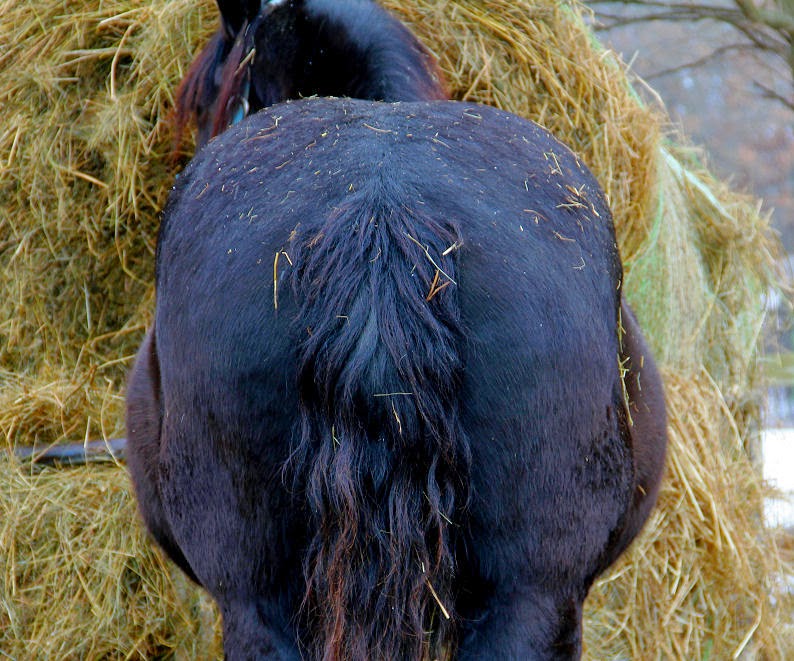 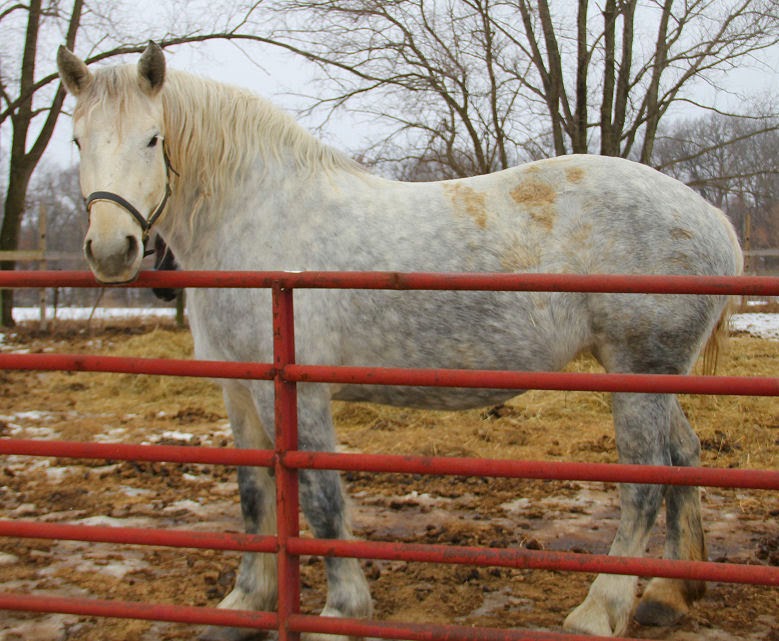 Above is Whitney who was bred to Valiant due July 26th. She sure makes a better door than a window. Behind Whitney is Ribbon and the round bale and she blocks out about ALL of that. Below is Tatiana on the left and Violet on the right. Those white flecks are snow flakes, we were having snow flurries off and on all day. 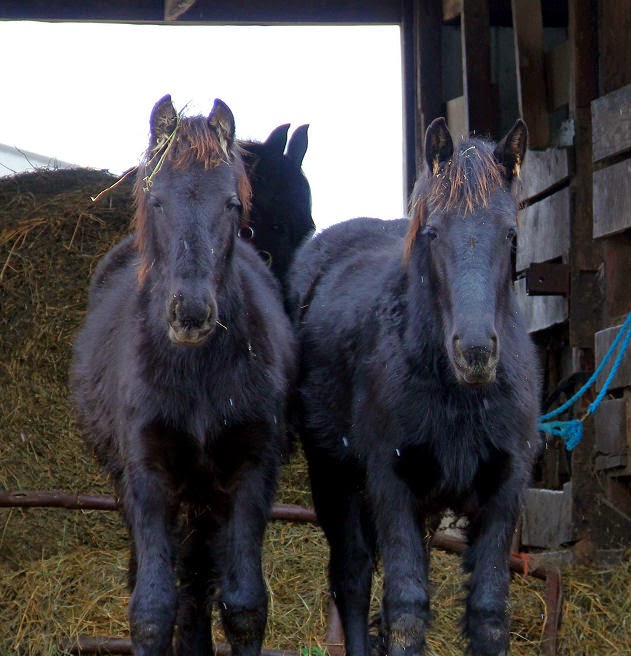 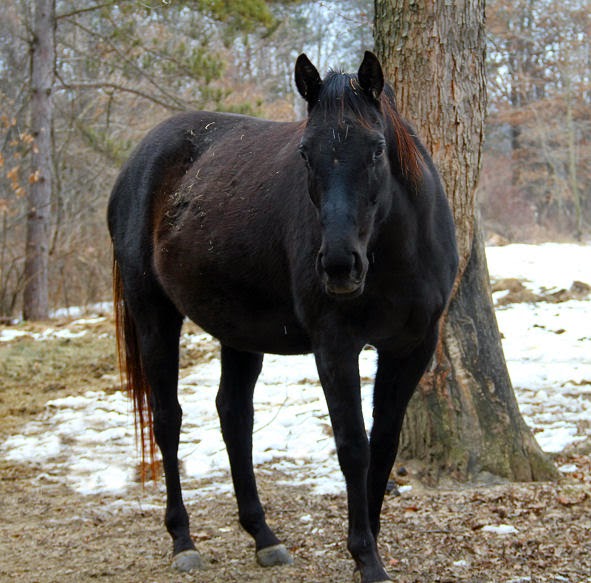 Above is Sheena. Sheena is a Jockey Club registered Thoroughbred mare who was bred to Valiant. She is due April 21st, and is really showing her pregnancy. Below is Soul's colt Ripper. Both of these horses are in the cabin field. 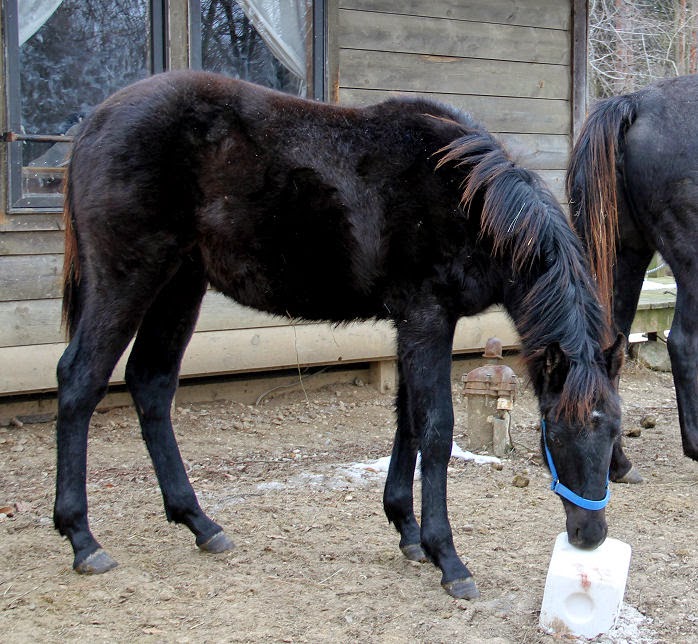 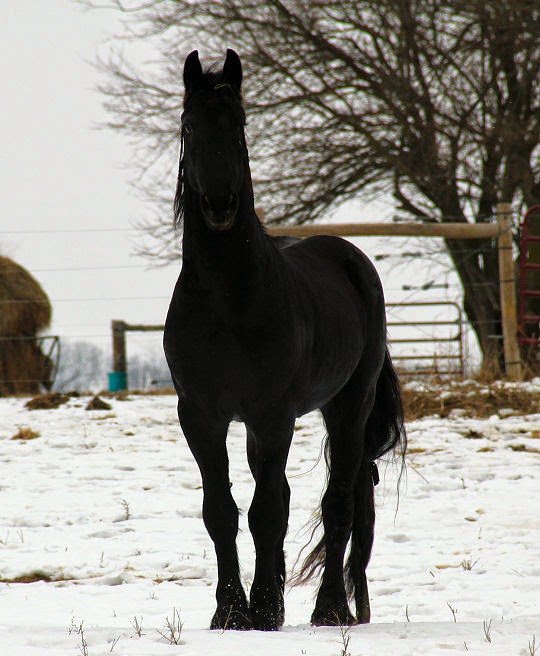 Valiant saw me coming back from the cabin and came galloping up just to check if I was bringing back a mare. He thinks he is the king around here. Below is Evan who would like to be king but isn't. 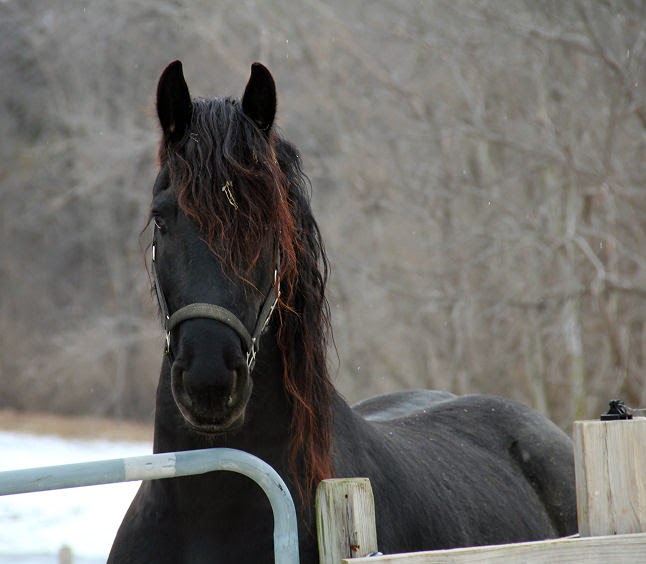 Whitney sure stands out like a sore thumb doesn't she? The only none black horse here right now. We have more colors at Middle Grove.