A Work in Progress

Before the walk the mares were let out of the stalls and Jenis brought in. As today is presidents day we decided to have breakfast at Hanna City's famous little restaurant called The Hog Trough. I say famous because they have won awards for their peanut butter pie. If you ever want to try that delicious treat you can buy the whole pie for only $16.80. We didn't have the pie, we ordered breakfast, that is Rhoda, Sarah and I had breakfast, Karin and Emily just came to keep us company. We were actually having a meeting about the coming up show. I was sent a flyer today to spread the word and am doing my best to let people know this is held in Springfield IL at the IL state fairgrounds on March 6th, 7th, and 8th.
After breakfast Rhoda, Karin and I decided to try Anna and her colt with Jenis. This did not go as well as Friday. Anna is such a good mother she is more concerned with her colt than we would like 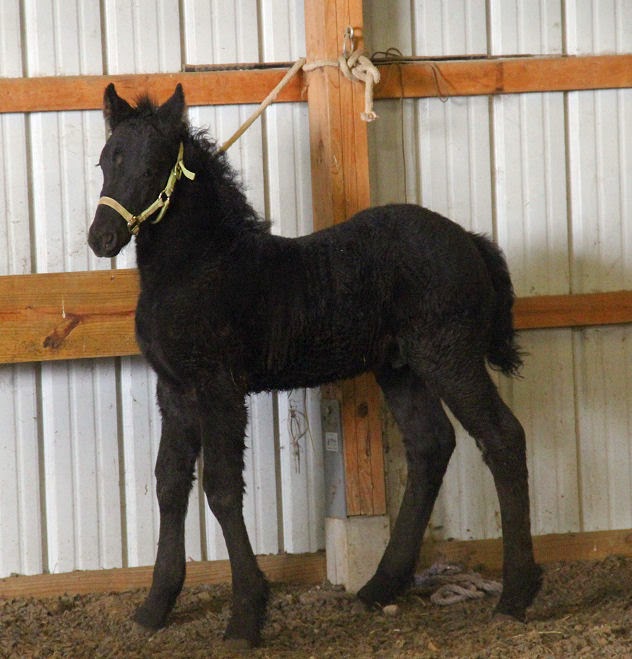 It was a good tying lesson for her colt while Karin worked Anna and Rhoda rode Jenis around. Above he is standing quietly but below he is telling us, "enough already LET ME LOOSE!" He was curious about Jenis and came over as far as the lead rope would let him while she reached down to check him out. 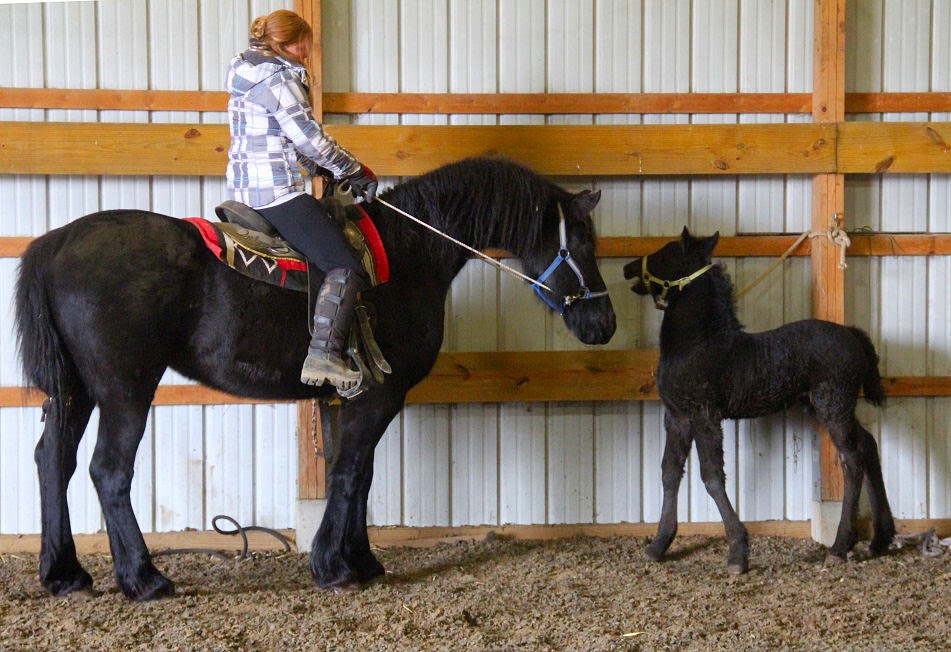 Below Jenis and Anna are walking together pretty quietly but once we took him out of the arena Anna lost her focus on the rider. We are asking her to do something totally against her mother instinct. 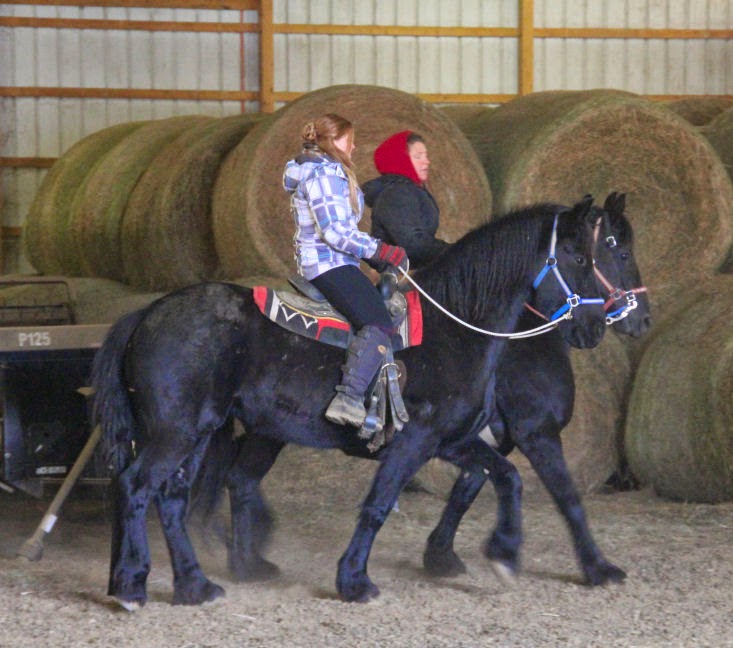 As soon as the horses were put away I drove in to TSC to pick up shots and wormers. They only had 8 of the 5 way shots left so only the horses going to the fair were given them. The rest will have to wait until TSC gets in another batch. These same shots we use to pay $25.00 for have now gone up to $36.00 each.  Jenis was also wormed with Quest Plus. She is just a little thin compared to the other Friesians. A big thanks to Karin for all of her help getting all that done. Work sure goes better with an extra set of hands. Emily took the stock trailer over to Gary Unsicker's to pick up 25 square bales. We needed 20 to take to the fair and bought 5 extra to have on hand for when Star and Indy foal.  We loaded 5 bales on the golf cart and drove them over to the stall barn. The other 20 were left in the trailer. We can move the trailer into the indoor arena if the weather gets bad before the fair.
Mom invited Spark, Rhonda, Mark and me for supper. She made a delicious beef and cabbage soup which was served with 3 different kinds of cheese, crackers and peach pie for dessert. Rhonda showed us some of her pictures from their trip to Florida. They were so beautiful I'm going to share them here. Below is the moon glowing on the Atlantic ocean and the bright dot off to the left is the planet Jupiter. 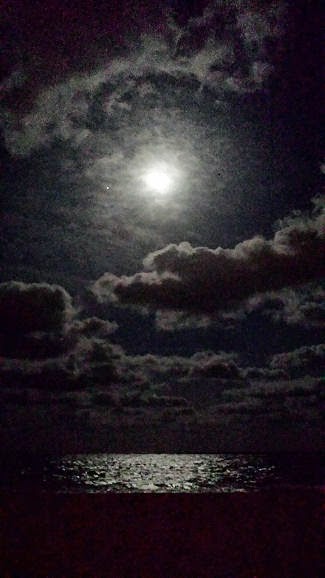 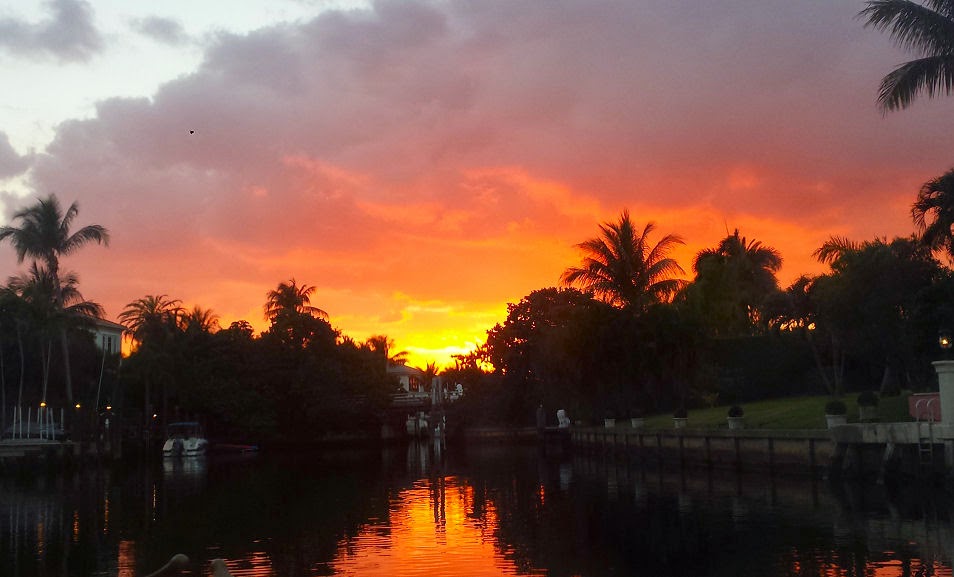 Above is a beautiful sunrise picture and below another picture of the moon covered with clouds, Jupiter can be seen a bit better in this picture. 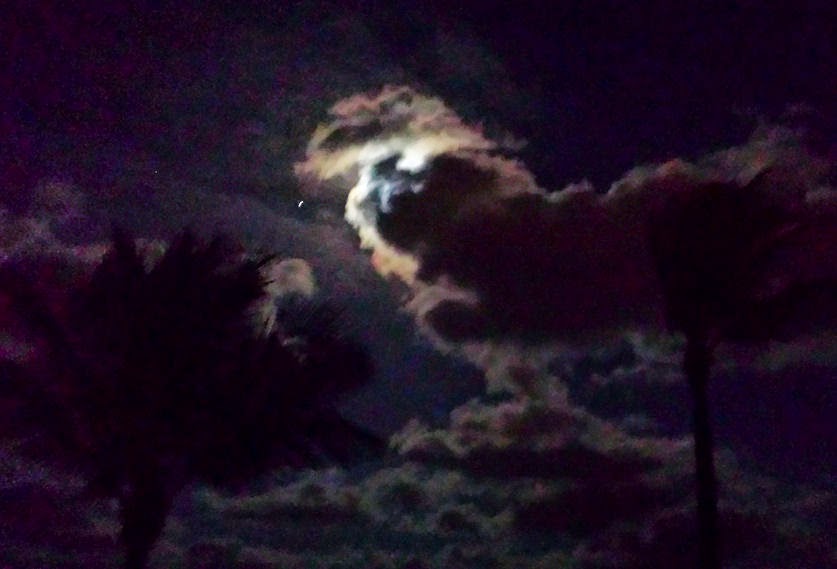 Above and below are sunrise pictures. 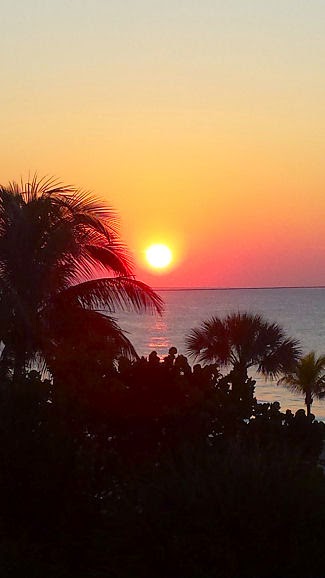 Thanks Rhonda for sharing them. I still need to go out in the cold to bring Indy and Star inside for the night. Emily went to the ICC Bible study with Jessica.
Posted by Judy Sceggel at 7:56 PM