A Cold Day to Work Outside

With the wind chill below zero this morning we cancelled the walk. Diane picked up Emily and I for our usual Thursday Berean work. We were joined by Eva Jean, Diane R, Tiffany, Rachel and Terren.
All the mail today was just 1 day's worth of mail, just Wednesday's mail as Ellen didn't pick up today's. Below Tiffany and Rachel are working on Bibles while Terren is stamping our address on thousands of envelopes. 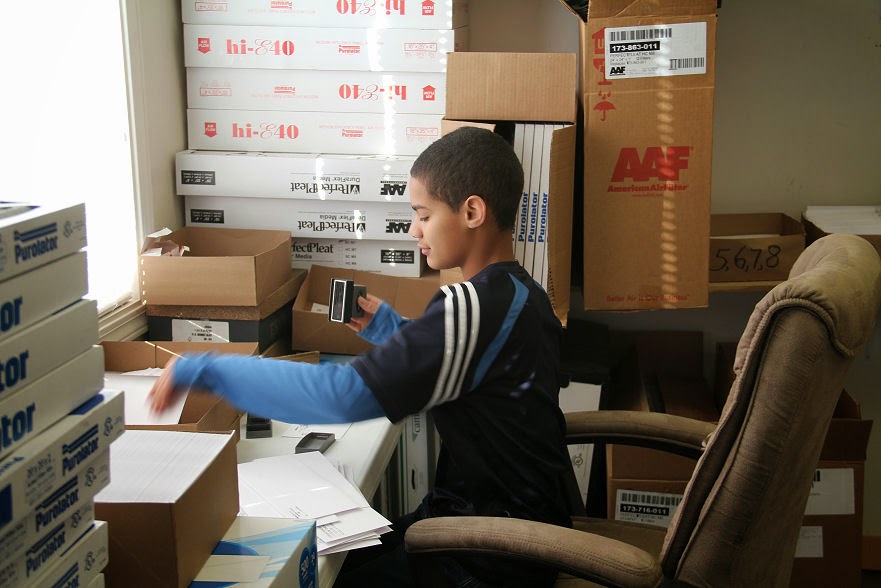 When he got 2 boxes finished Diane put him to work on opening copy paper. Diane kept that copier running none stop today. 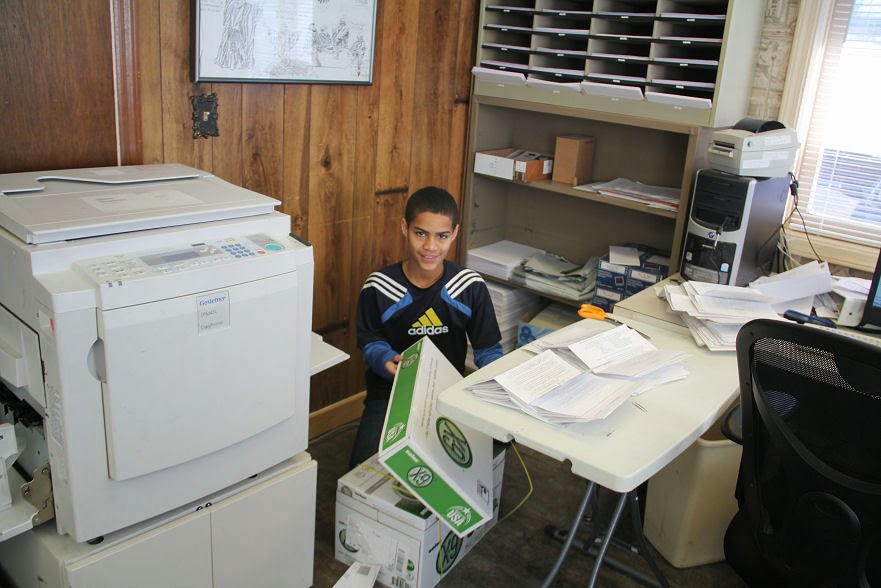 Below Diane R, Diane and Eva Jean are opening mail and reading letters. Emily helped for a while then started entering the studies on the computer. 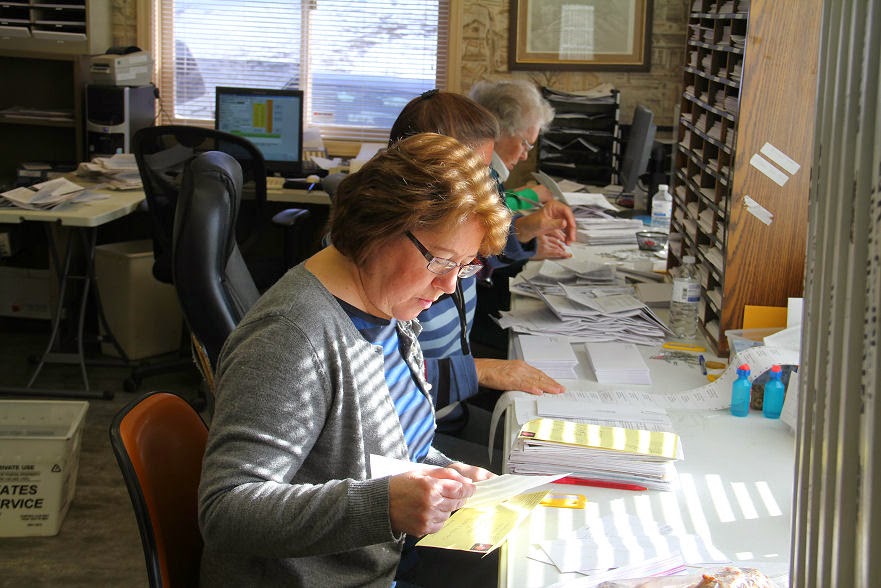 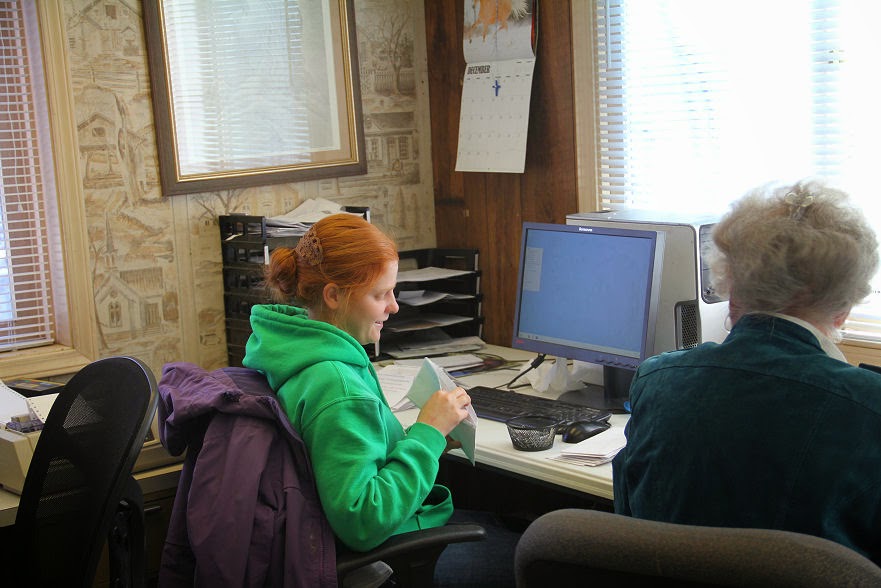 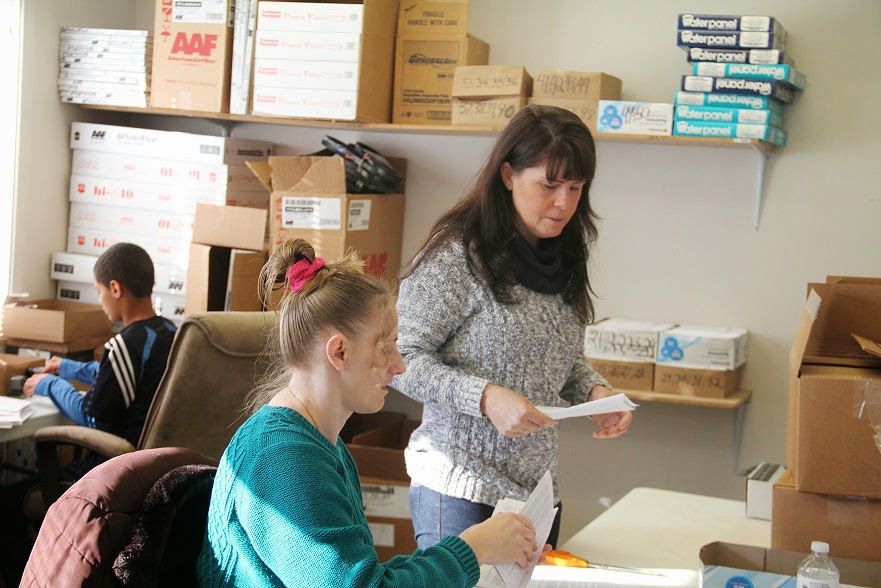 Once the labels are on the envelopes the studies are taken into the conference room to separate into the piles by number. The stuffing of the new studies are also done in that room. 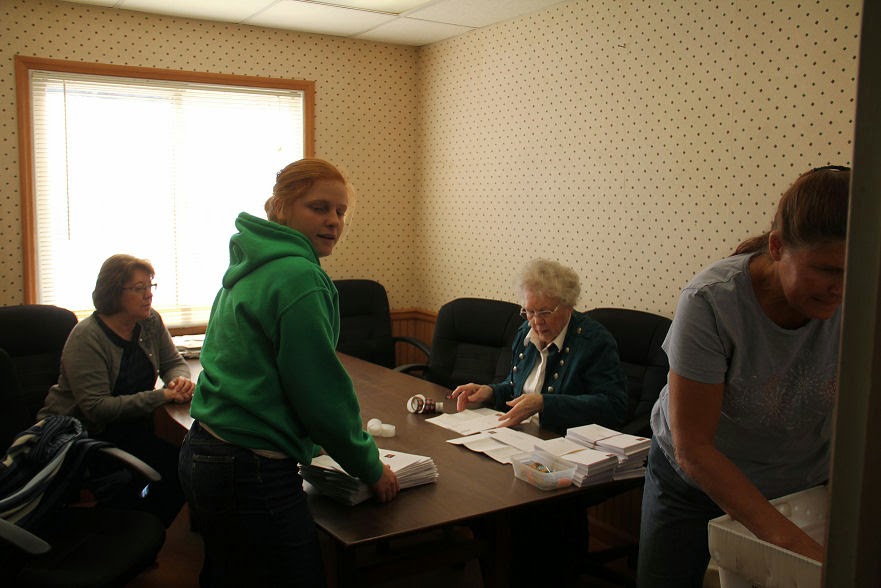 There were 8 of us working and all of us kept busy from 9:00 am to noon. We dropped off the Bibles at the post office and ate lunch at Tyroni's.
By the time I got back to the farm Phil and Tyler were here working on our heat pump and thermostat. The house was a cold 62 degrees inside. At least there were still coals in the wood burner and it didn't take long to get the heat going. Karin arrived to work horses. Jenis was the first mare worked and I walked in just as she was finishing up with a bow. 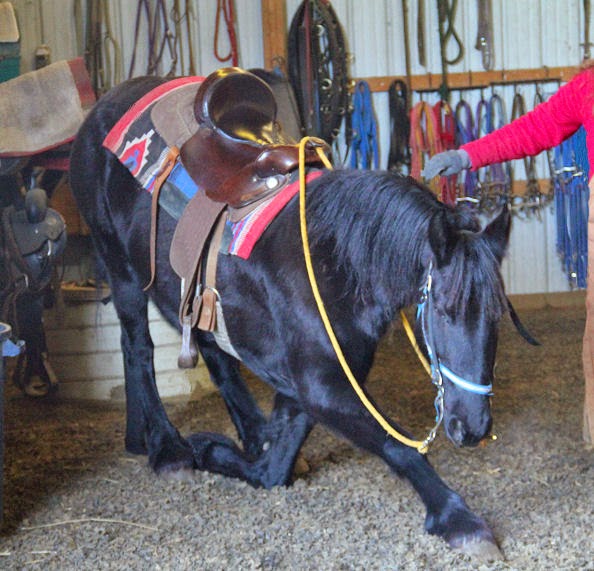 Ayanna was brought in next. This mare will be 5 year old this year and has jaw dropping huge movement. We sure can tell she is a Raven daughter. 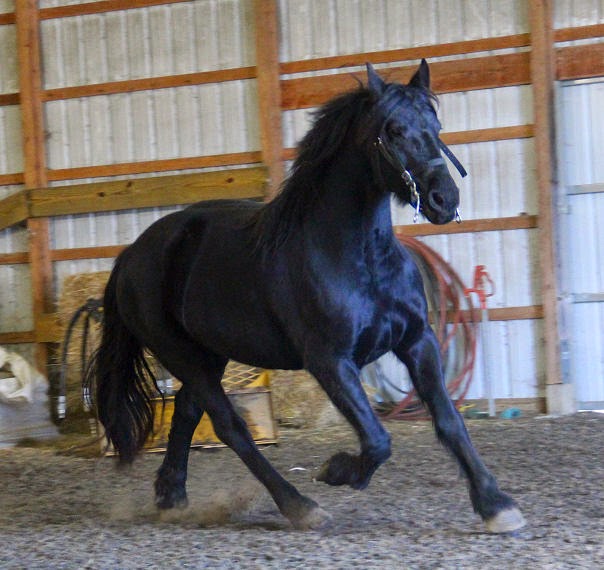 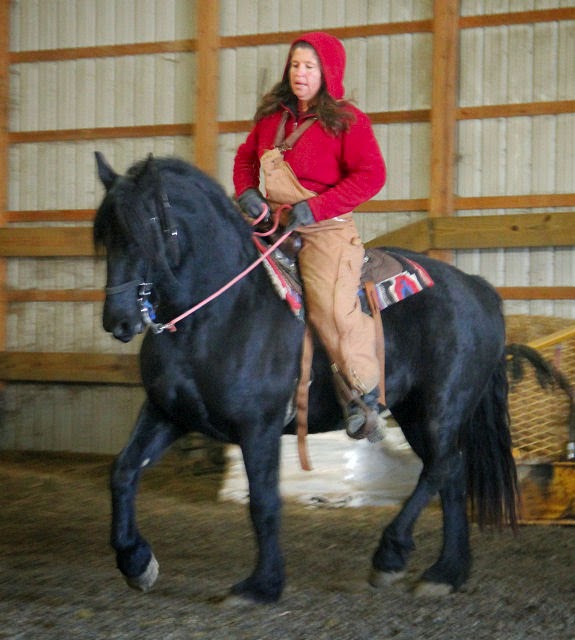 Anna and her colt were brought in next to introduce Anna back into work with another horse in the arena. Anna wasn't happy in the beginning to have Ribbon sharing the arena with her colt but by the time they were finished Anna was accepting her. Below is the colt having a ball galloping around the arena while his mother was working. 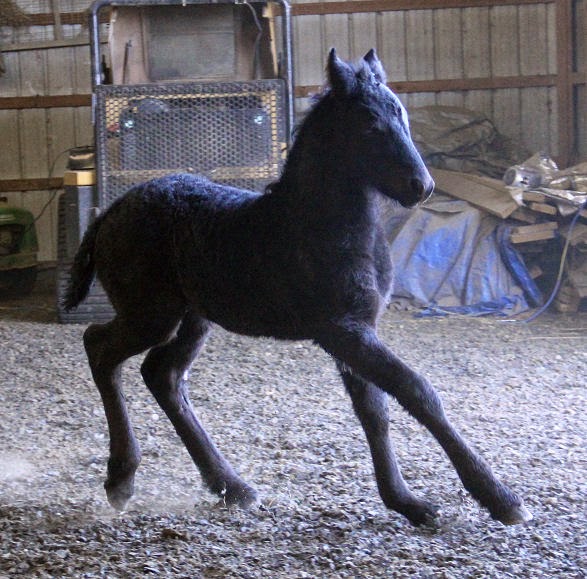 Emily was working Killian in the outdoor arena on his liberty routine. 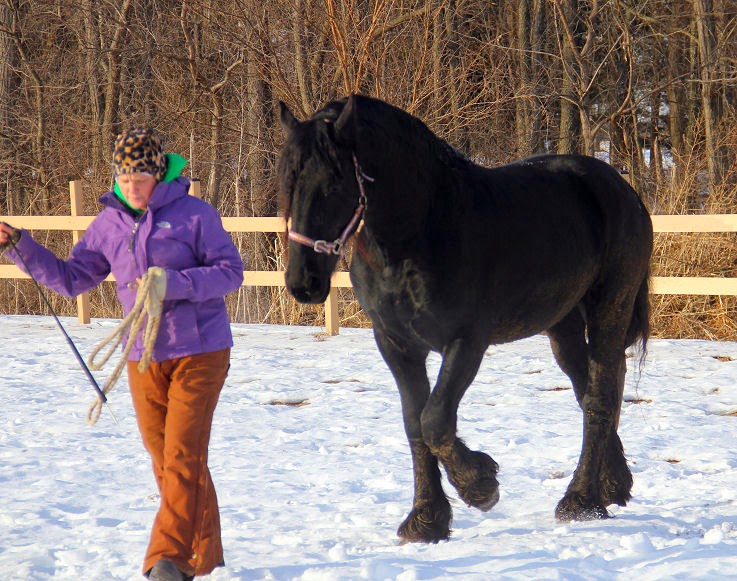 Karin decided we wanted to see how Anna would behave under saddle so Emily saddled her up. It took a while for Anna to pay attention to her rider instead of the colt especially when Karin who was riding Ribbon went any where near the colt. 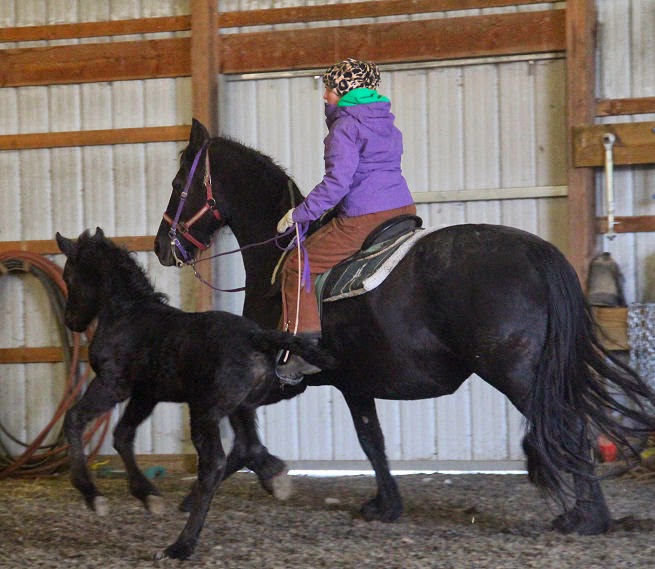 We finally tied the colt up which worked better. We will need to keep working with this for a few weeks. Once Ribbon and Anna were put away Karin brought Whitney in for some work. This mare is HUGE! She is a little herd bound. 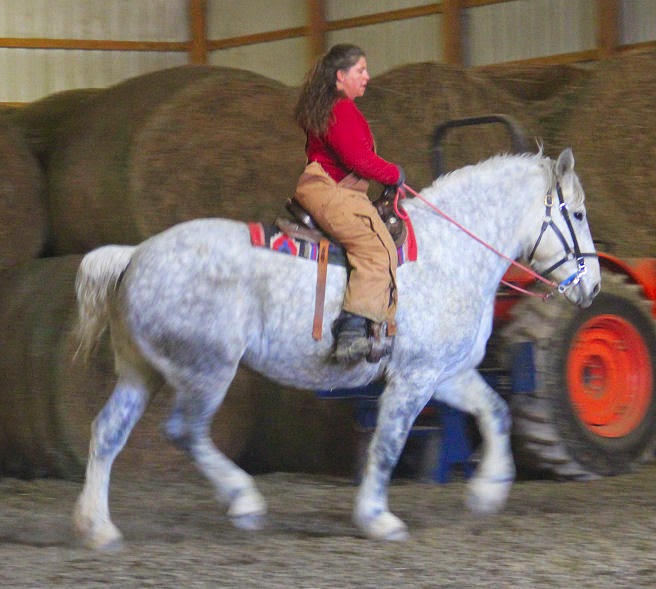 Jesse Stickling arrived and pulled Zalena in. We asked him to take her over to the door to stay out of Whitney's way. When he lead her over toward the door Zalena saw the pedestal and jumped right up on it. 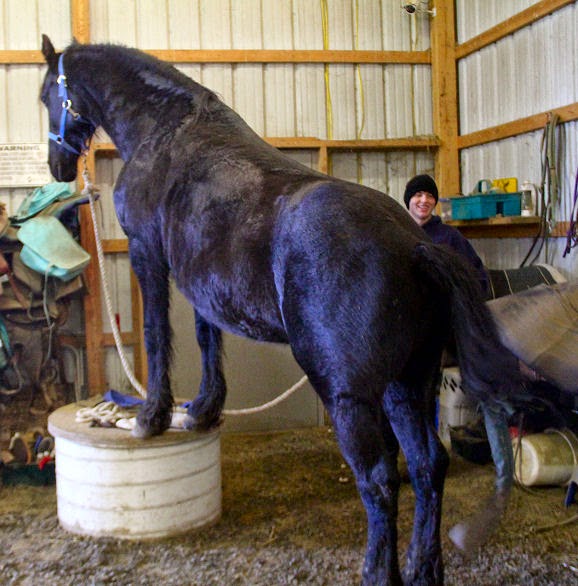 I didn't get to stay to watch Jesse ride Zalena, Mark needed me to meet him in Hanna City. 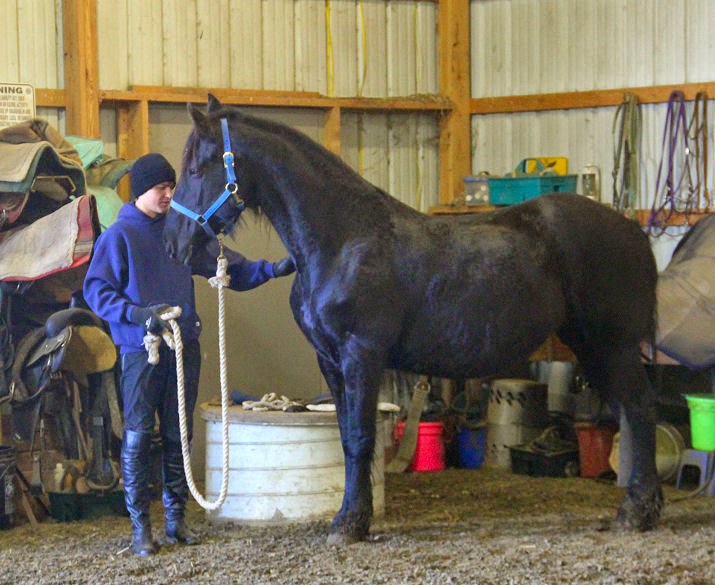