Below is an email that came in, just too good not to share. Can't wait to see pictures or a video of this Raven x Ribbon filly under saddle! 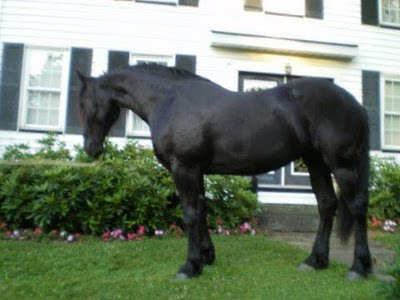 Judy, Judy, Judy!
I just have to tell you! I rode Princess,(26months old), for the 1st time this Sunday! She stood quietly and never moved a foot while I mounted from each side and sat on her. I gave her a good scratching and told her what a good girl she was! Then she noticed Ty with the video camera and she just started walking in his direction. She carried me around like she had been ridden before! She never gave a thought or a care that I was up there AT ALL! I gathered up the reins and guided her around the arena and up onto a wooden box where she posed. She was so confident that I decided to take her straight out to the corral and... (gee, you are going to think I'm fibbing!) we proceeded to ride over a piece of plywood, through water, stepped carefully over an 18 inch pipe, and under a tarp and then out by the road with 55mph traffic flying by! Ty had climbed on top of the horsetrailer to video and she watched him, and heard the trailer noise, but wasn't worried about that either! All of that on her very first ride of about 15 minutes!!!
You HAVE to give me pointers on how to download and post one of these video clips so I can share! We are smiling AGAIN!
Alesia :)

Now after 2 cups of very strong coffee, I'm starting to feel human again. Yesterday was the rest and re-cooperation day and nothing, absolutely no work got done here at the house. The dirty dishes are all sitting in the sink and on the adjacent counters. There is STUFF from the weekend EVERYWHERE and all I wanted to do was SLEEP! The day was spent downloading video from the show, editing video, uploading onto youtube and answering emails. The work at Berean is stacking up, the house is a mess, and there are no clean coffee cups. Funny, I look back at all the work done over the weekend to make the farm look nice and realize there were so many cars, trucks and horse trailers no one could see the place anyway. Rachel Sauder took the 2 pictures below of Sangria, Larry and Paris. These horses were out until the day was PITCH BLACK giving rides on Sunday. 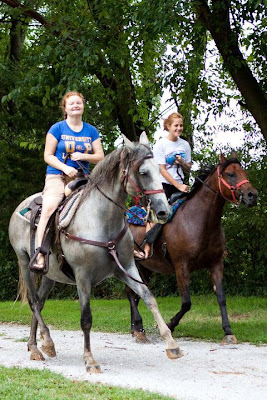 Paris was another of the favorites for the weekend. She really got a work out thrilling many, many riders both young and old. What a great Arabian! 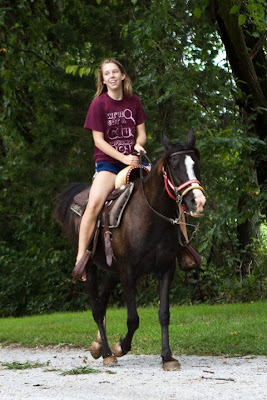 Steven drove out to the farm late yesterday afternoon and reported that the back gate of the first paddock was broken and Larry was in with the herd but he was fine AND somehow Sangria, Knight and Paris were in with the Friesians. They all get along but it is a mystery how they ended up in the middle paddock. More than likely someone went riding, used those 3 horses, and then thought that was where they belonged. Poor Steven instead of a quick trip to the farm to deliver the horse trailer he ended up taking down and carrying out the broken gate and moving horses around.
Posted by Judy Sceggel at 5:28 AM