We had a very cold start to the morning at only 6 degrees. By the time of the walk though the sun was starting to shine and the sky was clear.  The picture below is just as the sun was coming up. 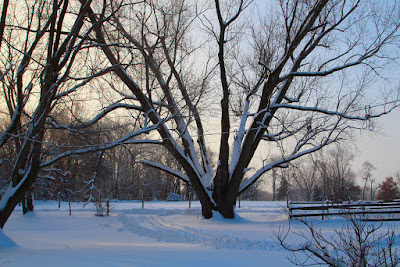 Mom told us the announcer on WBNH was saying it was cloudy with frozen drizzle and we all decided it must have been a recording. On the second round of the walk we were standing talking with Joan and looked toward the west and just like being in a horror story could see a thick fog creeping toward us. The picture below shows that Valiant's shelter is still in the clear but the trees in the back ground are getting covered with the frozen fog. 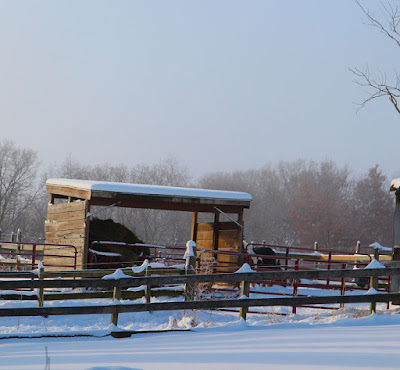 I made arrangements to pick up the Berean mail from TEMCO and on the way in saw some beautiful snow covered trees. One yard was so beautiful it was like a fairy land and the phone was taken  out for the picture below. 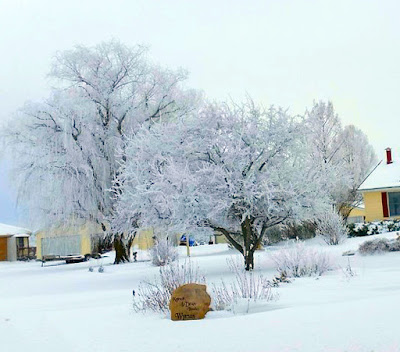 Ellen called to tell me that she would bring the mail out to the car as the TEMCO lot wasn't plowed yet. That went perfectly and from there I went to Kroger in Bartonville to try to pick up mom's prescription. While waiting I purchased the ingredients to make a double batch of Yaki Sobi and started that for the Berean meal as soon as I got home.  At 1:00 pm I met Vikki and her husband to pick up the missing saddle pads. Now those saddle pads must have been a male and female as when I got there they had multiplied big time. There was now a big pile of them. Vikki cleaned out her tack room. 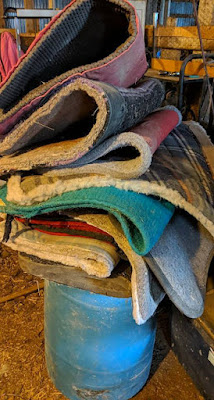 A big thank you to Vikki, we will be glad to put them in use.  With over a foot of snow on the roof each time a big chunk would slide off Emma was sure we were getting attacked and would jump up and bark. We are still waiting for the snow in the picture below to finish sliding off. 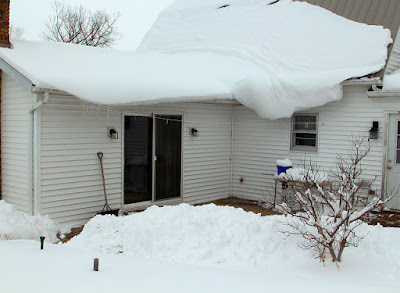 It was interesting to see the folds in the snow on the roof. 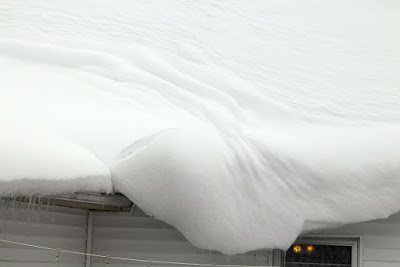 What was also interesting is the icicles that formed on the end of the pile. As the pile curved in toward the house some of those icicles ended up pointing horizontal. 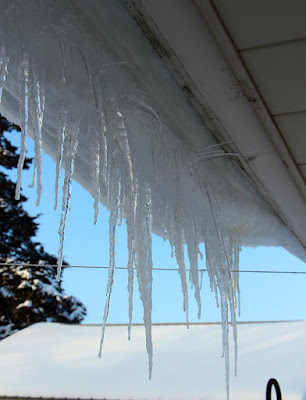 Other icicles are so big and thick they stretch from the table to the ground. Emma is busy tasting the snow in the picture below. The snow on the table is not from the roof, that is still from the storm. The rug that had been moved to the table formed some pretty thick large icicles. 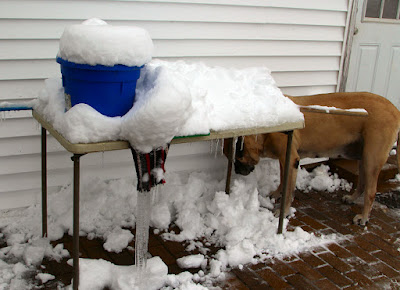 Joan drove in to Hanna City to pick up bags of salt for the drives, spreading it on the entrance, the hillsides and at mom's place. The rec room wood burner was kept burning all day.
Posted by Judy Sceggel at 7:52 PM