Today this January weather was just beautiful. Sunny and the temps in the 50s perfect for moving bales and working outside.  I was able to put 2 new bales in the middle paddock. Worked with 6 of the weanlings, putting halters on and off, leading them, brushing them and general handling.  All did very well. Mike took Mika to Sandridge state forest for a trail ride.  Emily and Mitchel Cooksey met him there and the group that rode had a ball. 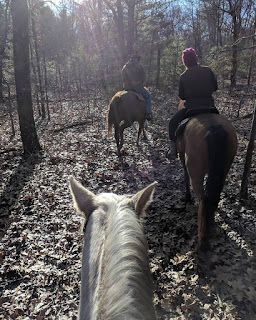 Mark's tractor got delivered yesterday and today Mark let some of us around here learn how to drive it. Joan brought Mackenson and Faith. Mackenson could drive it but each time Faith put it in gear to go it would die. Turns out she just doesn't weigh enough and the tractor won't run for lightweights.  When Braelyn, Taegan and Kensley came we thought Braelyn may be able to run it but she too was too light. It would run if both Braelyn and Taegan were on the seat. 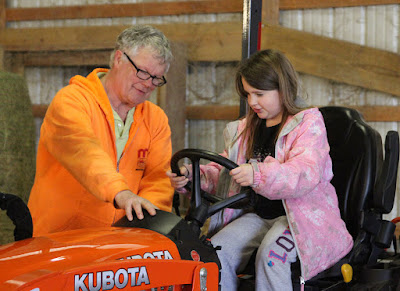 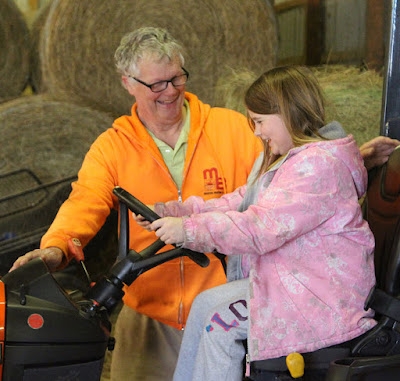 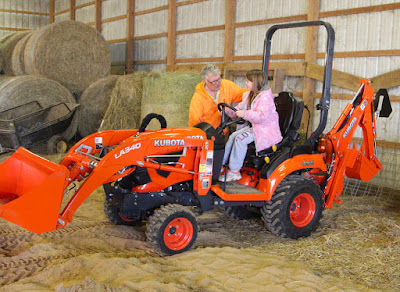 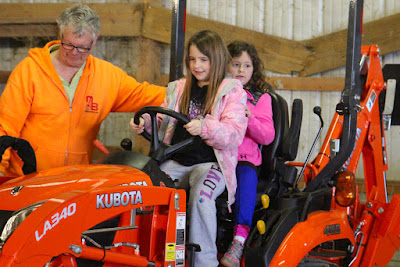 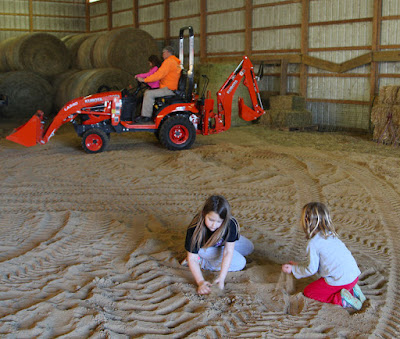 The other girls played in the sand until it was there turn to drive.  Below is a short video of grandpa Mark teaching them to drive.
Joan brought mom's Kubota over a bit later to switch it out with Mark's other Kubota. She was working on some huge logs and needed something a little stronger. 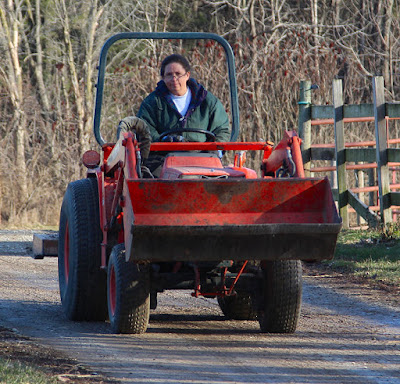 Below she is taking the bigger tractor over to Diane's where she was working on some huge logs. 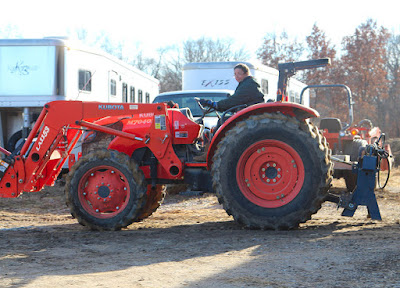 Around 2:30 our new mare arrived. She is a registered purebred Gypsy Vanner. She was born May 5th, 2016 and will be bred to Evan this spring.  Her registered name is RG Irish Surprise but they have been calling her Ira and we will continue to call her that. 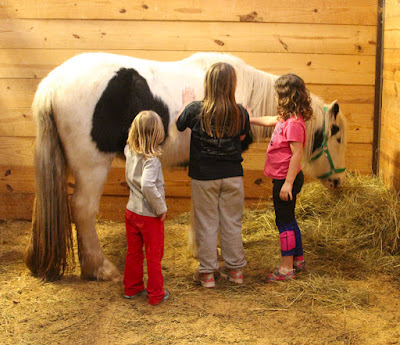 She has the double sided mane, long thick tail that drags on the ground and has very hairy legs. I wanted to check out her movement and decided to take her out to the round pen.  Taegan and Kensley were thrilled to help by asking her to move. 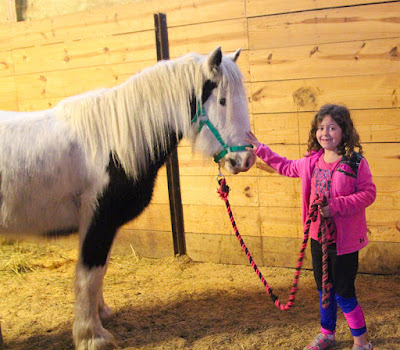 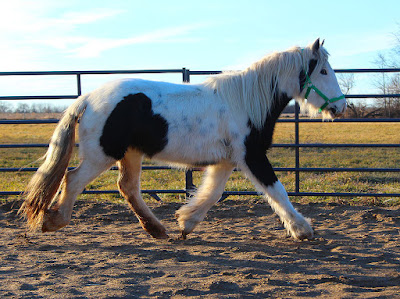 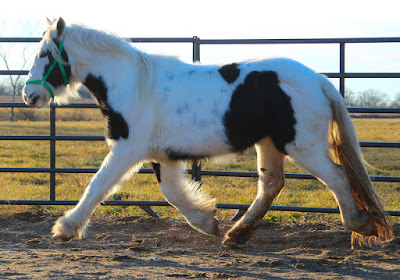 Ira has surprisingly big open movement for a Gypsy.  This will be a wonderful cross with Evan.  If interested in more pictures of her click HERE.
Rhonda had a bunch of her grand children over. Earlier we saw Noel giving 4 wheeler rides and when we were playing with Ira Rhonda came by with a couple more. 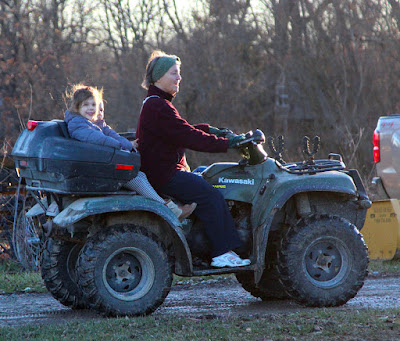 Ira was put in the paddock next to Evan. It has the least amount of mud in it as we only had 2 weanlings there until this morning. 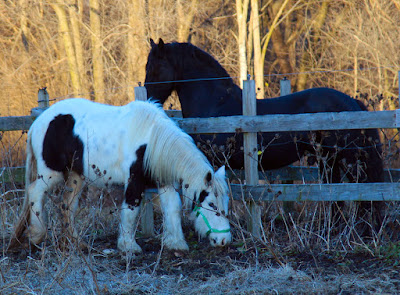 Braelyn drove the golf cart today then went in for something to eat. That gave Taegan and Kensley time for each of them to drive too. Hard to believe we were driving around in the golf cart Jan 5th and none of us were wearing coats. 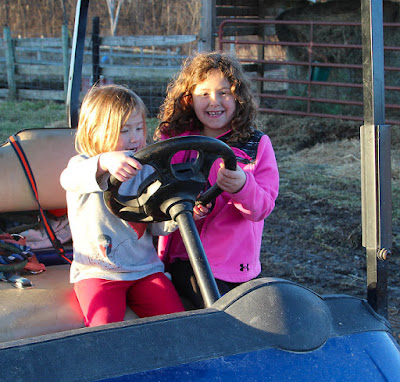 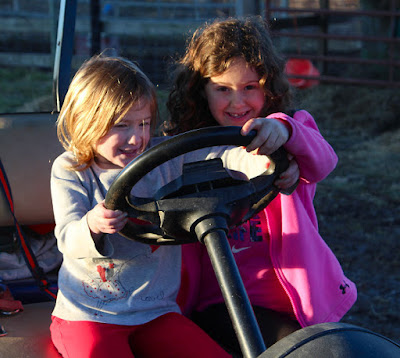 Karin came home today from Florida and picked up Studly. He was so glad to see her.  Anna and Phil were finishing cleaning out their East Peoria home and are now ready to put it on the market. Anna picked up the girls when they finished.  Rhoda and Lee brought Iris over for a visit as they can't come tomorrow. 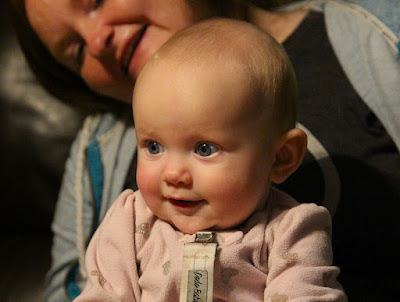 They spent this beautiful day hiking.  We went over to mom's to play games with her. Sarah and Nolan also showed up as they were in the neighborhood.  We had a fun evening and a very good day.
Posted by Judy Sceggel at 9:07 PM