Right after breakfast actually around 7:15 am as soon as it was light enough to see Mark went out to dig out. Peoria Journal Star reported that Hanna City got 13.5 inches of snow and we really were buried. The picture below is on our patio after finishing one more time shoveling the patio I rested the snow shovel on the bank. It is now so high we can't see our drive. 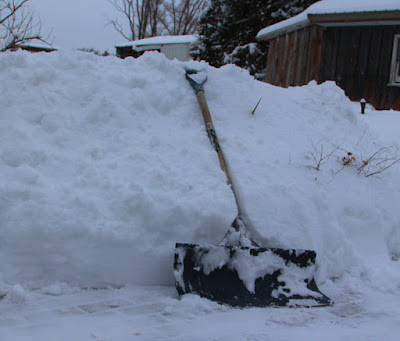 Before Mark went out to plow he checked the church temperature on line and realized the boiler had not fired and the sanctuary was only reading 50 degrees. He made some calls to get someone to go over and manually start it then headed out to plow. I snapped the next couple pictures of the deep snow before heading over to mom's to start clearing her drive and sidewalks. 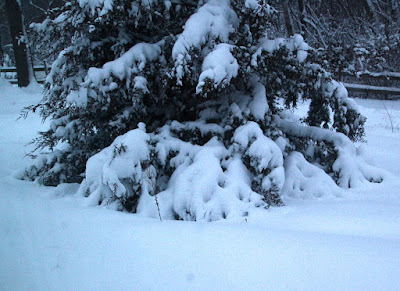 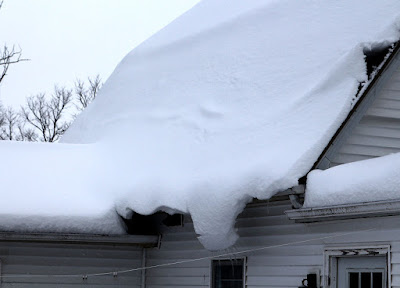 Emma was so funny, trying to make her way around in the deep snow. 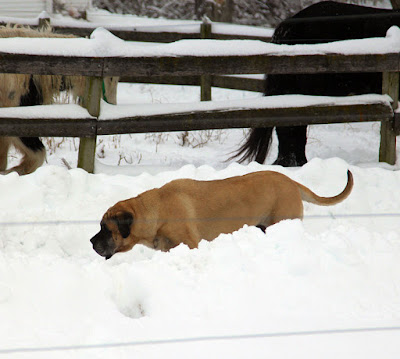 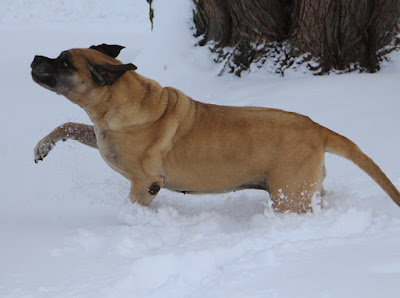 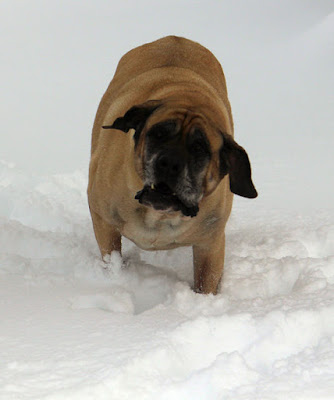 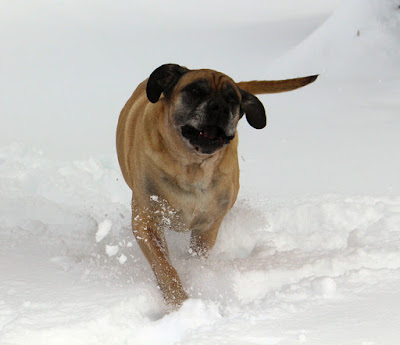 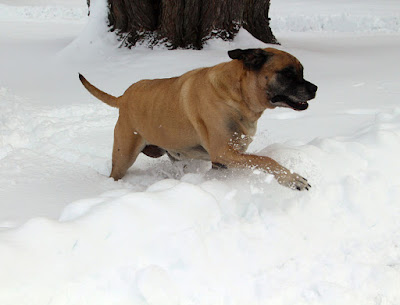 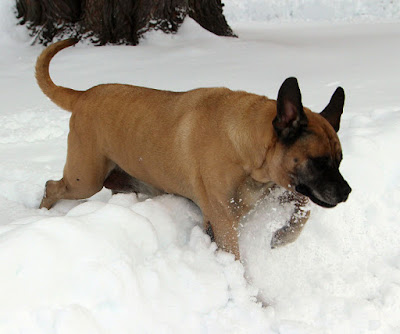 It isn't often we see Emma doing more than walking around. She was having to prance over some of the drifts. As I was finishing up mom's we got word that church was cancelled. They were not able to get the boiler running and the roads out here are really bad. We all headed over to Joan's house to listen to Bluffton's service on-line. 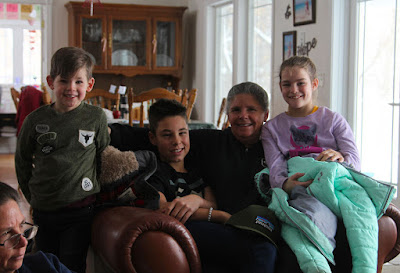 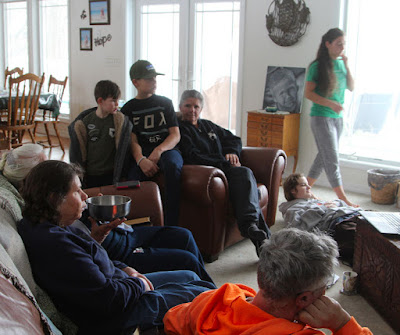 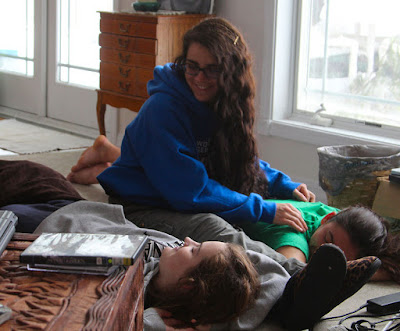 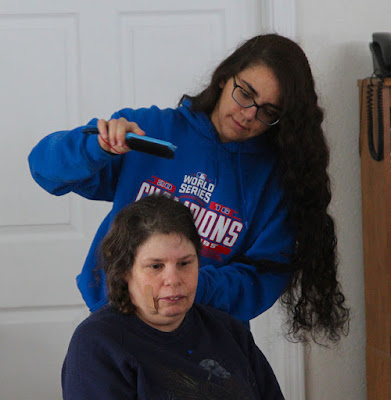 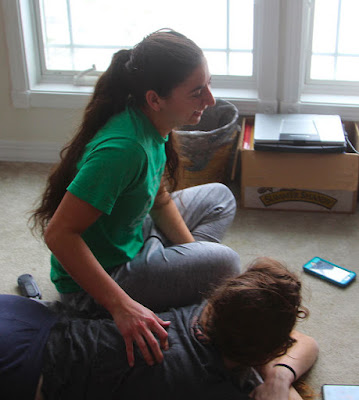 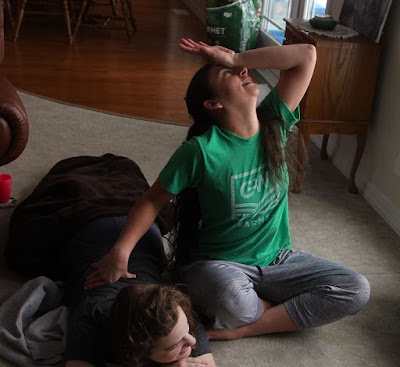 After the service mom heated up her home baked cinnamon rolls for 'church' lunch and Sarah kicked in some of her special fudge. 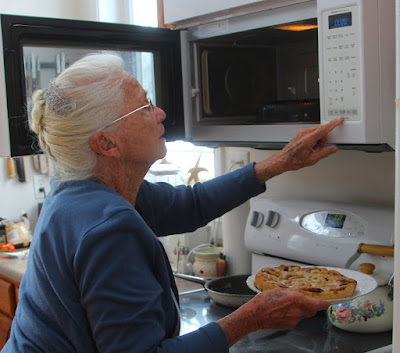 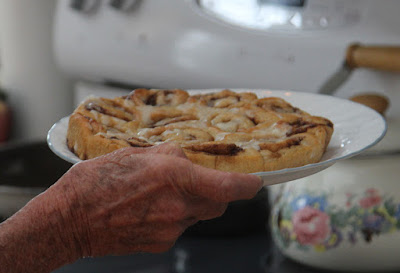 Diane's grandchildren went out to play on the tramp while waiting for Mike to come with the truck. He and Diane took these three out to Middle Grove to go riding. 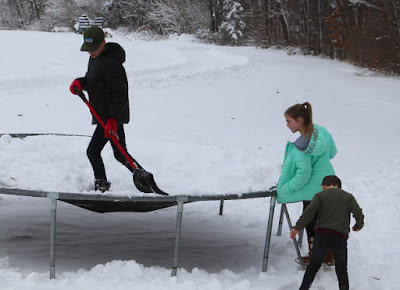 Tate picked Sangria as his mount. He loves riding that mare.  Diane took quite a few pictures and I thought I emailed them to myself but only the two below came through. 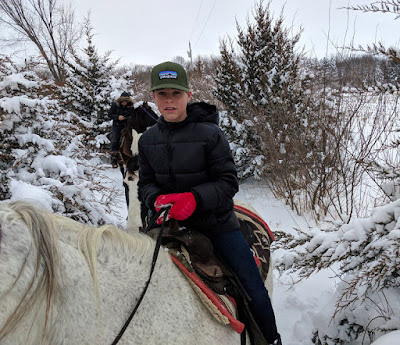 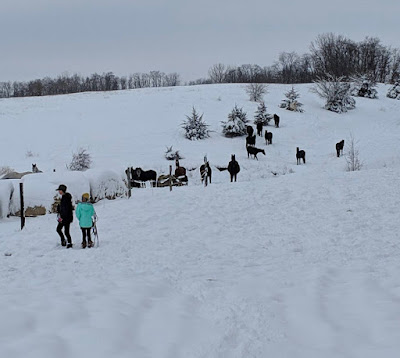 On their way to Middle Grove 2 of the saddle pads blew out of theback of the truck and ended up on Hanna City Glasford Road. It wasn't discovered until they got to the horses and went to tack up. Meanwhile Rhoda AND Sarah saw this post on the Hanna City Happenings Facebook page: Saddle pad Sunday 😁 Found on Hanna city/Glasford blk top today
They are looking for their owner 🤗 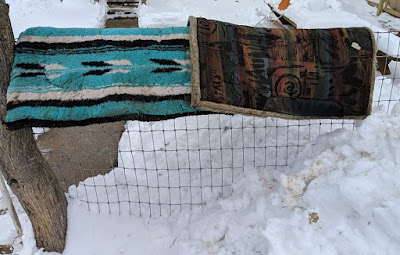 Both girls tagged me, I contacted the lady who found them and it just happened to be a lady we know well. She is going to drop them off at Ruth's house tomorrow.
Joan took the small Kubota and plowed the dam road going over to Rachel's house then took the tractor over to her house and piled up a huge mound of snow to build a snow igloo. Her children will be working on that for at least a couple days.
Valiant and Galena needed a new round bale so they were turned out into the field. I expected them to run and have fun and had the camera with me but they didn't do much at all. Galena tried pawing for the grass under the snow and when she couldn't get deep enough gave up and went back into the paddock. 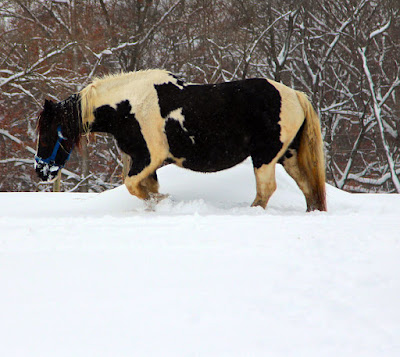 Valiant ran over to squeal at Jenis and Ira in the breeding shed paddock then ran back to Galena in the paddock. 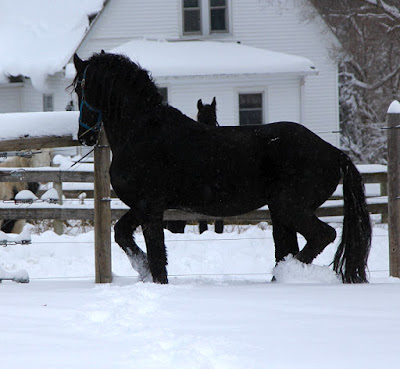 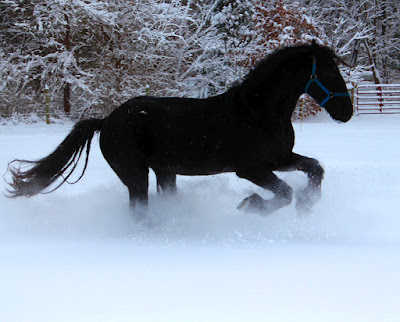 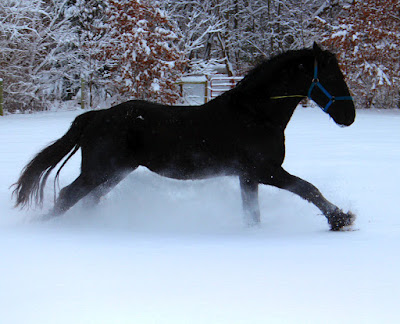 We got the bale moved without any problem then headed over to mom's to play games. Joan brought Nancy over to play too but got stuck in mom's drive. Diane and I tried to push her out but it was just to slippery. We needed Mark to bring the big tractor over and even then it wasn't easy. Sarah R, Diane, Joan, mom and I played until Joan needed to leave to take Nancy home then the 4 of us finished the game.  We all had to walk back to our respective houses as none of us took the chance trying to drive over to mom's.  Sarah sent a notice that the last puppy is now sold.  They were marked sold on the website. We are going to miss playing with them. They really are adorable and give congratulations to the new owners. They will be well pleased. 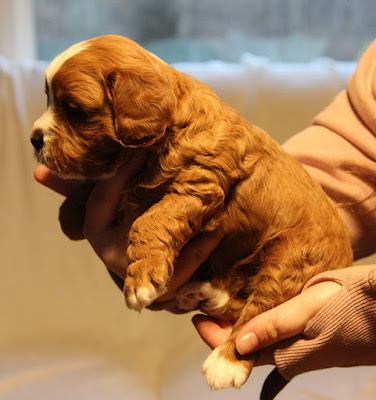 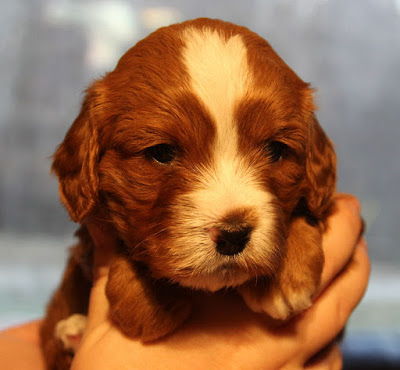 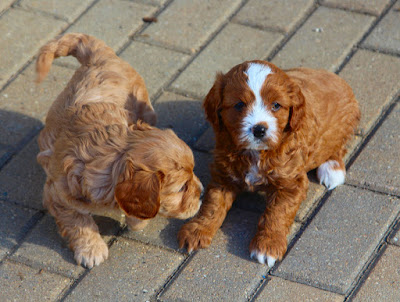 Sure hope they decide to have another litter so we can all get our puppy fix.