It was really cold on the walk today even though it was above freezing by 2 degrees meaning we had 34 degrees with sustained winds of over 20 miles and hour with gusting in the 30s.  We only got one round in before quitting.  Half way through March and we still need winter coats, hats and gloves.  I met Stephanie at the Fellowship Hall this morning and took Israel and Elisabet for the day. We went shopping at the Dollar General in Hanna City and had a ball. The winter hats, gloves and scarves were marked 70% off so Hats and gloves were just 30 cents each which meant it was time to stock up. These are the cheap knit hats and gloves but they still come in handy.  Elisabet and Israel were told they could pick out 1 toy each and that took at least a half an hour to choose from the one toy aisle. Israel picked hockey sticks and Elisabet chose a fishing pole with fish that light up.  It really was too cold to play outside so they had fun playing with their new toys indoors. 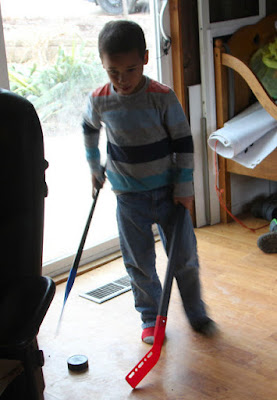 Below they are having a race. Israel remarked that he was riding Galena and was sure to win. 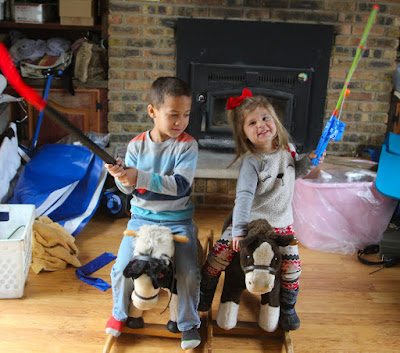 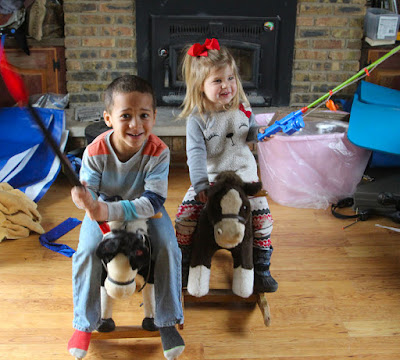 As Galena is the vaulting horse, he had to do some vaulting tricks on her. Karin would be proud. 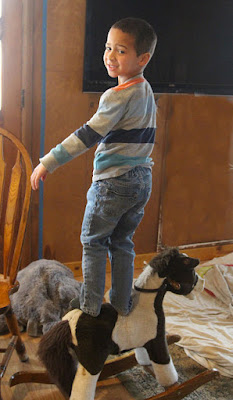 I met Stephanie back at the Fellowship Hall just after 4:00 pm to give them back to her. They and grandma had fun today.  As soon as I got home I took some goodies up to the apartment for the guests coming in this evening and did the final clean of the floors.  I also turned up the heat to 72 degrees and left all the lights on. They are coming from Virginia and won't arrive until 9:30 pm or later. They are bringing a horse lover, their 8 year old daughter with them, along with their other 2 children and their 2 dogs. It is nice the apartment is comfortable and roomy enough for families.
All udders were checked and only Lola's is big. Her's did the same thing last year but she did not go early. She is due April 12th. Anna was moved today in the far paddock with the 3 weanlings. She is due April 2nd and I want her close to the barn.  We are suppose to have sunshine tomorrow with temps in the low 40s so maybe we can get some updated pictures of these pregnant mares and growing weanlings for the website.
Posted by Judy Sceggel at 8:29 PM