We had a good walk this morning although mom overslept and just joined us for the second round.  That time change strikes again!  After the walk the apartment was cleaned and made ready for the guests coming in tonight. Of course the barn also had to be cleaned and swept.  The weanling paddock needed another bale. They are given their grain in the front while I slip the new bale into the shelter and it works perfectly. The other paddocks all have enough hay.  The old truck and the Exiss trailer were pulled out to haul 3 mares to Middle Grove. That old 2003 truck made it all the way there AND back to the fairgrounds in Springfield hauling 4 big horses without stopping for gas, a good 180 miles. As it was pretty empty I wanted to take that truck and fill it up.  I don't like leaving the vehicles without gas. The time on the truck clock was finally correct. Amazing that I only had to wait 6 months for that to happen. I don't drive the truck much and can't remember how to change the time on it so for the last 6 months had to remember to subtract an hour. Karin agreed to meet me after work today to haul Jenis, Ayanna and Rosalie out. They were thrilled to be out and took off at a gallop up the hill to find the herd. 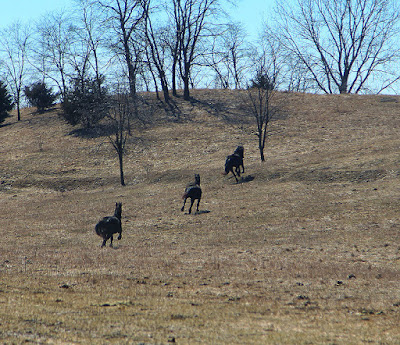 We planned on bringing back Hadassah, Marika and Lola, the next three due except when we got there it was pretty obvious that Hadassah was not pregnant. She is in excellent shape coming through the winter well but not pregnant. We decided to leave her and bring her back in late April or early May to be bred. 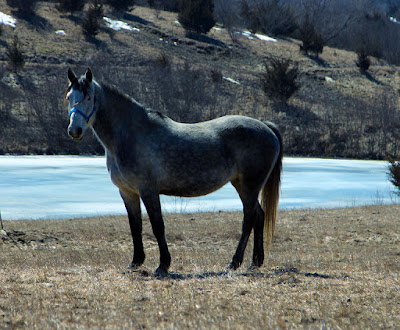 Sangria on the other hand probably IS pregnant.  She escaped during the Labor Day weekend, actually Sept 2nd and broke into Valiant's pasture knocking down the gate to get to him.  She is pictured from behind below and that belly looks like she got her way and conceived. She is such a determined mare. We were going to retire her from breeding so she could be used for trails. She is such a fun ride.  Oh well maybe she is just fat.  She would be due Aug 12th, if she is pregnant. 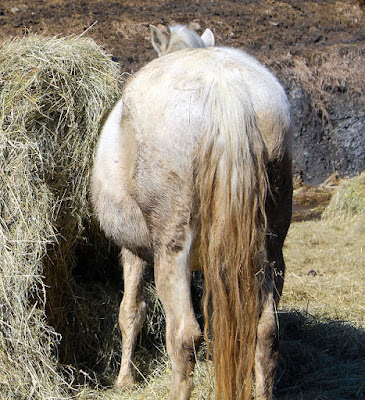 Missy did not look pregnant. I only got her covered that one time Karin showed up. We had her sonagrammed but Dr. Hoerr just had his little portable ultrasound machine which isn't as good as the one he usually brings. He thought he saw an embryonic vesicle and we marked her down as pregnant but now I can't help but wonder if what he saw was a cyst. 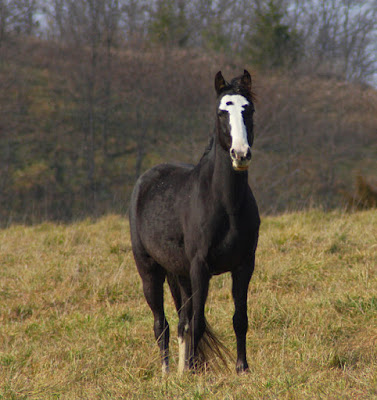 That will make Mike real happy to know she will be available all summer for trail rides. She is the perfect child's horse. This year when scheduling the ultrasounds we are going to be either checking them twice or waiting longer before we do the first one.  This is the 4th mare that we are questioning when checked at 18 days. The other 3 are Hadassah, Indy, Oksana all were confirmed then but now all are open.  Below are Ripper, Hadassah, Bunni and Jenis. 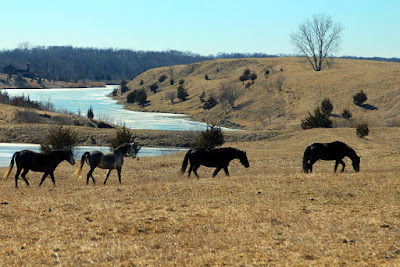 Foxy had been down at the creek getting a drink but came up to see us. 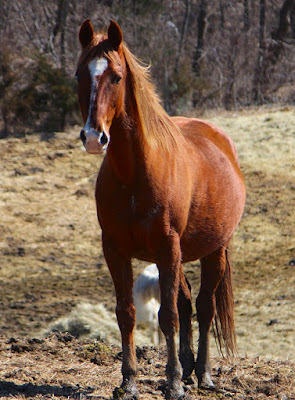 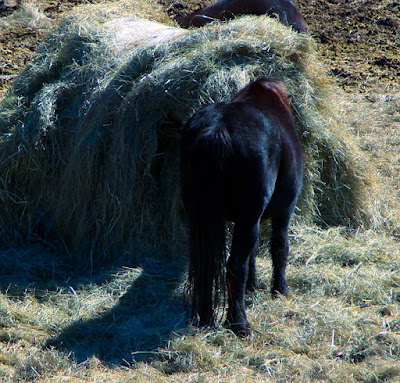 In the picture below I can't tell which of the Friesian mares are on either end from this distance but the group in the middle is Madiera behind Ripper and Hadassah, and facing right is Sheena. 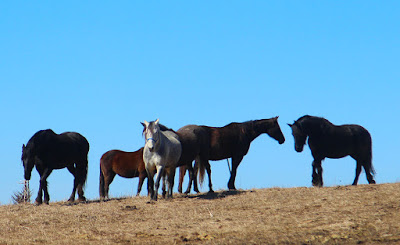 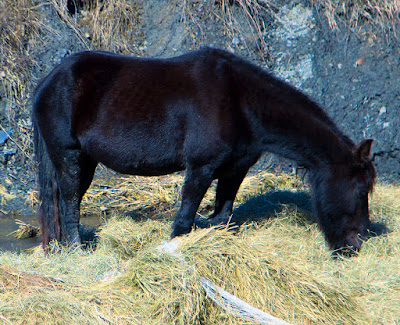 Below far right is Cookie. She and Bunni will need to come in on a dry lot before the spring grass arrives. Those two mares will founder on the rich spring grass. 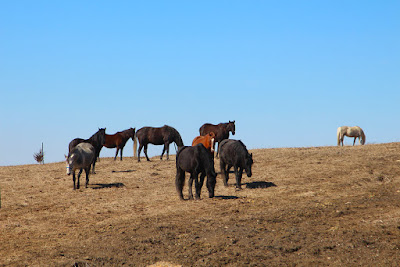 Karin is standing between Zalena and Sky. 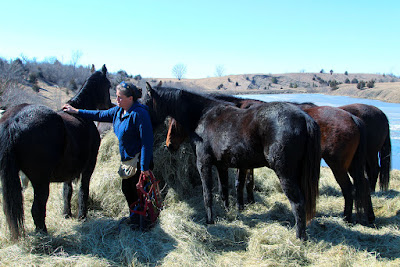 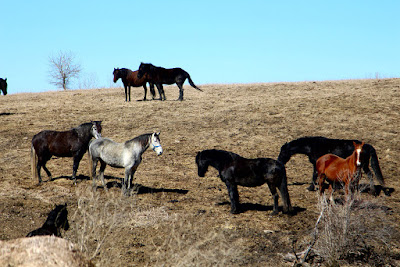 Below is Madiera and Tori. Madiera is obviously pregnant. Tori is suppose to be pregnant and due Aug 16th and her belly kind of looks like she is but we will plan on checking her again in a couple months and bring her back in May if we don't think she is. 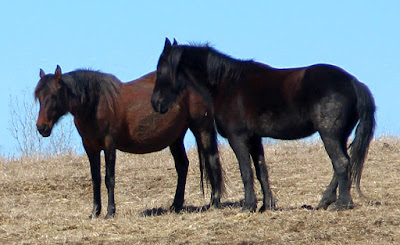 Below are Soul and Star both obviously pregnant. 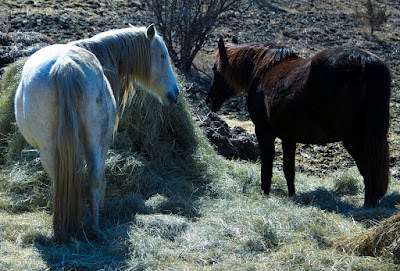 Lily, Jewel, Rosaleigh, Tatiana, Lola, Marika, and Sheena were also all obviously pregnant.We haltered Lola and Marika, took them out of the far gate and walked them down to the main gate. That is about a half a mile walk but it was easier going on the road instead of the soft squishy slippery muddy trails. Lisa is in the picture below. She usually follows us right to the gate but today stood at attention while watching us leave. 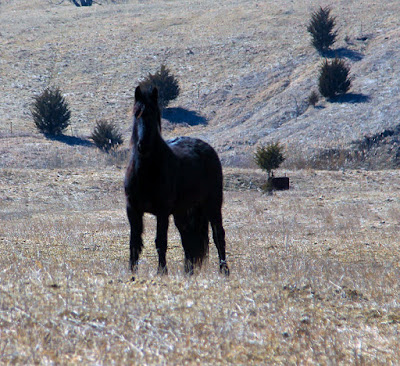 I snapped the picture below as we were leaving and what is interesting is the fence around the bales. The horses have 200 acres of freedom but those bales are completely fenced in to keep the horses and deer out of the hay until it is needed. 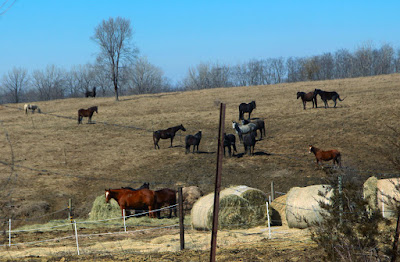 We were expecting 22 babies this year but now are subtracting those mares that came up open, Indy, Oksana, Hadassa and Missy but then we added Sangria.  So as it stands right now we are expecting 19 foals for 2019 stretching from April until late November.
Posted by Judy Sceggel at 8:57 PM