There were 10 people and 3 dogs on the walk this morning. We actually got done a little earlier than usual, it must have been all the competition. 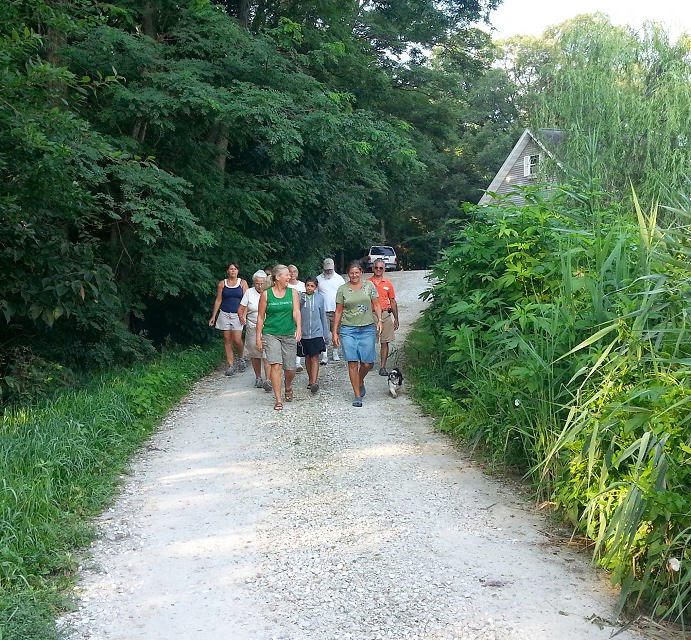 After the walk I drove down to TEMCO to pick up the mail then Meister's to process the mail. I didn't get a chance to finish, Mark came in around 10:30 to ask me to drive him  home, he didn't feel well. We think he got food poisoning. As soon as he was situated in the house the gooseneck trailer was unhooked from the truck and the stock trailer hooked up. I needed to make a trip to Middle Grove to pick up Hadassah for her ultrasound scheduled for Wednesday and Sally for the company coming here on Wednesday. The big gate going into the Middle Grove pasture fell off the hinge as it was being opened. Luckily no horses were in sight. The truck was driven in and the gate tied shut with a lead rope. I was able to take the truck and trailer to the top of the hill and could see the horses across the 5 acre lake. They heard the truck and came galloping up. I thought this was going to be so easy, Hadassah was the first one to greet me but when I went to put a halter on her she took off. I took the time to look over each of the horses there and ran my hands all over Promise and Rhiannon. Promise is huge. She is probably going to be taller than her mom Sangria. I didn't take the camera with me but had the video camera. For the next 3 hours in the hot sun I spent trying to catch naughty Hadassah. She let me pet her twice but when it came time to put the halter on she would take off running.  I would have persevered except a doe came bounding across the field and Hadassah decided to leave the herd and follow the deer, running into the woods and out of sight.


I finally just decided to take Sally and cancel the ultrasound. By the time I was on 116 I was so hot and thirsty I had to stop at Bee's for an ice cream cone and a big glass of water. By the time I got home it was after 3:00 pm.
Mom had invited 11 people for dinner and wanted to served marinated chicken breasts. The marinade was made and taken over to her then Mark was driven back down to Meisters as his van was left there.
Lola and Jewel's foals are too young to stay outside in this heat while the sun is beating down so those mares and foals were brought inside.
Jamie Stone came over for a visit and of course I had to play the piano for her. She traded me the piano for a stud fee to Valiant. She is trying to find a black Arabian mare she can buy to use the stud fee on so if anyone knows of one please let us know.
Posted by Judy Sceggel at 9:54 PM