We had such a busy day yesterday and didn't get home until almost 11:00 pm and then went straight to bed.
The work started right after breakfast. We got the manure spreader hooked up to the tractor and Mark started spreading that black gold on the field next to Joan's house. 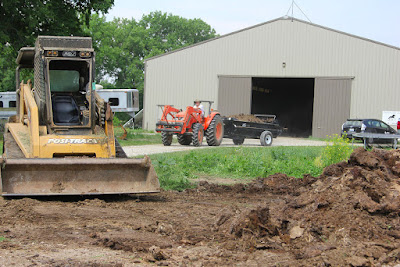 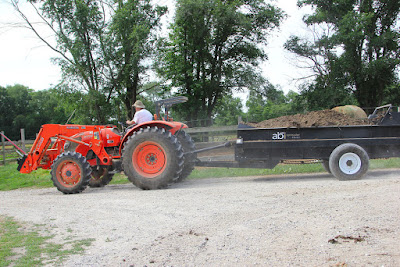 By the time he quit he figures he spread at least 30,000 pounds. We have one small pile of manure left but that will be saved until fall. While he worked on that I filled the weed sprayer and sprayed down the outdoor arena again. I am determined to keep that weeded without actually pulling weeds.
Lace was teased and covered by Valiant. Madeira was brought out and teased and she still won't show. She is still pretty protective of her filly and just won't go anywhere near Evan.  She and her filly were taken to the round pen for some pictures. Her filly is 24 days old and looks great. 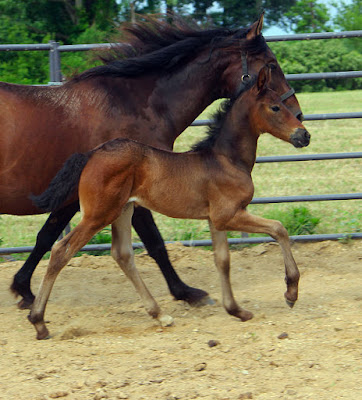 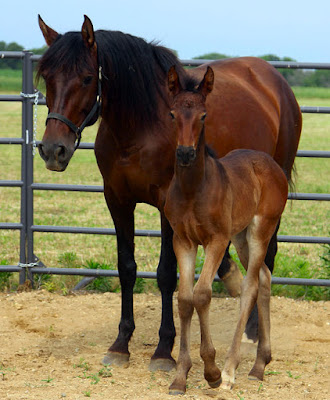 If you would like to see the rest of the pictures taken of her yesterday click HERE.
Next Foxy was taken out, it has been 3 weeks since her last cover and she should be showing if she is coming back in but thankfully she was not at all interested in going anywhere near either stallion.  Her filly is gorgeous. She is just over 6 weeks old and has amazing presence. She will be a super star in the dressage world. 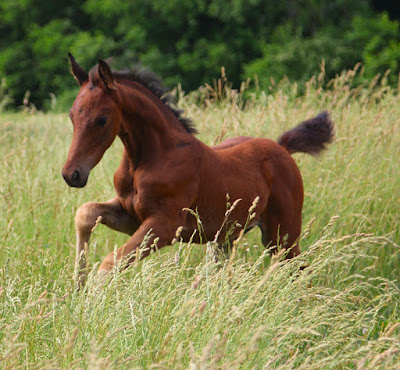 Check out that trot in the picture below and she wasn't even showing off! 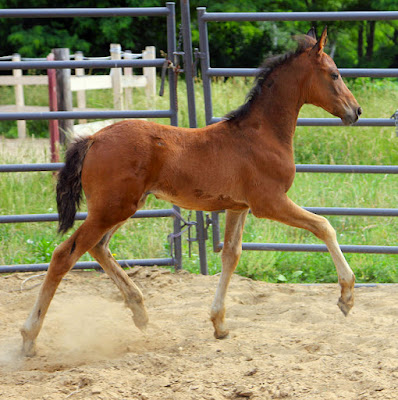 We have her listed at $3500.00 as we had no idea what Foxy would throw but this filly is so fancy we may have to up our price for her next foal.  Check out that neck on this filly. She was busy stripping the seed heads off the tall grass when I snapped that picture. 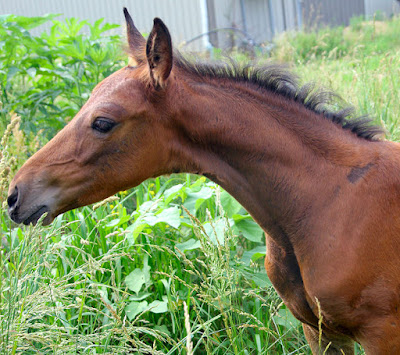 If you would like to see the rest of her pictures taken yesterday click HERE. I came inside to download the pictures and heard a thump coming from the upstairs. Emma was laying right by my side and I was the only person in the house so couldn't figure out what that noise could be when all of a sudden the ceiling over the front door collapsed with a big bang dropping a few of the ceiling tiles and plaster.  I couldn't figure out why, there was no moisture, everything was dry but when Mark came in he said it was because the man that installed an outlet and moved the light didn't secure the tile very well.  It had been bulging for a few years, I guess it just gave out right then. That will be another repair job that will just have to wait. I cleaned up the mess then went out to the barn to help Mark take the cover off the camping trailer and move it outside so the manure spreader could be put away.  The camper came through the winter perfectly. In other words no mice got in.  There were a few dead spiders that left a few webs. That will be cleaned out later.  We were heading to the house when David and Stephanie arrived with their 2 munchkins, Israel and Elisabet. They left their car for us so we didn't need to take out car seats.  David had purchased tickets to a Christian concert a long time ago and we had offered to babysit a long time ago before we knew there was going to be testimonies.  We cleaned up both needing a shower desperately then took Israel and Elisabet to McDonalds for supper before heading to church. Faith, her friend Ellie and Berlica did an amazing job playing with Israel and Elisabet during the testimonies which meant Mark and I could go in for all of them.  Each of the 4 told their story and each was different. Testimonies are one thing we never want to miss as we hear their 'heart' of why they felt the need to repent and when they surrendered to Jesus.  After they were over we took the Israel and Elisabet straight home as by this time it was after 9:00 pm.  Elisabet went right to sleep, she was pretty worn out but Israel was wired and we didn't even give him ANY sugar! I thought I had him asleep but when David and Stephanie got home he came bounding downstairs still full of energy.
Mom called, but it was during the testimonies and the phone was on vibrate so I didn't see or hear the phone until after we were on our way home. She left a voice message to tell me all was well and they made it to China.
AND for those who follow racing I found out this morning that Justify WON the Belmont which meant he WON the TRIPLE CROWN! 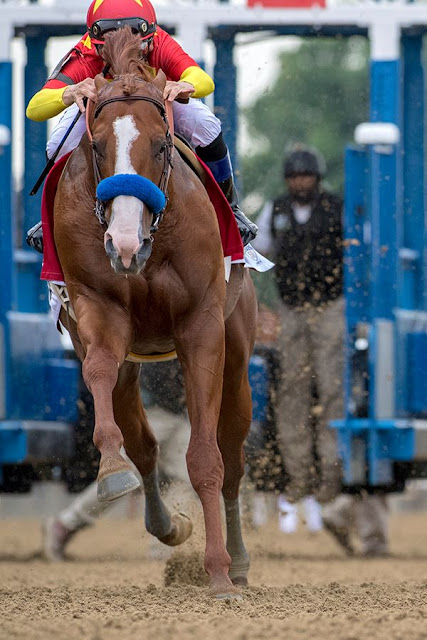