With the weather predicted to reach into the 90's Mark went out to weed wack early.  I wanted to get all the horse work done in the morning.  The mares still needing to be covered were teased and non of them are showing yet. Dr. Hoerr is coming on Monday so I guess we will spring for ultrasounds to see why Star and Madiera are not coming into season.  Sheena showed and was covered by Valiant. The next big job was to take the truck and trailer out to Middle Grove to pick up Jenis, Sangria and Roxanne. Mike and Diane are hosting their family for Father's day and Mike wanted a couple riding horses and I wanted to bring Roxanne home as she is due in a month. 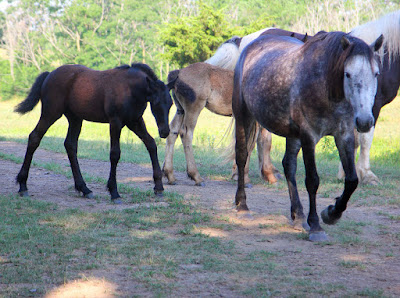 Above is Hadassah and Ella in front of Galena and Drifter and below is Soul's colt. 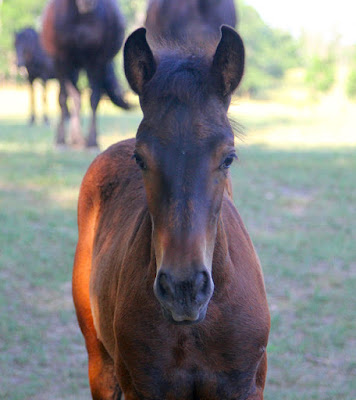 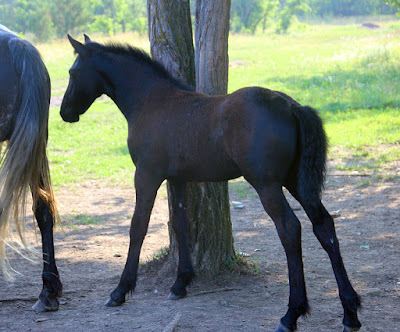 Above is Ella (Hadassah x Evan) and below is Amelia (Missy x Evan). 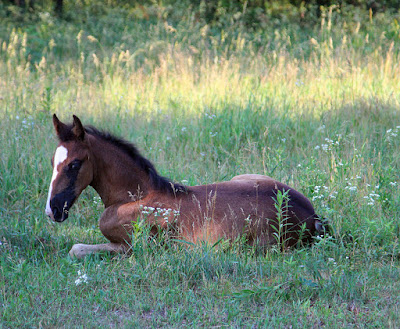 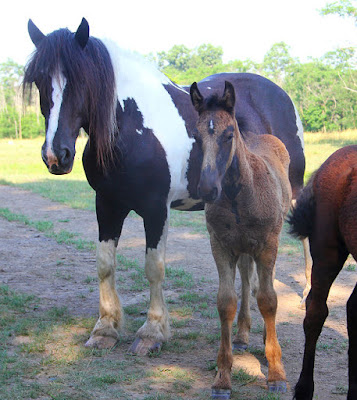 Above is Galena and Drifter and below is Foxy's filly. Both of these foals are by Valiant. 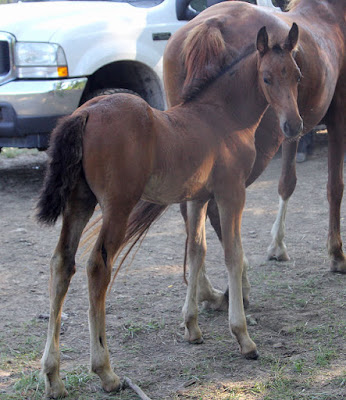 Below left is Wicktoria who was bred to Valiant and is due Aug 15th and right is Roxanne who was bred to Evan and due July 18th. Both are really showing their pregnancies. 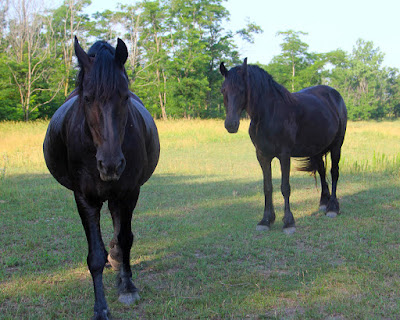 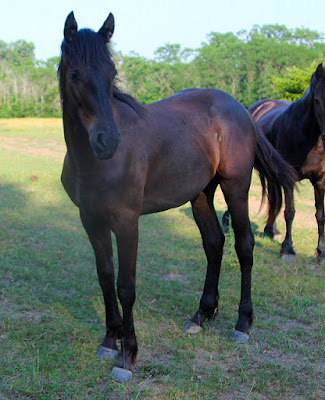 Above is Ella Skye (Sheena x Valiant 2017 filly) and below is Roxanne. 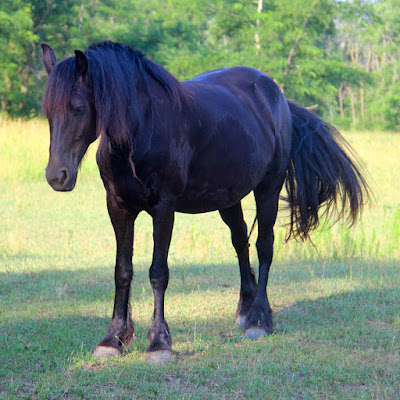 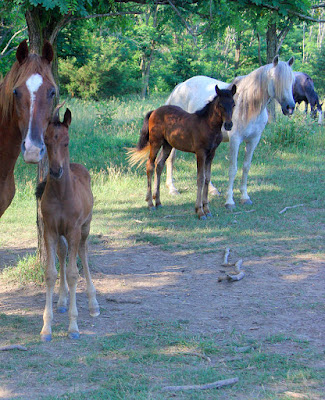 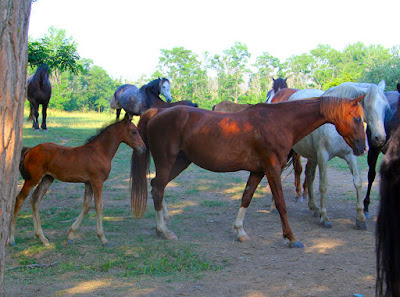 Below is Soul and her colt, behind her all the way to the right is Indy and next to her is Oksana. I guess I didn't get any pictures of Tatiana but checked her and she is obviously pregnant. 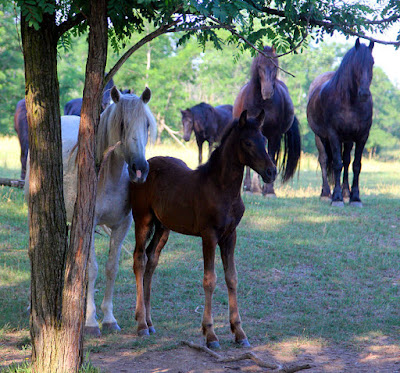 I loaded Jenis and Sangria in the front of the trailer and Roxanne in the back.  Jenis and Sangria look great, if the weather cools down a bit I'll get new pictures of both of them.  I drove out the back way so I could try out the new road.  I can't remember what they named the big road,  but the road going off to the right is called Raven's Road. 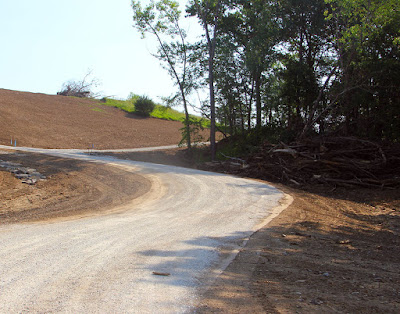 Below I am traveling on Raven's Road. His grave is right there. This road takes one over to the campground. 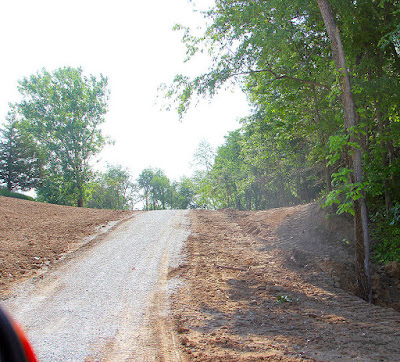 As soon as I got back the mares that were trailered were hosed down and fly sprayed. Anna had the girls swimming at the lake so I went over there to cool off a bit. Braelyn was fishing with a net and swimming underwater to place the net in the right place. 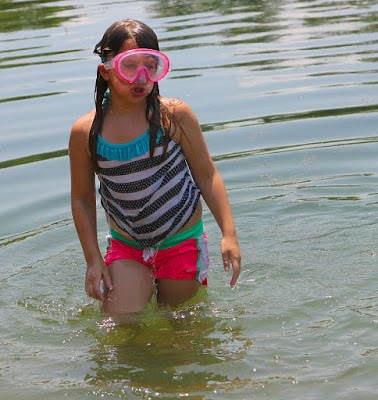 She was actually catching fish this way using a flower as bait. Below Taegan is putting the fish in the bucket but stopped to show me first. 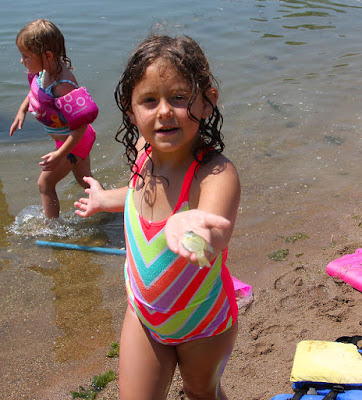 Emma waded out and was looking over at Joan's house when Huxley came swimming up to her. 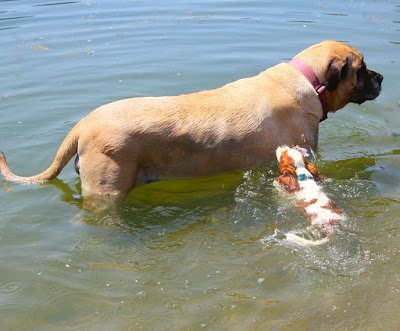 Her reaction was hilarious when Hux hit her side. She whirled believing she was being attacked by a shark or something and almost drowned poor Hux. 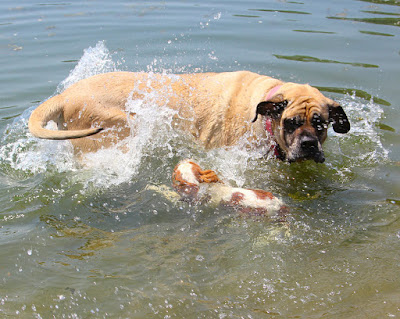 Kensley and Taegan tried fishing with the nets but they didn't have any luck. 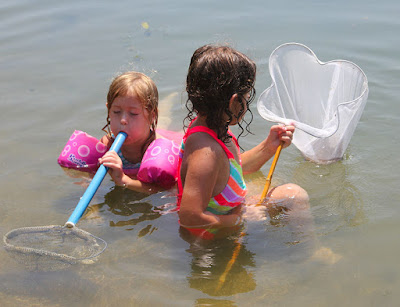 Taegan thought it would be more fun to give Kensley rides on the sled. 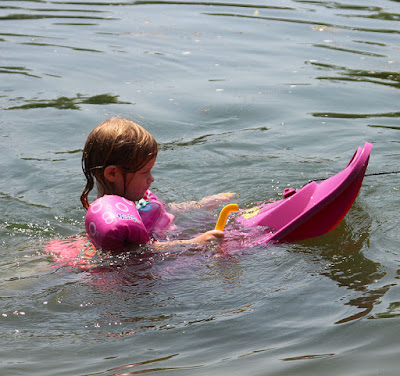 Braelyn caught about 20 little fish with her net, we let them all go then went to our house for lunch.  This evening Mark and I drove to Grace church in Morton, IL for Ruth the Musical. The music was top notch. The entry fee was a free will donation to the Peoria Rescue Mission . It was a packed house and the music was top notch but after spending the day outside working we were both tired and left for home at the intermission.