It was cool this morning on our walk, we stopped at the Indian camp site and Joan told us some of the campers got cold during the night.  I took lots of pictures of the horseback riding, this time they had a creek crossing. Below are a few pictures the rest will be worked on tomorrow. 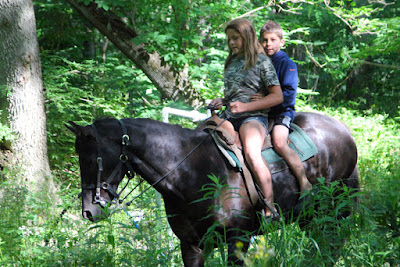 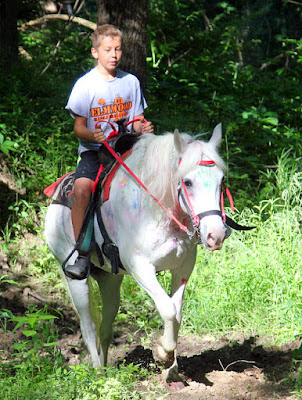 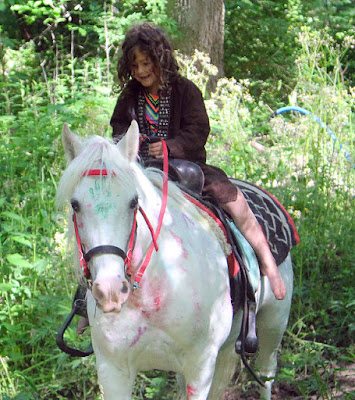 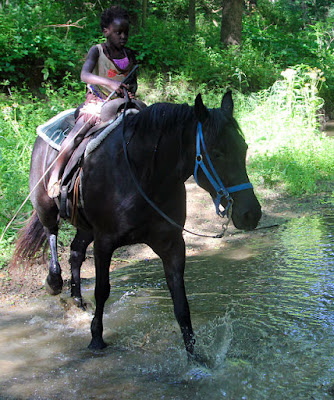 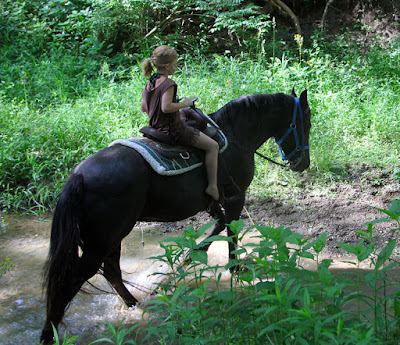 Each group got to gallop up the final hill. Below is the last group heading up.
After everyone had a turn on the horses, those 3 were put away and Karin came here to help me get Lacy, Mercede's mare covered by Valiant. Shaeya, Sadie and Karin took Soul, Jewel and Star along with their foals out on the death trails backward which worked much better for the foals. They didn't have to go near Valiant's pasture. Jewel's filly was having a ball bucking and galloping in the field between the rows of raked hay. 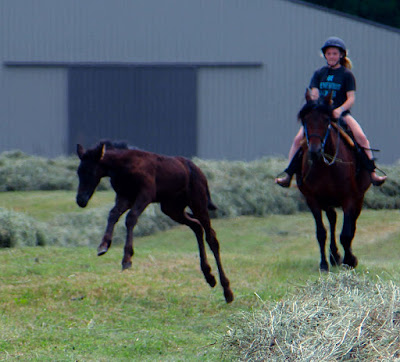 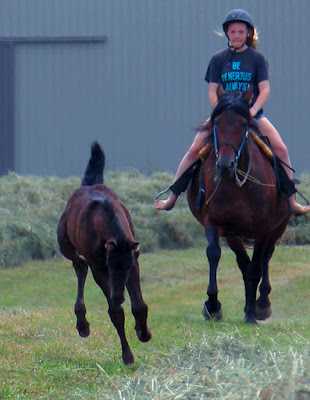 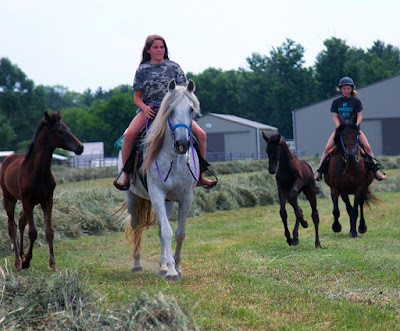 We came upon the Indians out for a hunting gathering hike to find food. 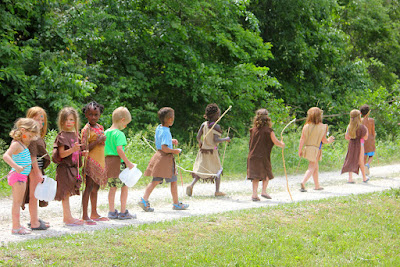 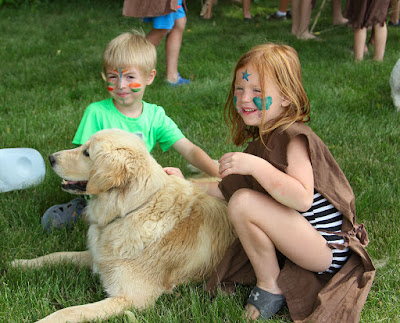 They took their trusty wolf Studley to keep them all safe from wild animals. Below Faith is feeding a baby raccoon. One never knows what the Indians will find on their hikes. 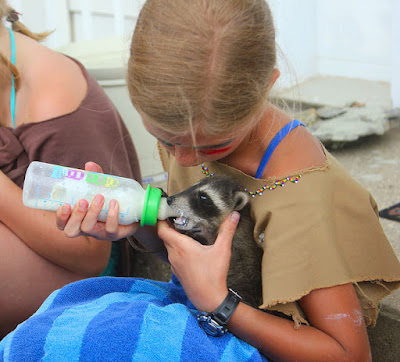 When it was lunch time Joan had them all line up and the older Indian's brought herbs over for the younger ones to smell. They found many herbs growing including chives, sassafras root,  the lemony smelling leaves of the sassafras tree,  sweet basil, rosemary, dill and that awful smelling cilantro. 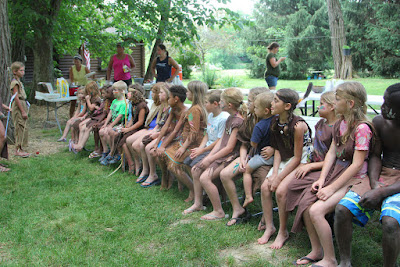 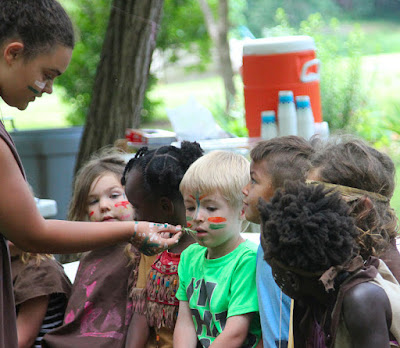 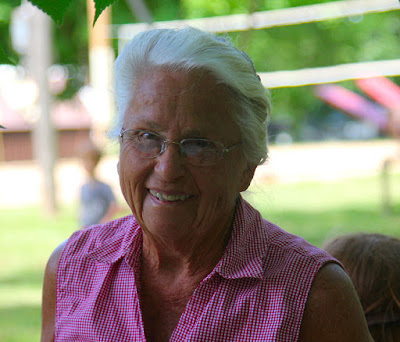 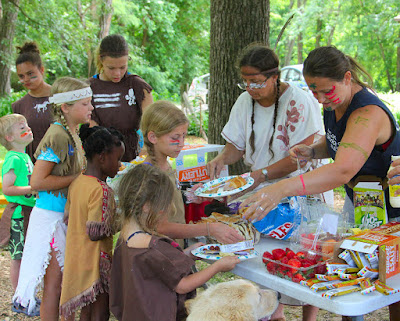 After lunch Sadie and Shaeya took Bunni and Cookie down to the water. Karin wanted to wash the paint off so they took the horses swimming. 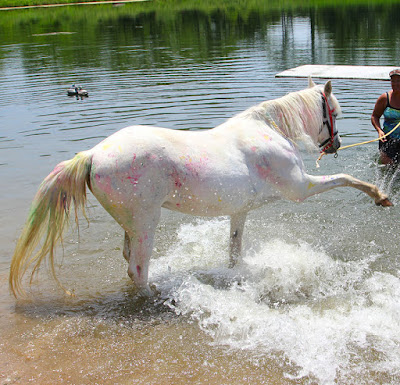 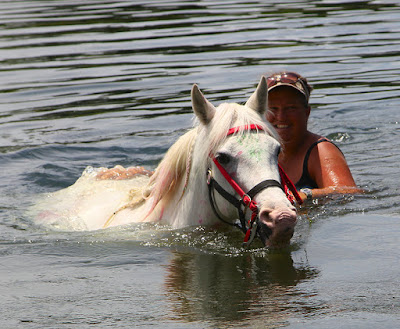 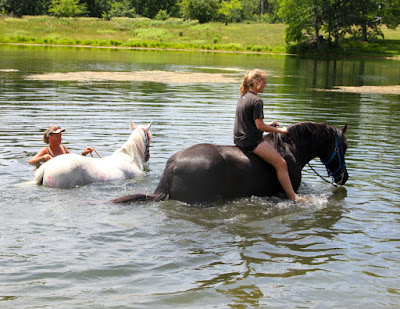 Below Joan is explaining how to make sand candles. Each Indian is listening intently. 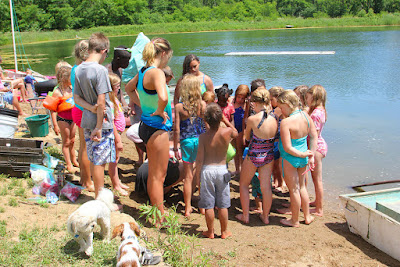 The wax is melted in old tin cans on top of a home made burner. Joan explained to the campers how the Indians would render the fat of the animal into tallow which would burn. 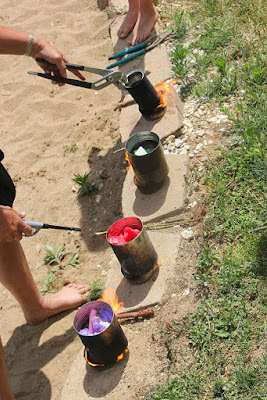 Below are a couple sand candles in the making. 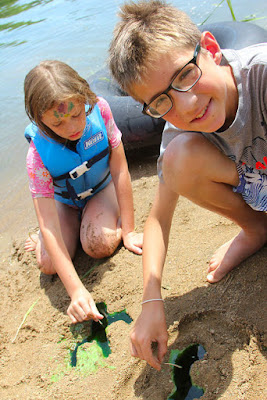 Next were the canoe races.


After dinner Joan had them practice holding their water on top of their heads, like an Indian squaw carrying water back from a creek. 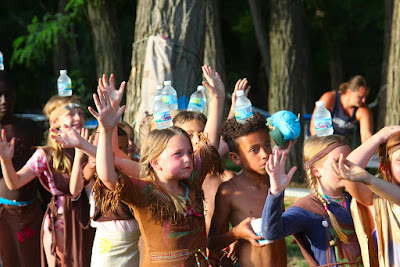 This evening they had a camp fire and lit all the candles they made for light. 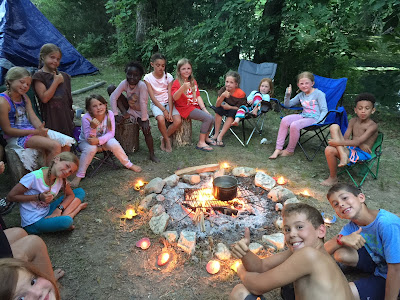 They had plenty of light and the candles worked perfectly. 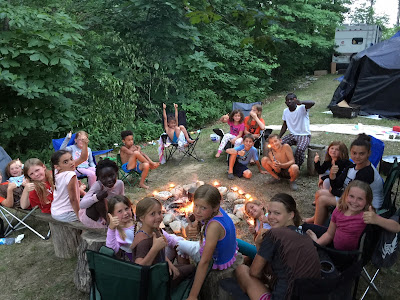 They had a wonderful day today and this is the last overnight. Tomorrow is the last day of the 2018 Indian camp. They have been boiling down tree sap all day to make maple syrup and will eat mulberry pancakes served with that maple syrup for breakfast. For lunch they will be cooking the fish they caught and cleaned along with frog legs, and for supper they will be roasting chunks of deer meat over the fire.
The farmer came to start baling but was not able to finish. I think the baler broke down.  Zalena and her colt were put out for the night and the stall cleaned. The ONLY reason Zalena and her colt need to be inside right now is that her poor colt lost big chunks of his coat while he was at the vet clinic while we were in Connecticut.  We don't know why and neither did the vet clinic. Until the hair grows in we can't have him outside in the daylight. He will get sunburned.  Once the outside work was finished it was time to put in a little time inside. Laundry needed to be done and LOTS of dishes. I didn't make it to church tonight as it was my turn to serve dinner to the campers but listened online while work was done inside. What a great day.
Posted by Judy Sceggel at 8:58 PM