I'll start this with the China update from Karin and mom. They called tonight which was Monday morning to tell us about their day yesterday both the wall around the city of Xi'on and the visit to the Great Mosque.
There were a lot of soldiers in this city as it is Ramadan and the Muslim's get into a fervor and there is talk of Jihad so mom and Karin had soldiers around them pretty much all day to keep them safe.  What was sad was the guide had just finished telling Karin, "our Muslims are not like yours, ours are peaceful." and yet the city was filled with soldiers.  The other sad thing was the acid attacks on women here.  Karin saw a 20 something girl, her face disfigured by an acid attack and they still have honor killings. There is never honor in killing women!
We had a very nice Father's day. I went out early to tease the mares and Madiera showed. She was covered by Evan.  That is one mare I won't need to have sonagrammed tomorrow.
Our Airbnb guest left around 10:00 am today, after we left for church. She wrote us a nice text that they loved the apartment and especially loved the home made cookies. Ashley, the lady that actually booked the apartment wrote: "We loved the cookies, they were amazing and I think I ate them all by myself lol." They gave us a 5 star rating and wrote: “This place was amazing! It was more beautiful in person. Great place to get away from the city. Very clean and very homey. ”  Then left us a personal note that said: “Thanks again for everything we loved it and we would love to come back and stay again some time." What a nice thing to write.  This was our first time hosting for Airbnd and were happy with how it went. We have guests coming in on the 20th leaving on the 23rd and then July 5th-9th.
Mike Kaisner had the morning service for Father's day. He read in Genesis 45 where Father Abraham was to sacrifice Isaac his son and how each step of the way how his father heart had to ache but yet he still trusted God.  After the service Tim Funk surprised us with an engagement announcement. Karl Weyeneth was announced to Janet Rocke from Tremont. Amy Koch was sent a text that we were going to be stealing one of their sisters.  After church Sarah and Nolan brought Zion over 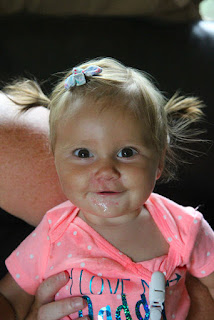 Phil and Anna brought Braelyn, Taegan and Kensley over and Rhoda and Lee brought over a slip and slide for the kids to use today as it is so hot outside. I somehow took it sideways and can't figure out how to flip it.
They had a good time. Mark grilled Parmesan chicken with peppers and onions for supper. Anna brought over watermelon and we had chocolate ice cream for dessert. We ended up over at the playground for volley ball. Rachel pulled out the Kubota over to level the sand before the games started up. 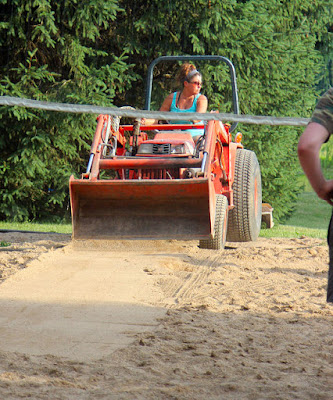 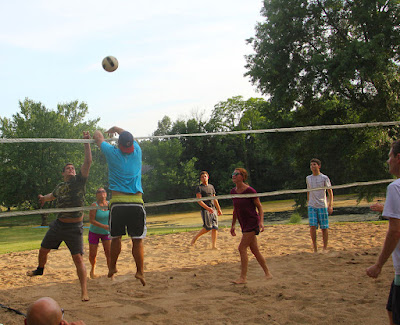 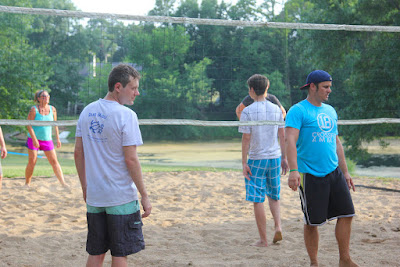 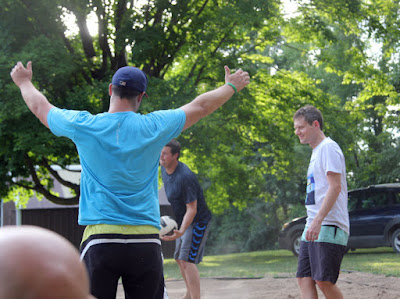 Mike and Diane came riding over on Sheena and Jenis. 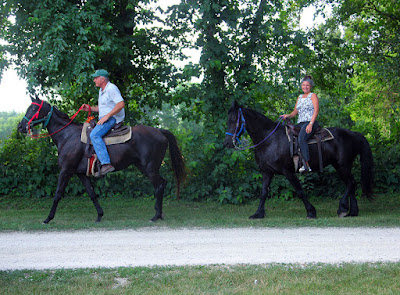 After the horses were put away they came over to the playground to visit. Gary and Marie arrived with Gary carrying Timmy who has a broken leg.  Bethany, Joan's daughter came today from Bluffton with her sons Joshua and William. She will be joining Joan and Heather tonight for Gulf Shores, Alabama. Joan is now managing mom's condo down there and she has some work to do on it. The kids are excited about the trip and will have a lot of fun while Joan works. They are taking the 12 passenger van down and have it filled with Heather and her 3, Joan and her 3 youngest, and Bethany and her 2.
Posted by Judy Sceggel at 10:16 PM