After the walk today the plan was to have Anna pick me up and drive me to my doctor appointment in Brimfield which was at 9:50 am. Knowing Anna needed to be back by 11:00 am to meet Taegan's bus when Sarah asked if I could go with her at 11:00 am to the vet to have Rizzy's puppies checked over and dew claws removed I said sure. We arrived at Eagle Family medicine just a few minutes early and by 9:50 am I was ushered right in. The shirt was removed and the all too familiar gown put on and then I waited. And waited and waited. At 10:22 am I'm thinking, "ok at 10:30 am I'm just going to get dressed and walk out and try to reschedule for later except at 10:25 pm Dr. Bevil opened the door. I jumped off the table, flashed open the gown enough to expose the entire scar and stab wounds from the chest tubes and said, "you have 4 minutes!"
OK I think I really shocked poor Dr. Bevil. Well since he had 4 minutes he had me sit back down, poked and prodded, listened to my lungs and heart and pronounced me incredible. He actually used a few other words but I only heard the word incredible.  Of course I still can't drive or lift more than a gallon of milk for 6 weeks but evidently I'm healing well. Yep I was walking out of that office right at 10:30 am and we made it home in plenty of time.
Sarah's puppies all got a good report. Rhoda stopped at Big R to pick up shots for Ethan and Flynn. Then brought them both into the stalls. They both got West Nile, EEE WEE and a tetanus shot. The empty bags were put in with their paper work. Both colts were excellent not moving at all when she gave the shot. She also brought in Oksana and Darla so Darla could be haltered and worked with. She left them in the left stall and brought Sangria and Serenity into the right stall. Serenity just seemed a bit low key to me today so I had Rhoda check her umbilical cord but Rhoda thought it felt dry and normal. Next Rhoda took her temperature and sure enough she had a fever of 103.2. Hoerr vet clinic was called to see if we should bring her to them or did Dr. Hoerr want to just add her in with the rest of what he would be doing here at the farm today. Chris told us he was just going to see her when he came. While waiting Rhoda pulled Titiana out for some under saddle training. Today she walked and trotted very nicely in the round pen for Rhoda. 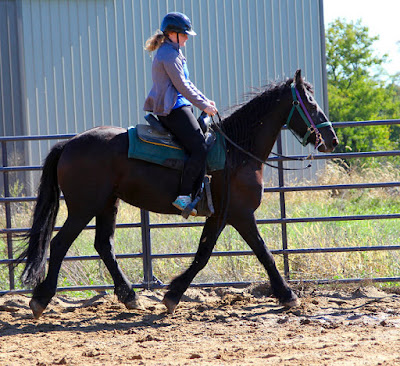 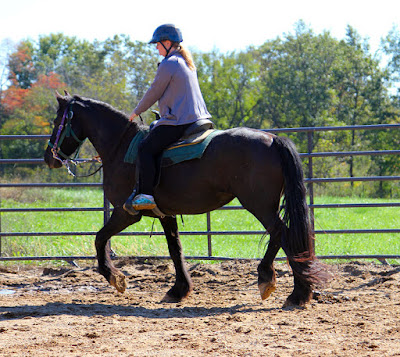 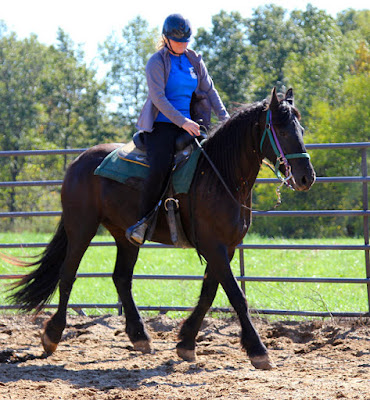 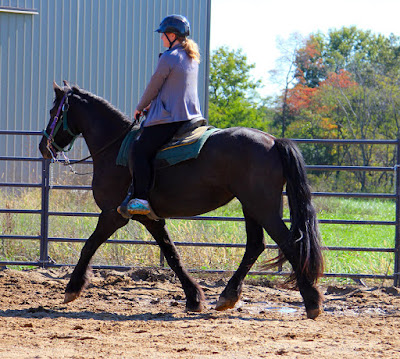 Rhoda took her into the indoor to untack and finished her training by asking Titiana for a bow. Mark came home with all the vegetables needed for the beef barley soup. I spent about an hour chopping and stirring but the soup was sure smelling good. Dr. Hoerr arrived at 4:30 pm and we took him right in to see Serenity. Below he is checking her umbilical cord. 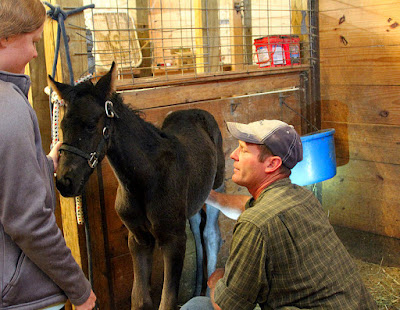 As that felt dry and normal next he checked to see if she was dehydrated but she was fine. 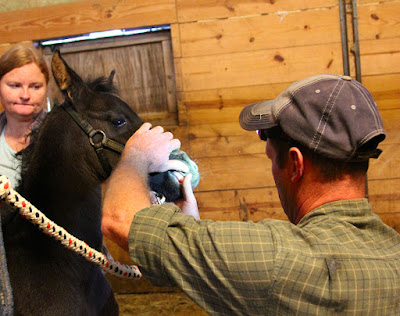 She has a fever but the only thing Dr. Hoerr could find is where she banged up her knee just a bit when we were tying her and a tiny scrape on her ankle. He gave her a shot of Exceed and another of Gentamician then left 4 more shots with me. Serenity will get 1 a day for the next 4 days. I'll have to ask for help tomorrow morning as Rhoda isn't coming tomorrow. 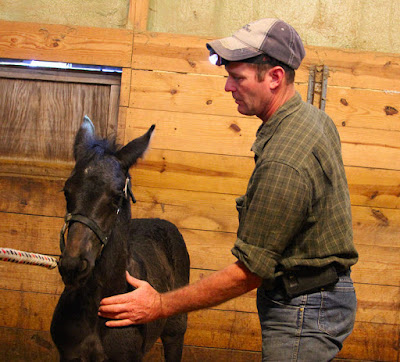 The next job on the schedule was for Dr. Hoerr to check over Flynn and Ethan. I forgot to take pictures of him doing that but they both passed with flying colors. Rhoda took those 2 boys out and brought in Titiana for her ultrasound. 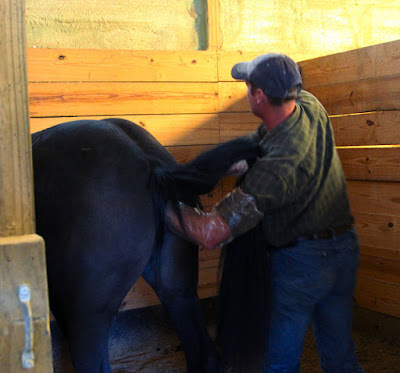 He found the 17 day embryonic vesicle right away. Titiana was bred to Valiant and is due Sept 11th, 2018. He checked for twins but didn't find any. 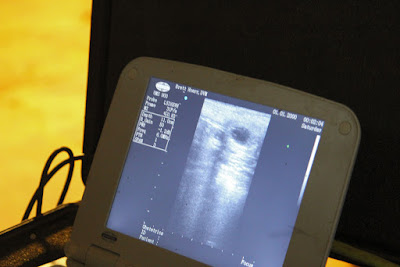 The next mare in was Indy. 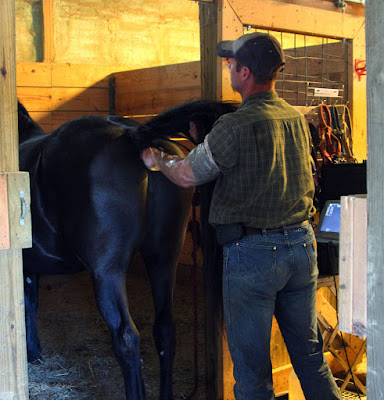 Indy was farther along and we could even see the embryo growing on the embryonic vesicle wall. I've circled it below. 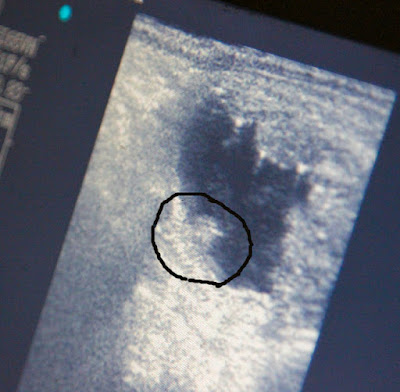 Indy was bred to Evan and is due Sept 2nd, 2018. The last mare today to be sonagrammed was Oksana. 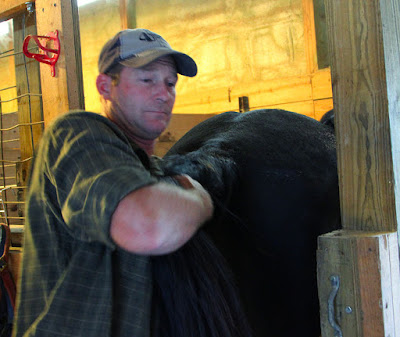 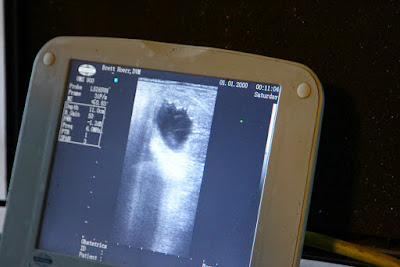 By this time I had missed my afternoon nap and was actually pretty exhausted. I sat down with a bowl of beef barley soup and had just finished it up when Dan arrived. He was invited in, given a bowl of soup then asked to tell us how the Spoon River Drive went. I know they missed the ponies there this year but he said over a thousand people came each Saturday.  The Lighthouse school made around $6000.00 and were thankful for all that donated baked goods, items for the garage sale, all that helped and especially all the customers. It is almost 8:00 pm and this is the first day since home from Mayo Clinic I've not taken a nap. Yes it really is incredible. I really am thankful for all the prayers for the surgery and now for healing and very thankful for all the encouraging cards from people.
Posted by Judy Sceggel at 8:00 PM