The day started with a message that the man buying Lily's colt was not going to be able to afford him and ended with sale pending on him. Shaeya and Sadie were here so I asked them to help me get some new pictures of him for the website. We took him to the outdoor arena and were all amazed at his HUGE movement. We will have to get a video of him, he truly shocked us. Although I don't know why we were so amazed, all of Lily's foals are spectacular. He gets so much air time with each stride. 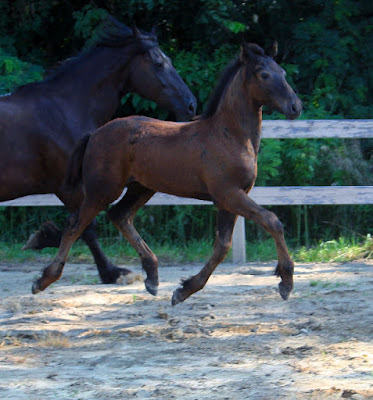 Our airbnb guests left as we were walking this morning and they gave me a 5 star rating and leaving this review:   “A great apartment on a working farm! We were traveling with dogs and Judy went out of her way to be accommodating. Great communication--as well as added touches, like supplying us with cookies. We really enjoyed our stay.” “Thanks for being so accommodating of Kay, me and all of the dogs. It was a lovely apartment and loved having the stalls in the back that we could use for the dogs. The newborn foal was an added bonus.
Karin brought Oksana out, she has been wanting to try Oksana for vaulting and today Oksana got her very first lesson. Sadie was asked to lay on her back and slip off her rear end while Karin kept her walking. She did reasonably well. 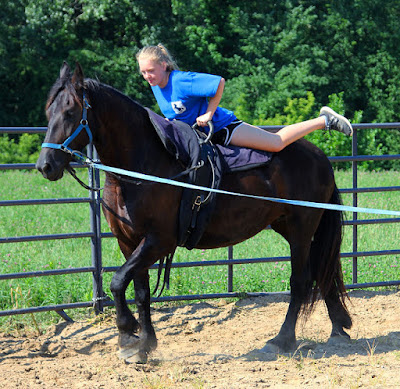 Shaeya was a vaulter so Karin asked her to do some of the movements. 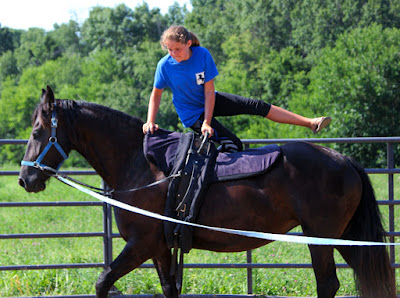 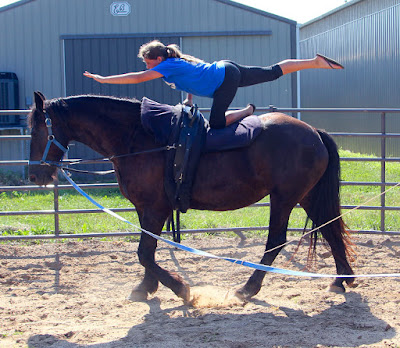 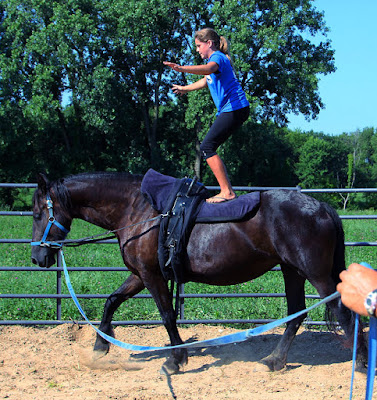 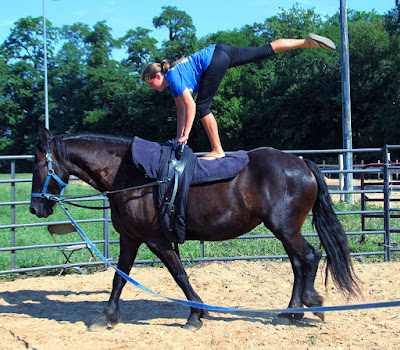 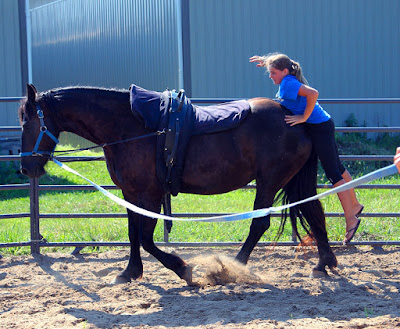 Oksana is such a laid back mare she accepted pretty much everything they asked her to do.
The next job was to take Star, Oksana and Sangria out on the trails and then the second ride was Sally, Jenis and Lily out on the trails.  Star's colt and Lily's colt had to cross some pretty deep creeks and slide down some muddy hills today.
If you would like to see those pictures click HERE.
We took a break then for lunch and picked up the special at the Warehouse in Hanna City which was chicken strips and fries. Dr. Hoerr arrived around 1:15 pm to ultrasound the mares.  Star was the first mare done and she had just ovulated so we will need to wait a couple weeks then give her a shot to bring her in. Zalena, Madiera and Sheena were all pregnant. Oksana is in season right now and has a 41 mm follicle so was covered by Evan. We took Roxanne and her day old filly outside to get a few pictures but I lost those pictures. The computer didn't download them, I didn't catch that they weren't downloaded and erased all the pictures on the card. Oh well hopefully I can get some tomorrow.
Mark got home from work early so I grabbed his car (mine was not available) and drove to TEMCO to pick up the Berean mail, then to Sam's club to buy groceries for the Berean meal, then to the Berean office to drop off the mail, along with  the icecream and cake which we will have tomorrow for dessert before coming home and putting away the rest of the groceries.
This evening I finished uploading the rest of the pictures from the pony rides at the Giant Goose Ranch on Saturday. If you would like to see them click HERE but I will warn you there are a LOT of pictures.  Right after these were posted I got this comment:  You allow riding in flip Flops?   Pretty funny, how quickly the need to criticize others these days.
A very nice message came in from Diane, a lady that bred her mare to Evan. This Evan daughter is now out doing cross country jumps and winning. 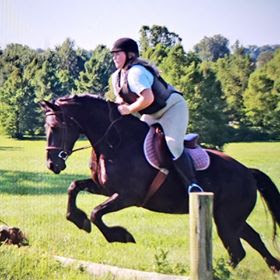 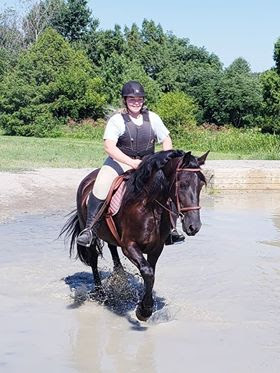 Thanks so much Diane for sending along the pictures of your beautiful Evan daughter...ps your daughter is also beautiful.
The day ended with SALE PENDING on Lily's colt.  The man buying Zalena's colt is going to buy Lily's colt too.  He will be mailing the deposit.