Each time I woke up during the night to check the foaling camera there was more snow on the ground. By morning the snow mixed with rain and ice pellets was covering pretty much everything. The picture of the evergreen was taken this morning. 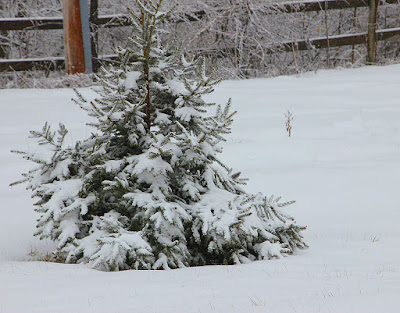 Karin arrived early this morning to help test Rosalie. Rosalie is only showing blue at 175 so more than likely will not deliver today or tonight but with this weather she still needs to be inside.
Mark went out to shovel while I went out to move mares and clean stalls. The snow was so heavy that each shovel full was an effort.  At one point it stopped and I thought it would be a good idea to take a few pictures of the foals in the snow. That wasn't too smart, by the time I got both mares and foals outside the snow was back with a vengeance. Both foals look like a reverse leopard spotted Appaloosas. 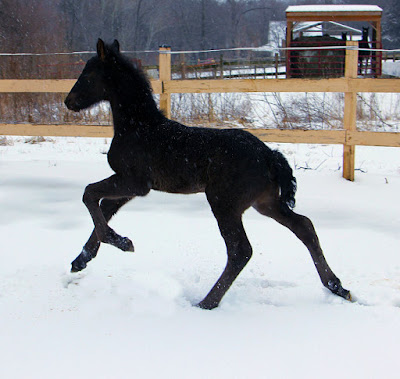 Above is Luka, Anna's colt and below is Hadassah's filly 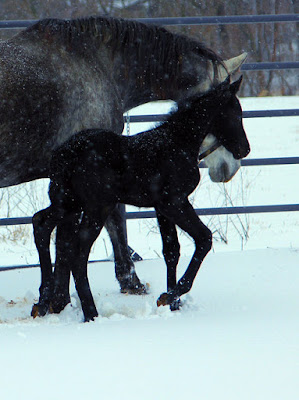 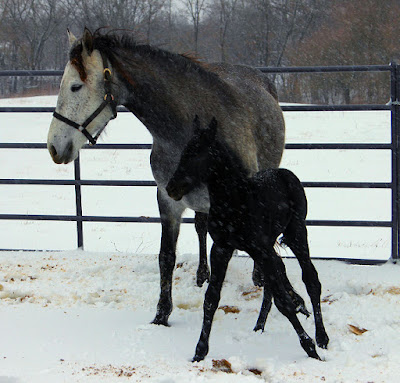 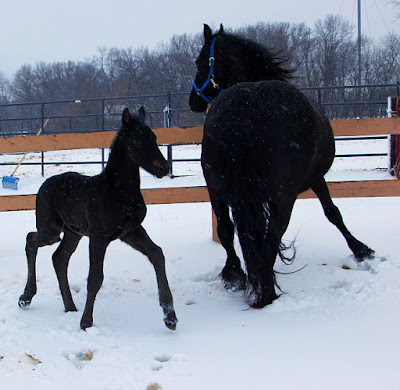 Mark needed to get the skid steer out of the indoor to start plowing and the only way to open the big doors was to shovel all the snow that had piled up on them, all 16 feet of door then another 16 feet of track. By the time I had that done I was more than ready for a rest. The mares and foals were put in the stalls and the two trucks moved inside. The weanling paddock needed another round bale. That was a treat doing that in the snow storm. Each time I got off the tractor (to wrap the round bale or open a gate) when I got back on the tractor the seat was full of snow. I was soaked all the way through by the time that job was finished. Karin and Jackie went to Jessica's new house to help with the painting. When Jessica got home from working all day there she got stuck in the drive. 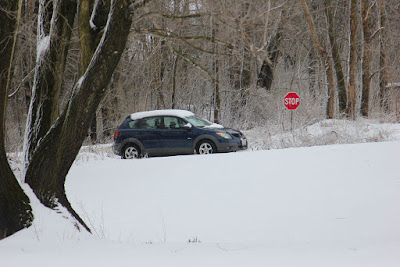 Mark was just heading up to the barn to get the skid steer to start plowing so pulled her out. 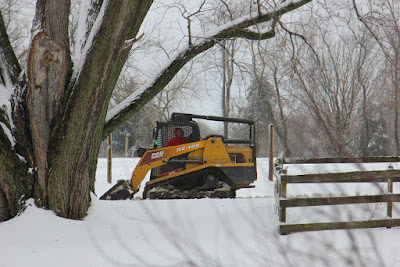 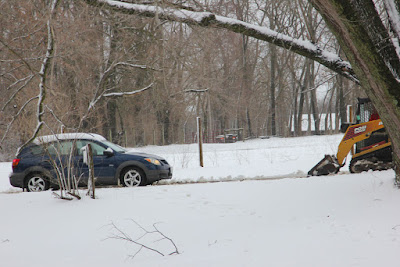 This snow is so heavy that when he was scooping he was making huge snow boulders. 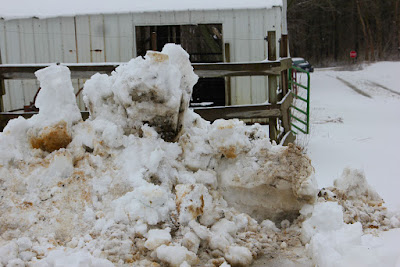 Emma kept wanting to go out but would come right back in. It was just too sloppy wet and cold for her. 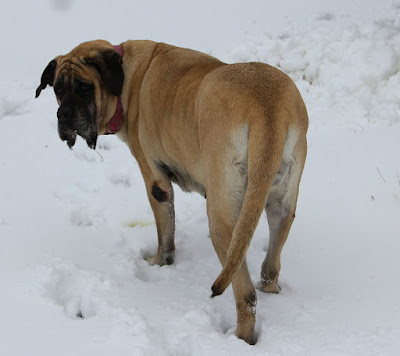 I was amazed at how many of the horses were standing out of their shelters during the storm. Below is Evan. Silly horses they could have stayed dry. 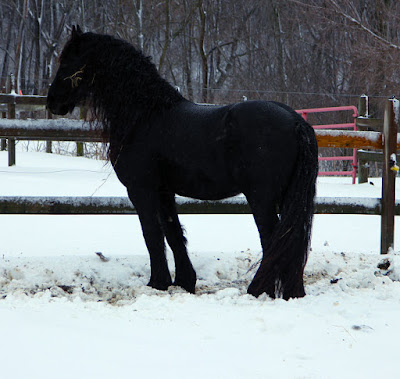 Mark got a fire going this afternoon in the wood burner which kept the house nice and warm. Rhonda was suppose to have out of town guests for dinner tonight and had it all cooked when the guests decided the roads were just too awful. That meant I, Mark, mom and Sarah Reinhard all got lucky!  We were the only ones home in the neighborhood. Rachel and David are in Las Vegas, Joan is at a retreat and Mike and Diane were at Middle Grove.  Our only problem was picking up mom and Sarah. We were suppose to be at Spark and Rhonda's at 5:00 pm but we couldn't get the car out of mom's drive and this was AFTER Mark had plowed. Sarah ended up shoveling mom's sidewalk 3 times but the snow was coming down so fast everything got covered.  It was worth the getting stuck though for dinner, wow did we eat good. Rhonda made paprika chicken, great plains rolls with butter and rhubarb jam, a big salad and mom brought over asparagus served with hard boiled egg slices topped with hollandaise sauce.  For dessert Rhonda served angel food cake with whip cream and strawberries. Below are happy faces and empty plates. 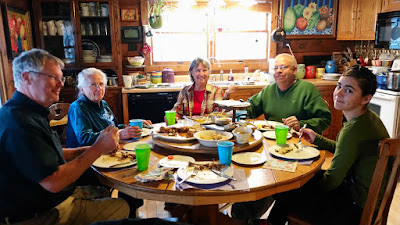 After dinner we played games until I had to leave for work. Spark offered to take mom and Sarah home so Mark and I could leave before dark.  I still needed to get the big doors shut to the indoor arena which took more shoveling then move the mares and foals out of the stalls into the indoor. The stalls were cleaned and freshly bedded then Rosalie, Marika and Lola were all stalled just in case. We sure can't have a mare deliver out in this kind of weather. I'm so very thankful for nice dry stalls, a great monitoring system and a dry indoor arena.
Posted by Judy Sceggel at 8:52 PM