We had another great day, the fair was very well attended for a Sunday. We didn't expect many people to be there at the 1:00 pm performance but were pleasantly surprised by the crowd. We only had one problem. Galena's rein broke, she took off galloping to the other end of the arena and Nolan couldn't stop her with just 1 rein. I thought it was part of the play but couldn't figure out why Nolan got off her and led her out at the end.  The hero of the weekend was Samantha, she brought her full sized sewing machine from home to the hotel. WHO does that? During the Saturday performance Oksana stepped on Rebekah's dress and tore it. Not a problem, Samantha whips out that handy dandy sewing machine and repairs it! We went through 50 pounds of popcorn and 3 gallons of popcorn oil in 3 days along with hundreds of prizes. Those 10 boxes of gummy worms, only 1 box was left by the time the play was over.  The teardown was amazing, we finished the play at 1:30 pm and by 2:00 pm the stalls decorations were down, packed up and taken to the trailer. It took Rhoda, Sarah, Karin and me 4 hours to put them up. Amazing how quickly teardown goes with many hands. Steven Marchal showed up and helped out too. So very thankful for the extra help. Below is Steven in our aisle way, no more pretty decorations. The horses are still in their stalls though. 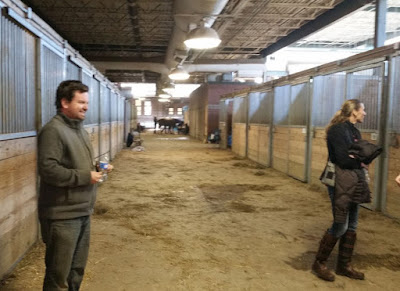 We are not suppose to take them away until the fair is over at 5:00 pm.  Karin and I were left with 10 horses, water buckets and 2 chairs.  Amy, her daughter Sarah and her grand daughter Olivia also packed up and they left around 3:00 pm.
We were dreading taking those trips up and down the hill to get the 10 horses loaded into the trailer and then CeCi arrived. She even brought another pair of hands and instead of 5 trips down to the trailer we were able to do the loading with just 2 trips. Oh how wonderful it is to have willing friends to help share the labor.  Once we got home I was able to get Shaeya and Evan's performance up:     Below is the Horsemeister Play:
Posted by Judy Sceggel at 8:58 PM