To Train in the Rain

Most of us ended up at mom's this morning pretending that we were going to walk but the rain gave us all a good excuse to go inside and visit. The temperature was 34 degrees and that rain was just plain downright cold!
Rhoda had the day off so decided to use the indoor for some training today. We have someone coming to look at Whitney on Friday. Whitney hasn't been worked with much since we brought her back, Emily was only able to ride her once last week. 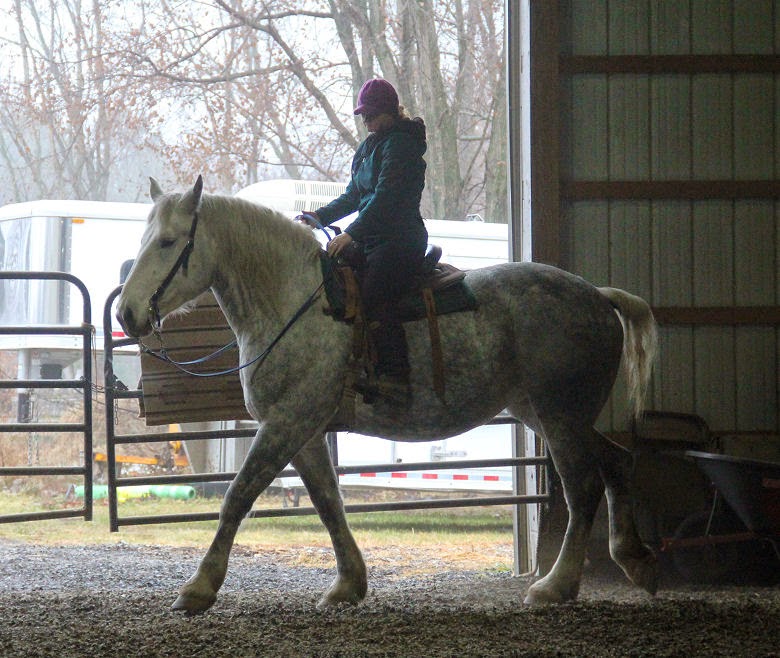 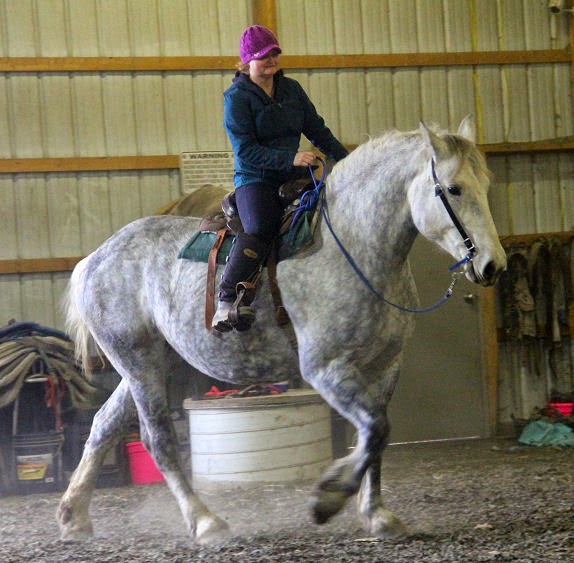 The rain stopped about 20 minutes later so Rhoda took her to the outside arena. The footing wasn't the best but good enough for a work out. Whitney was introduced to the bridge and we are sure she has done that or something like that in her past. She walked right up and stood there, looking back at me as if to say, "are you getting this?". 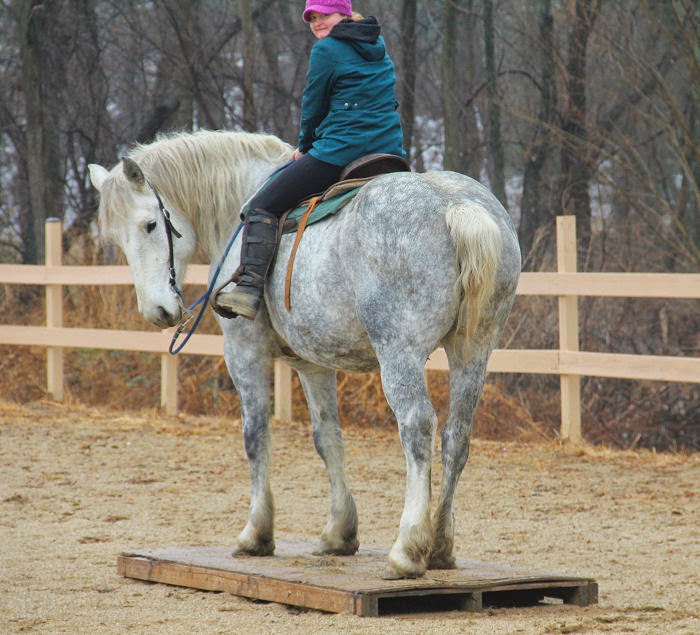 She tested Rhoda a couple times but behaved once she realized Rhoda would not be bluffed into giving up. She learned to stay on the rail at a canter without guidance or reins, at least for most of one round. 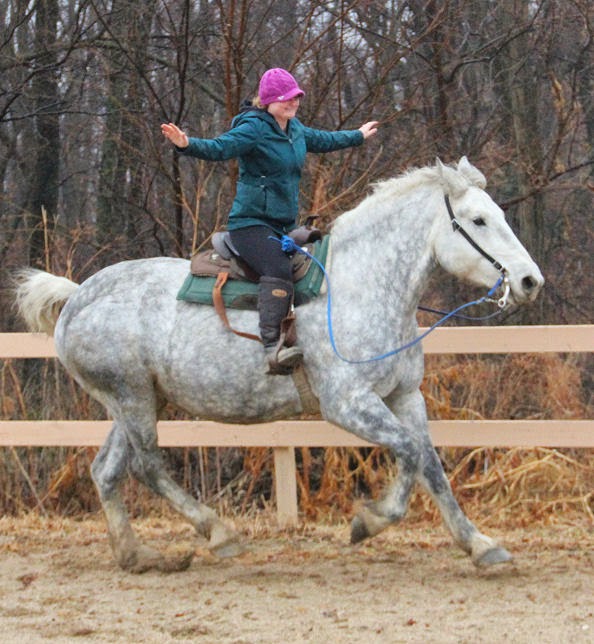 Once Whitney was put away Rhoda got Treasure out to practice loading and unloading. That filly is so smart, she saw the trailer and jumped in without hesitation. 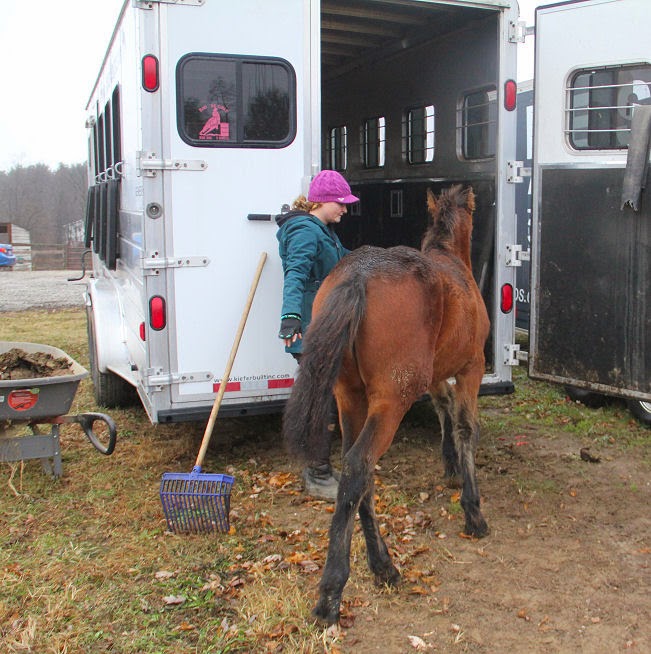 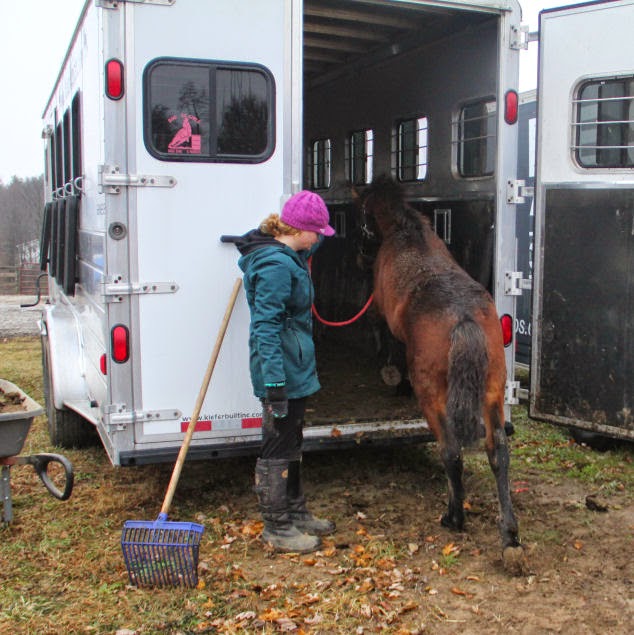 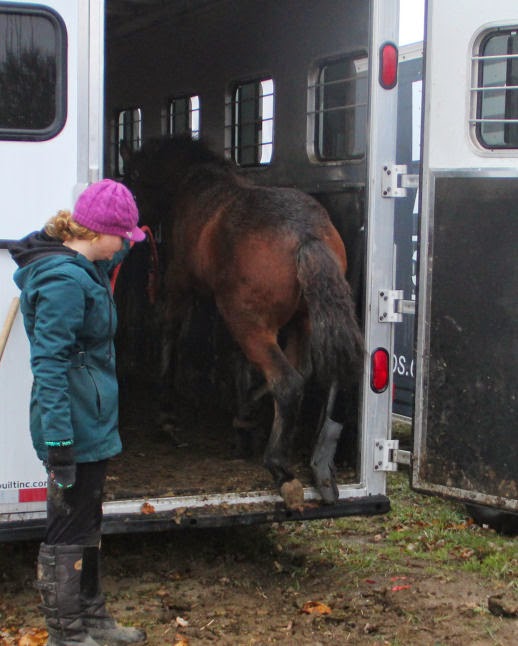 She also got a tying lesson which didn't go quite as well. We had been tying her to a fence where she could see the other horses but today we took her into a stall and tied her, she hated it and did not stand quietly. We have a lady coming tomorrow afternoon to check her out. I hope she remembers her lesson today and does better tomorrow.
The last filly worked with was Oksana. Oksana turned 2 in June and last week Emily and Rhoda introduced her to round pen reasoning then Rhoda  rode her for the very first time. Oksana remembered the lesson well and today was an old pro. 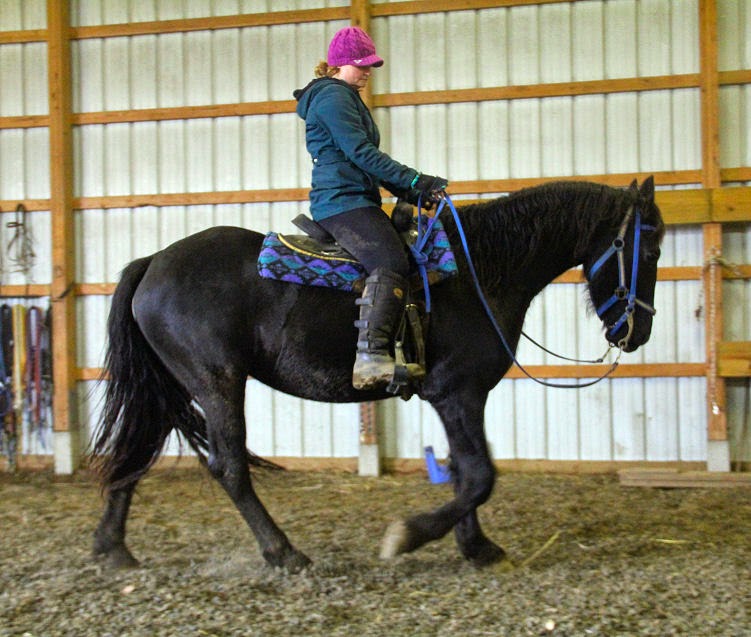 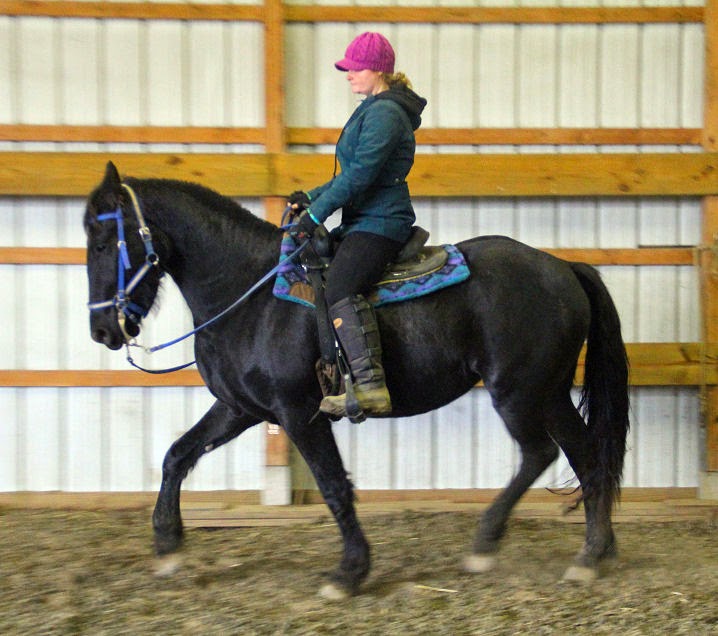 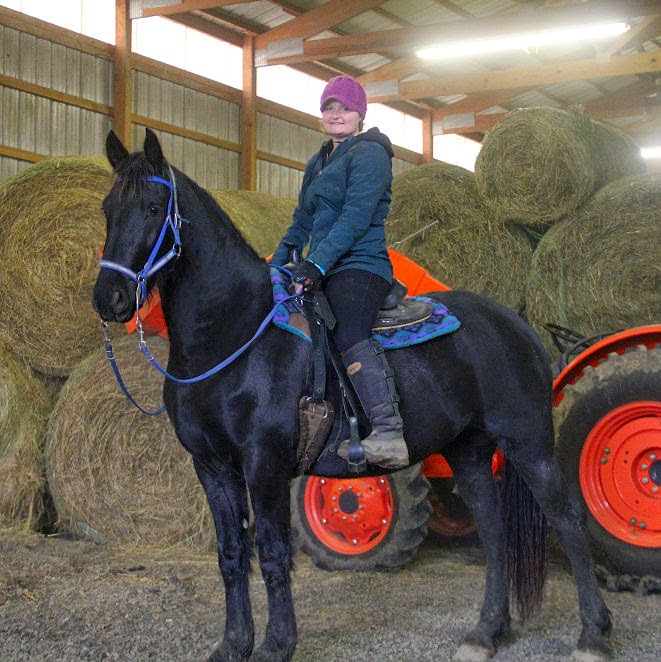 Karin always ends Oksana's training session with some trick training so once Rhoda was finished riding her she asked her to bow, lay down and step up on the pedestal. 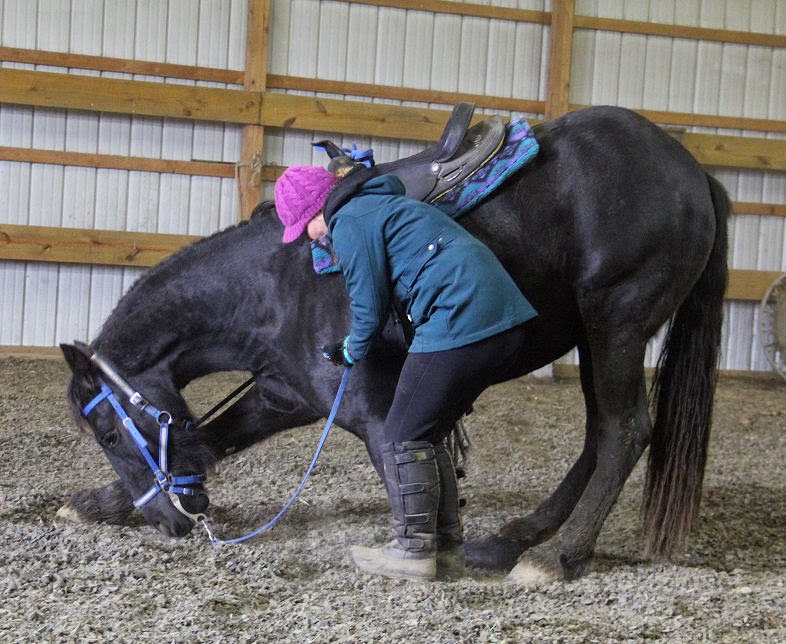 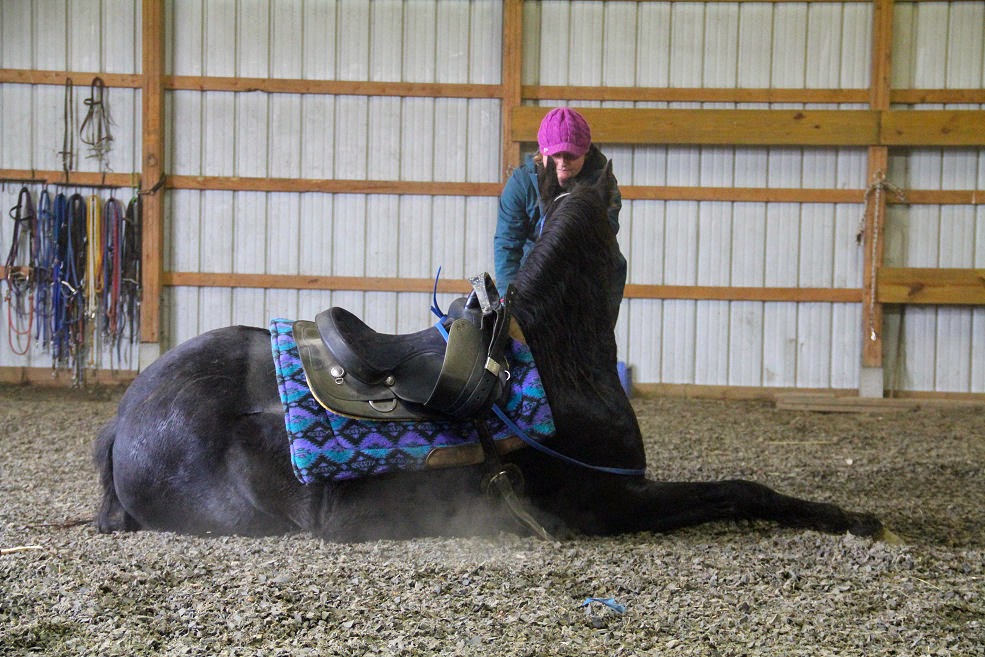 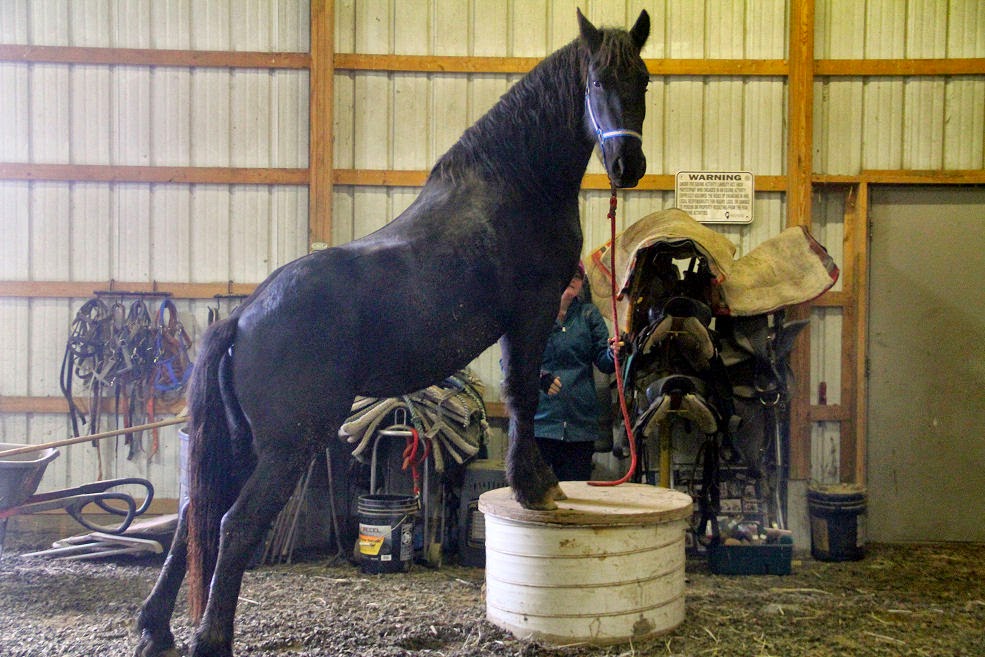 Spark, Rhonda, Mom, Mark and I drove to Eureka for Gail Hodel's mom's visitation. After the visitation we stopped to eat dinner at a little restaurant on the edge of town. Either the food was really good or we were really hungry! We saw Tim Martin there with a couple of his boys. Tim brings the Bibles down to Meisters for us, he told us he was going to bring a couple hundred tomorrow. Our cousin Skip and his wife Pat showed up to eat there also and they were joined by Ron and Carol Kellenburger. As we were leaving the resturant Randy and Evie Mogler were coming in. What a small world.
Posted by Judy Sceggel at 8:05 PM