Mark went for walk yesterday morning and out of the woods came Tumnus who followed him all the way home.  Braelyn gave him some pieces of cut up apple but he only ate a bite. 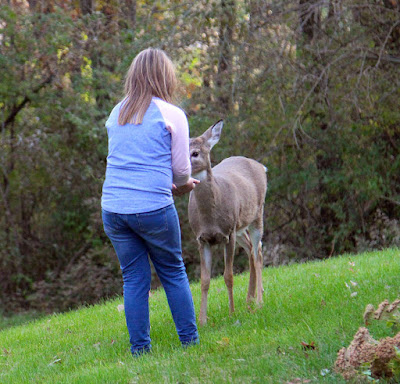 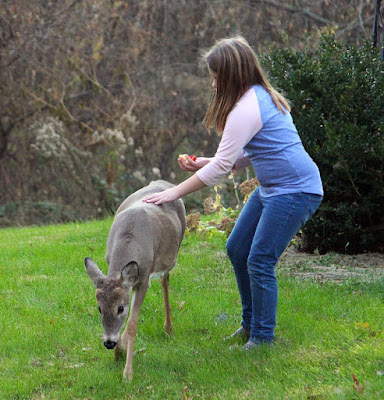 He then wandered over to the side of the yard and started snacking on the weeds. 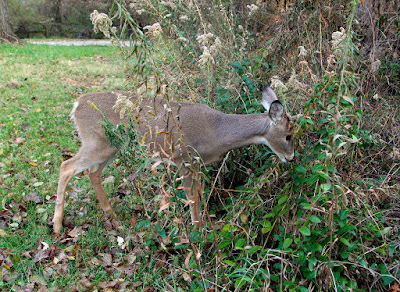 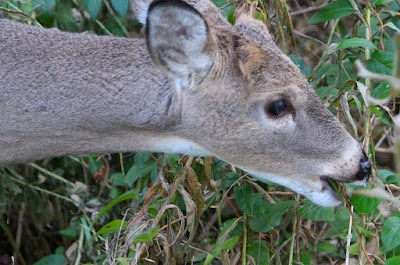 When he was full he looked up, walked over to the road and started walking home. 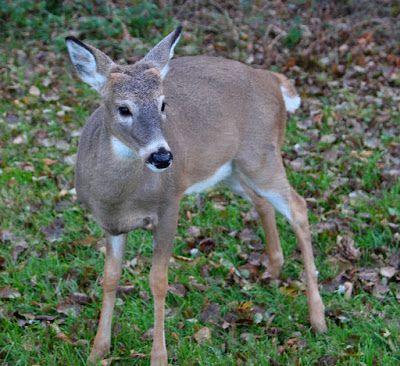 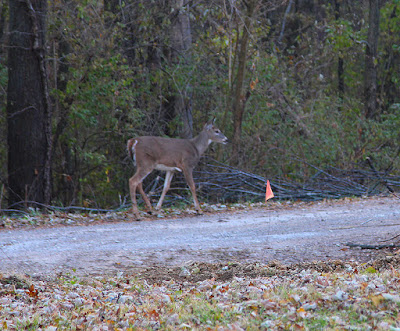 We had a full day. Extra time was planned to drive over to Phil and Anna's house to let Pax out and get the girls dressed for church. Brushing curly hair takes a lot longer than what I'm use to. We still picked mom up on time.  This was Cassie Feuchts wedding day so Peoria was full and I mean really full. The girls were taken down to Sunday school. Braelyn was in Berlica's class, Taegan was in Israel's class and Kensly had Lanae Beutel as her teacher. They LOVED Sunday school. I was serving first shift at lunch so Berlica brought them up and took them over to the children's table for lunch. For the wedding we sat up on the balcony so they could watch the bride walk down the aisle.  Craig  Stickling had the wedding service and had us all chuckling. It was just beautiful. Right after church we drove to Phil and Anna's to let Pax out and change out of our Sunday clothes then back here for a quick dinner of our leftovers from Gils on Saturday night then over to mom's house for a SECOND supper of Cowboy Steak which Karin had perfectly prepared.  Karin and Magda took Valiant and Ayanna out on the trails in the afternoon and Karin had Valiant walk behind Ayanna instead of leading the way and he was again great. Not perfect at the creek crossing as Ayanna is kind of a balker so Karin had Valiant pass and cross first but when he was side by side next to her he let out a kick. Thankfully Karin got after him so hopefully he won't try that again.  When Karin got back she let me know that the owner of Galena's filly was up at the barn. The rest sat down to eat but I took the golf cart over to the barn to take Lyra out of the paddock for them. She brought her family so there were quite a few people there. They were given a leading lesson then left so a bale could be moved into the weanling paddock. By the time they left Lyra was doing wonderful being led around all over. 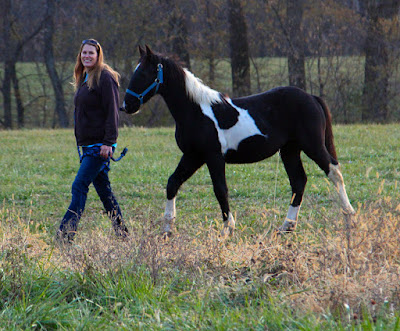 Amy arrived right about then so that gave me a good excuse to head over to mom's with her.  I had to warm up my dinner but it was still delicious.  Amy and I along with the 3 girls stayed all evening first working on the puppy puzzle then playing games.  Nancy is suppose to be back home at 8:00 pm but we didn't leave for Morton until 7:50 pm we were having so much fun.  Mark watched the girls until I got back then they were taken home and I just relaxed on their couch until Phil and Anna made it home at 10:45 pm.  We had one problem and it may end up being a very bad problem but we shall see. The farmer that we bought 42 round bales from doesn't have them and won't be able to get them until next year. His entire second cutting was moldy.  I contacted another farmer that told me they have 450 round bales stored in barns but none near us. We will have to pay shipping to get them and they still haven't given me a price per bale.  If we only had known earlier we could have been looking for hay when hay was abundant.  Oh well guess I'll just have to sell another horse to make up the difference. Another 5 star review came in from our airbnb guests. This absolutely did not disappoint!! The space was perfect. We had a large group and plenty of room. Judith was very accommodating and she even had an air mattress already made up for our group when we arrived. The fresh baked cookies were a very welcome touch and absolutely delicious!! We all enjoyed our stay and no one wanted to leave. The kids really enjoyed feeding the horses as well! Would definitely book again.
I can't thank you enough for the hospitality and allowing us to stay longer because it was so hard for everyone to say goodbye. We loved the space.
Even with the hay stress Sunday was another good day.
Posted by Judy Sceggel at 5:57 AM