We had another good but cold walk. I had to quit after the first round in able to get the Berean mail at TEMCO and get to the Berean office before 9:00 am. We had a good crew of volunteers and was able to get everything done by 11:30 am including unloading a pallet load of Bibles.
As I drove up the hill to my driveway I could see a horse in trouble. At first I thought it was Rosalie but it was her full sister Ayanna who was cast against the back fence of the paddock. Rosalie was standing next to her not willing to leave her sister. I grabbed a lead rope and ran down to try to move her but even with my new aortic artery pumping a hard I just didn't have the strength to even budge this 2000 pound mare. I called Joan to ask her to come help as I was running to the barn to grab a hammer. I was going to try to pound the railing off the post with that. Joan arrived just as I got back with the hammer, at first we both tried to pull Ayanna away from the fenceline but even with two of us pulling we couldn't budge Ayanna. Joan kept hold of the lead rope while I got on the other side of the fence. I was able to move her leg under then gave the railing a good whack with the hammer at the same time Joan pulled. That worked, with Joan's help Ayanna was able to get both legs under and heave herself away from the fence. She stood up and took a few tentative steps, obviously stiff. I'm not sure how long she was down but within a few minutes she seemed to be walking ok.
Only then did I drive back down to the house to unload the car and change out of my skirt.
Karin arrived after work to train. It was only 31 degrees outside with a stiff damp wind so all the training was done inside which doesn't make for good pictures. She took Evan out first to work on his routine for the horse fair. Studley got to come today and had a ball believing he was helping. 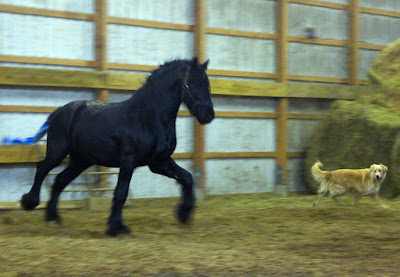 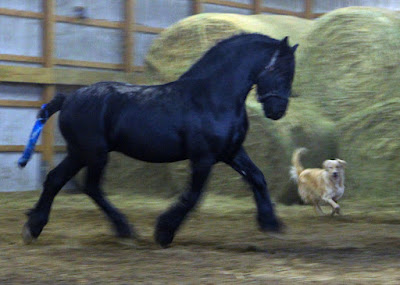 Evan was glad to lay down in the nice soft arena to roll when Karin asked for that. 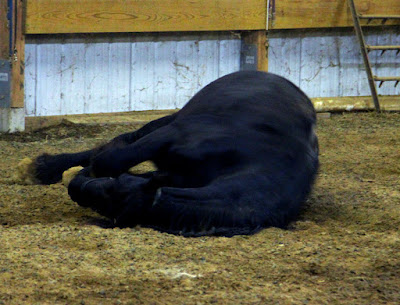 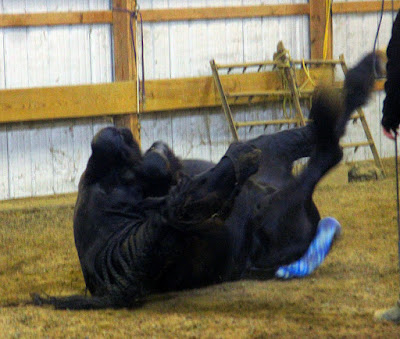 At the end of the training he was following her around like a puppy. 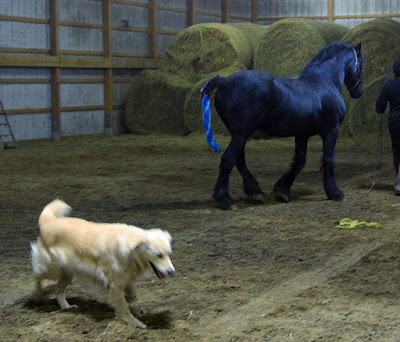 Once Evan was put away we brought in Rosalie, Jenis, Zalena and Galena. 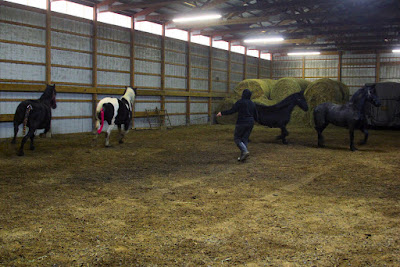 After the initial round pen reasoning with all 4 mares Karin starts the individual training. She spent some time with each mare just petting and grooming a bit.  Rosalie picked out a nice soft spot to roll. 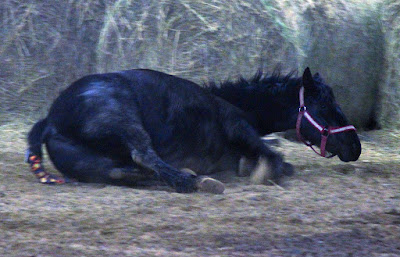 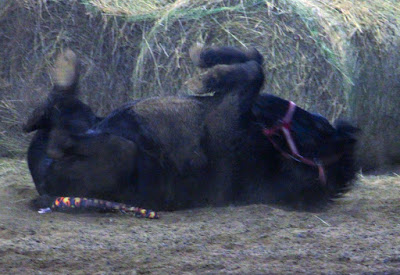 Karin rode her first as she is going to be one of the canter horses in the play. Rosalie has a very balanced canter. 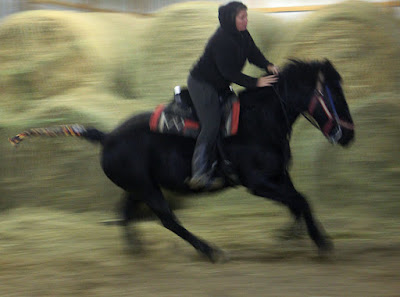 The next mare worked with was Galena. 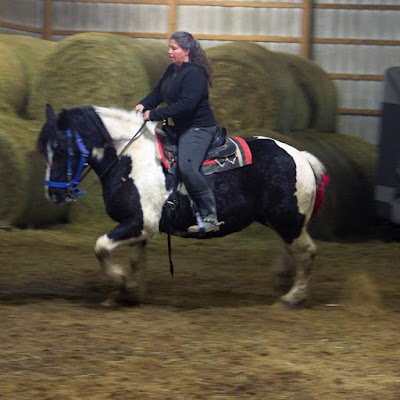 Nolan will be riding Galena for the fair. Last year was Galena's first year showing and she wasn't as well behaved as we had hoped but this year she is much quieter and much farther along in her training. Nolan shouldn't have any trouble at all. 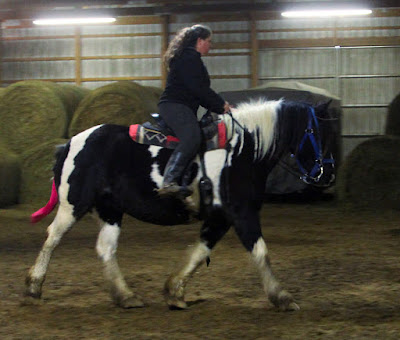 Zalena was next. Caleb will be riding her and she is another canter horse but always has a lot of energy. Karin's job with her is to get her to relax. 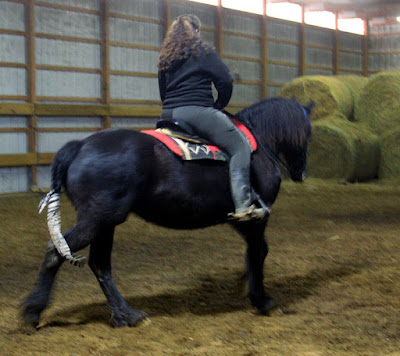 Jenis was the last horse worked today. I think Karin likes to save the best for last. This mare is so smart and so talented. 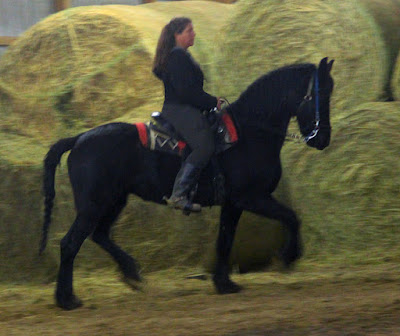 She finished her training with a rear. 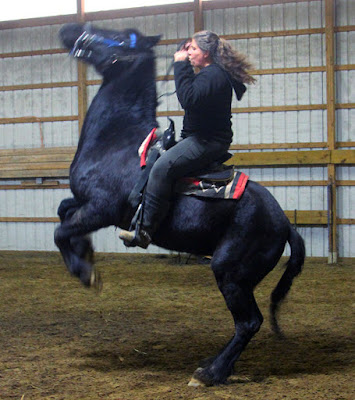 The horses were taken back out and the truck put back inside. 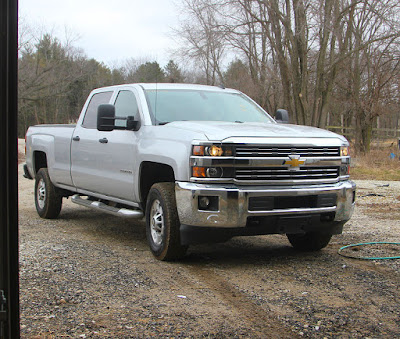 I barely had enough time to get back to the house and start supper before Mark arrived home. He stopped at the Kroger at Madison Park to look for bargains. That Kroger is closing in a couple weeks. It is sad to see that store close.
A nice update came in from Diane M, she brought her mare here to be bred to Evan 4 years ago and wanted to update us on the filly her mare had 3 years ago. She named her Catalina, started her under saddle this past summer. 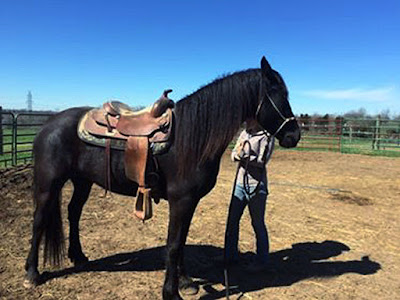 She just came back from her very first show with a FIRST place ribbon. 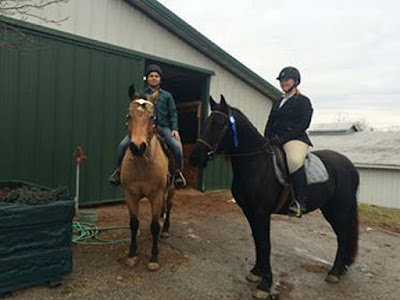 Diane writes: Catalina went to her first horse show after sitting in the field for few months. She had 3 months under saddle and then placed back in the field to grow. She did great, first place in her first class. She is such a smart and athlete mare. Goal this summer is to start dressage and jumping. Such a smart girl. She even did wt class bareback. She reminds me of Evan, she definitely got his hair and such a good brain on her. He really does throw a great mind and lots hair, I was very pleased with her. I hate to say but she is more athletic then my full blooded Friesian and would probably go further in dressage. I have seen her do three flying lead changes under saddle without being asked and she did it with no effort.
What a wonderful update. It thrills me to hear updates like this. We knew Evan was special when we picked him out as a weanling and to see that he throws beautiful, athletic, HAIRY babies that grow up to be sweet, well behaved GORGEOUS show horses is just icing on the cake.
We have lots of Raven daughters we kept which was the reason we bought Evan in the first place. We only have 1 of Evan's grown up daughters which we sold as a weanling and just got her back this fall. Check out the hair on Tatiana (Evan's daughter out of Marika) as a 3 year old. 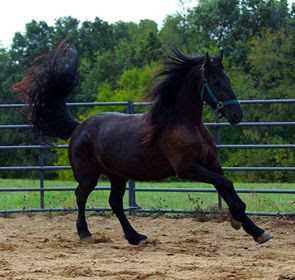 We bred her to Valiant and she is expecting a foal Sept 11th, 2018. This really really makes me want to keep Indy's filly Envy who is by Evan.  She too will grow up with the mega hair, has that amazing movement plus she will be very tall. 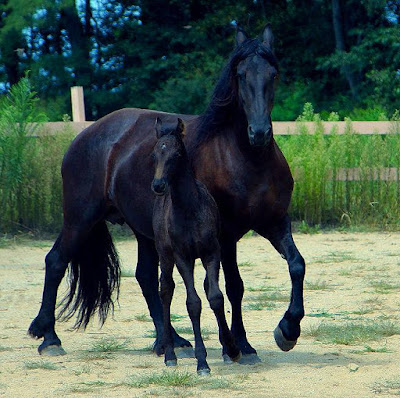 I keep telling myself, "don't get attached to the inventory" but it is really hard when the foal you see outside your window is EXACTLY what we always wanted.
Posted by Judy Sceggel at 8:58 PM