We had a beautiful day yesterday for our last day at Gulf Shores. I ran outside just a little too late to get the sun coming out of the water. 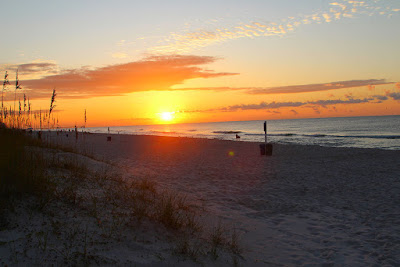 Rhoda and Sarah brought the girls over to play in our pool while Anna and Amy went out to the beach. 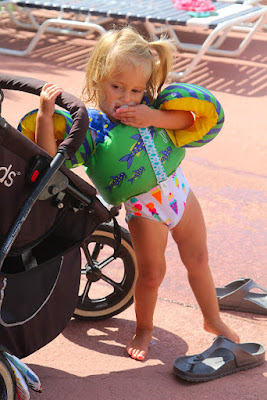 Above Zion saw what she thought was a toy dinosaur. She tried to pick it up and when the lizard jumped, she jumped and cried. 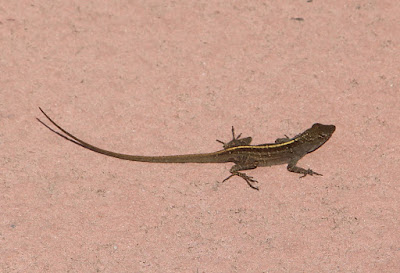 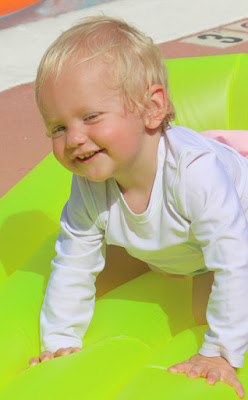 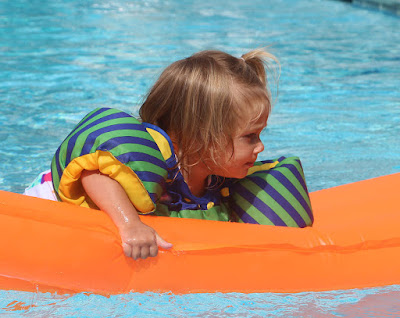 Iris loved putting her entire face in the water. 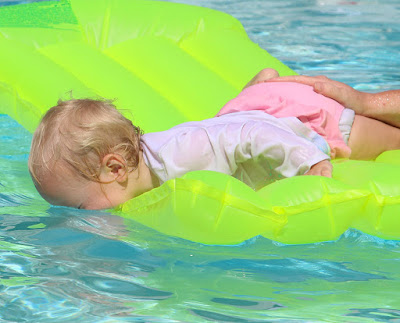 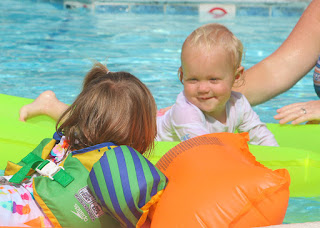 I found a few pictures from Saturday that hadn't been downloaded. Below are those pictures of Iris playing Peek-a-boo and Abe and Zion playing together.. 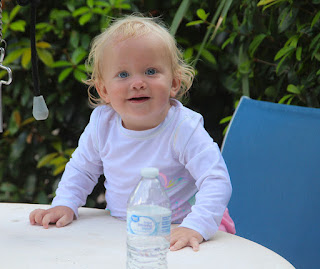 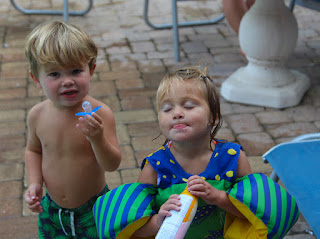 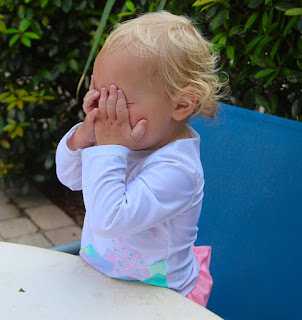 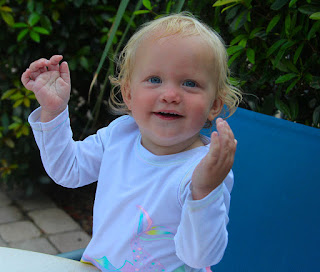 We had everything loaded by 3:30 and pulled out for our long trip home around 3:45 pm Sunday.  We stopped for dinner around 5:30 pm at a Waffle House and the only other stops were for gas.  We made it to Rhoda's house at 6:05 am, Amy's house around 6:40 am, dropped Sarah off at the parking lot next to Hardee's in Bartonville where Nolan was meeting her a little after 7:00 am , dropped Anna off around 7:20 am and finally made it home almost in time for our walk.  I HAD to run in the house though first to grab a coat. It was cold with frost on the windows. Mark was just leaving for work. Right after the walk I went to bed and slept hard until noon then headed out to Middle Grove to check on the horses. Rosaleigh was the first to greet me and I was pleased to see she had put on all the weight she had lost while nursing her big filly. Behind her is Missy. 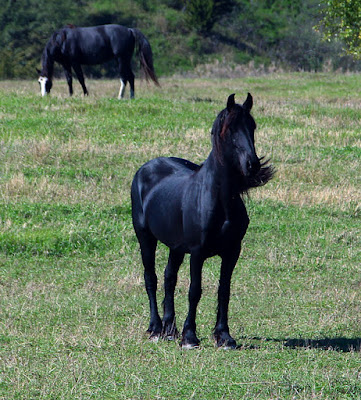 I went out to check on big Rosalie but she was not with her usual companions of Lily and Ayanna, her mom and sister.  Those two were on their way down to drink. 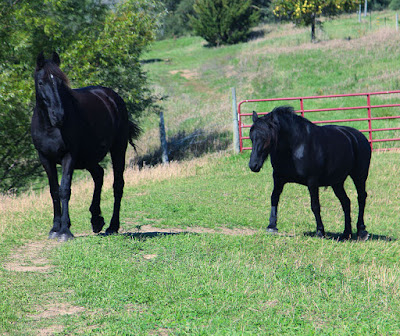 Lily's filly was not with her. 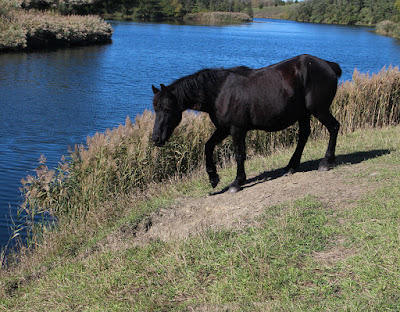 When she made it down to the water's edge the filly came out of the woods and joined her in getting a drink.  Below the filly was noticing her reflection in the water. 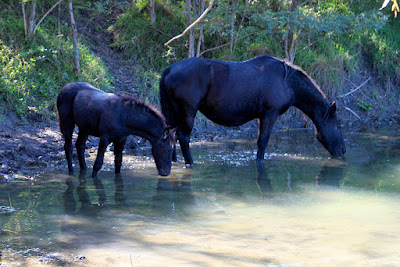 Ayanna's udder was checked and she is not at all bagged up. She isn't due until Nov 26th.  I climbed back up to keep searching for Rosalie and heard horses down in the big grasses next to the lake. 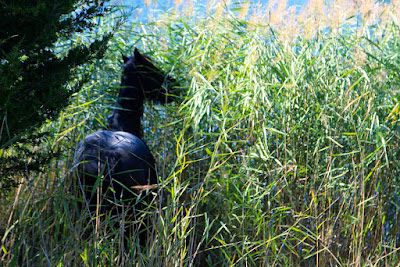 I couldn't tell which horse was down there and hoped it would be Rosalie but when I called it was Indy followed by Lisa and Skye. 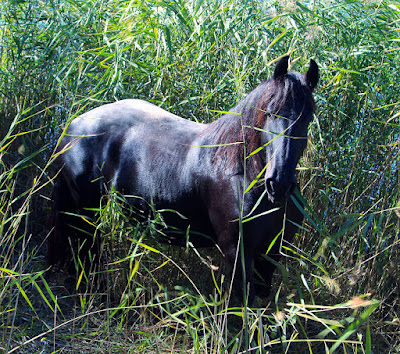 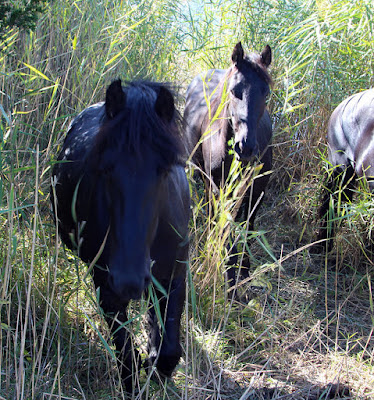 They were eating the seed pods off the top of the grasses and loving it. Above is Lisa and Skye.
There were foals everywhere either up and grazing, nursing or taking naps in the soft grass and warm sunshine. 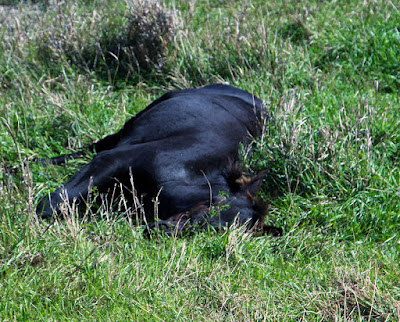 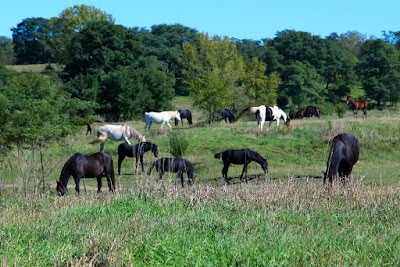 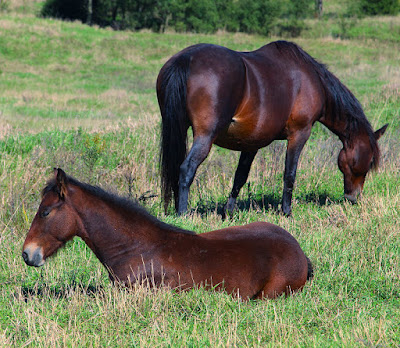 Isla was down at the lake and Ivan was looking for her. She heard him call and headed back up the hill. She is such a sweet yearling. 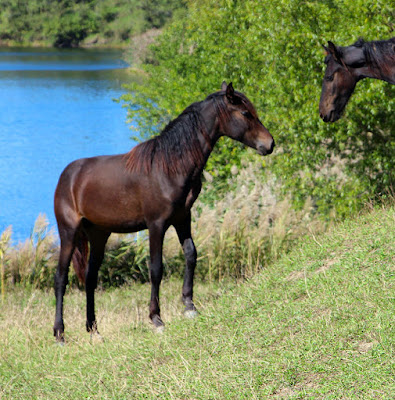 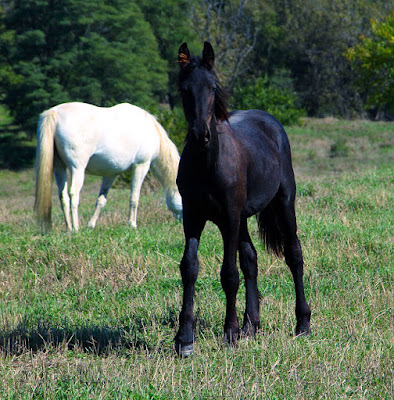 Poor Ivan injured his eye, probably by running through the woods and getting it scratched. I'll be bringing in him tomorrow to see if there is anything to be done for it. 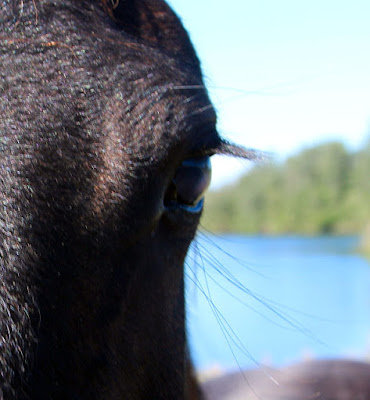 He let me examine it closely, he has scarring but it is not weeping or didn't seem sensitive. Madiera's colt came up for attention. I was trying to get a few pictures of him but he wouldn't let me get far enough away. He kept putting his nose right on the camera. 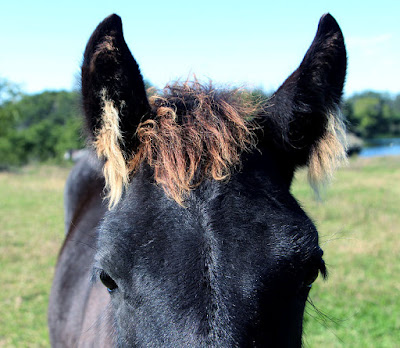 I finally found Rosalie in the woods all by herself. Her udder is not bagged up which is good except she is such a big mare that I can't tell if she had the foal early and lost it.  She just doesn't seem to be as big as she was the last time I checked on her.
Below she is heading up to meet Ayanna so I just have that picture of her rear end. 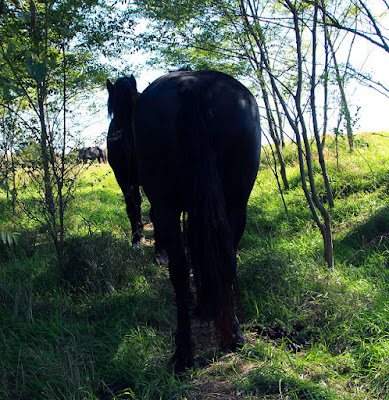 By this time it was after 1:00 pm and all the horses had been checked over. If you would like to see the rest of the pictures from this trip out to Middle Grove click HERE. I snapped the picture below as I turned to hike back to the car. 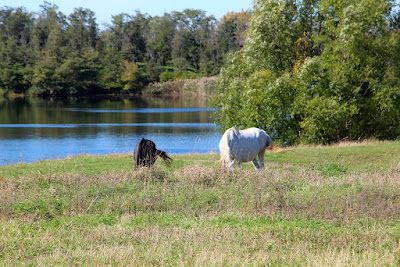 I drove straight up to the apartment to get some of that grass fed beef out of the freezer to start the Berean meal.  Faith, Eden and Ava were in the barn with Oksana and Jenis getting all the burrs out of their manes and tails. These two mares will be putting on a jousting demo on Friday.
Mom was called to see if she had any potatoes and carrots to add to the stew meat and thankfully she did. I sure didn't want to do any more driving today.  I'll be heading to bed in a few minutes and that bed is going to feel SO good.